Home away from home

Many first-year students have concerns about doing well in their classes, fitting in on campus or missing their families.

International students can add the additional pressure of being thousands of miles away from their families, many for the first time.

To help ease the transition to campus for about 140 new undergraduate and graduate international students, the Padnos International Center hosted a half-week orientation in late August.

Kate Stoetzner, director of international student and scholar services, said the orientation is a longstanding tradition but only in the last five years has it preceded Transitions, three days of orientation for all new Grand Valley students. “International students leave our orientation and head right into Transitions,” Stoetzner said. “That way, they’re better able to understand what a liberal education means and better able to connect with faculty.”

Like Transitions, international orientation serves as a time for students to get to know the campus and each other. Through networking sessions, trips to Grand Rapids and Grand Haven, and classroom sessions that cover plagiarism and social media, Stoetzner said her goal is to make sure students feel comfortable on campus and prepared to be successful in the classroom. 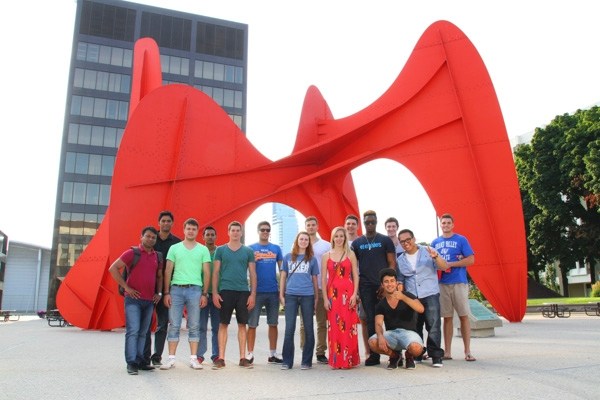 New international students pose in front of “La Grande Vitesse,” an iconic Alexander Calder sculpture, during a trip to Grand Rapids as part of their orientation.

This is a record-breaking year for international students at Grand Valley. More than 400 students are on campus, representing 82 countries. And there are nearly that many different stories of why students chose Grand Valley.

Da-sol Um is a first-year student from South Korea. She never heard of Grand Valley until she attended a master piano class near her hometown that was led by Helen Marlais, associate professor of music.

She later contacted Marlais, who, after watching Um’s piano audition via an online video, helped her secure a scholarship to attend Grand Valley. Um said she is confident in her piano skills, but perhaps not that confident in her English skills.

“I didn’t study English until after I met professor Marlais,” she said. “One year is not really a lot of time to learn English.”

Quang Nguyen is from Vietnam. He applied to four universities with the intent of studying engineering. He chose Grand Valley because of its affordability and beautiful campus.

Secondary schools in Serbia and many other countries give students only one test at the end of the year, instead of relying on multiple exams, group projects and papers. Vidojevic said learning to conduct secondary research was difficult, as was learning how to write in your own voice.

“In Serbia, we would look up what the experts said and copy that in a paper. Why would anyone want to hear from me? I’m not the expert,” she said. 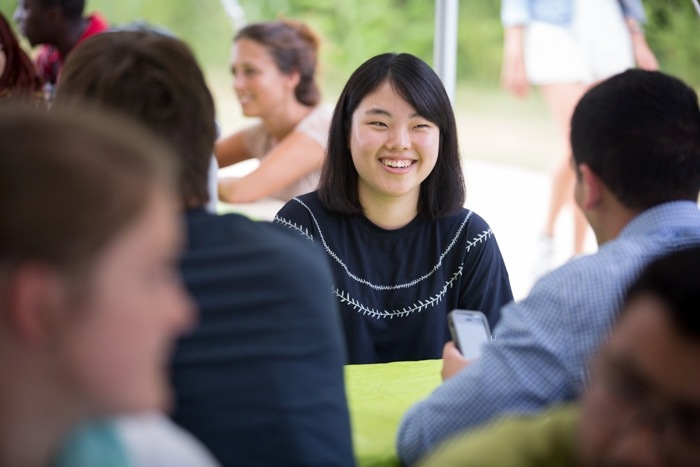 Da-sol Um is a first-year student from South Korea.

Vidojevic now serves as a resident assistant in the international student living center. She’s had many campus jobs, from serving food to tutoring to answering the dispatch phone at the Police Department. She also serves as an officer for the International Students Organization.

Her advice to new international students is to speak up in class and get involved in campus activities.

“Everyone has second thoughts about coming here from another country. I think the more involved you are, the less you will miss your home,” Vidojevic said.

Orientation is not the only program that aims to help new international students feel comfortable on campus. Fit the Mitt is now in its second year.

Faculty and staff members volunteer to serve as mentors to new students, pledging to meet bimonthly for coffee, lunch or to attend a Laker athletic event.