What do you think of when you hear the word “home?” The roof over your head? The people who share your residence?

For 31 young students who participated in the Grandville Avenue Arts & Humanities Cook Library Scholars (CLS) program “home” meant a broad term that rooted them to their diverse and historic Grand Rapids neighborhood and to their parents’ native countries.

Through an oral history project facilitated by Grand Valley’s Kutsche Office of Local History, the CLS students documented the Grandville Avenue neighborhood. Their work — a video documentary and exhibited materials showing 60 years of the neighborhood — debuted at the Cook Library Center in September during Hispanic Heritage Month.

Monica Zavala and her children (all Cook Library Scholars) hold a photo of their house as it looked four decades ago. The photo is from the Grand Rapids History and Special Collections, Archives, Grand Rapids Public Library.

“We’re teaching the kids to be critical thinkers, to take in the reality they know and turn that into a way that empowers them.”
– Melanie Shell-Weiss, director of the Kutsche Office of Local History

“They thought being able to go through the vault at the library was like being able to walk into a bank vault,” Shell-Weiss said.

At the GRPL Local History Office, Tim Gleisner showed students photographs of their houses as they looked in the 1950s and ’60s; the photos were pulled from the real estate holdings collection. Gleisner is the head of GRPL’s history and special collections department and serves on the advisory council for the Kutsche Office. Shell-Weiss said viewing photos of their homes drew insightful comments from the students such as “I belong,” “I matter,” “My house is in the library.”

One young scholar proved historical materials may not always be accurate. After insisting the photo Gleisner showed her was not her family’s house, he conducted further research and found the girl’s address was one of the first Habitat for Humanity homes in Grand Rapids. The house in the photo had been demolished.

Gleisner was among the oral history project facilitators who led students on weekly tours of the neighborhood, noting buildings that have changed hands or other significant structures.

Shell-Weiss said the Grandville Avenue neighborhood —bordered by Wealthy Street (north), Burton Street (south), Century Street (east), and Clyde Park and Godfrey Street (west) — once served as the gateway to Grand Rapids. “No matter where your folks came from or what nationality they were, this is the place people came first,” she said, adding the neighborhood’s access to factories, churches and main roads once made it a desirable location.

Giving the students a sense of place beyond those borders was important, Shell-Weiss said, as all 31 scholars have parents who immigrated to Grand Rapids from Mexico, Guatemala or West Africa.

“For all these kids, their earliest memories are of Grand Rapids. It’s the only place they know. But when you say ‘home’ to them, it means different things,” Shell-Weiss said. “Many of the young people say they long to see the countries where their parents came from and where they still have family.”

Using tablets and audio recorders, students interviewed their parents for the oral history project before learning about their neighborhood. Melissa Baker-Boosamra, CLS program director, said their interview questions were thoughtful. “They asked what it was like to grow up in Mexico, and had many questions about what it was like to cross the border,” said Baker-Boosamra, who taught at Grand Valley before working for the Cook Library Center. 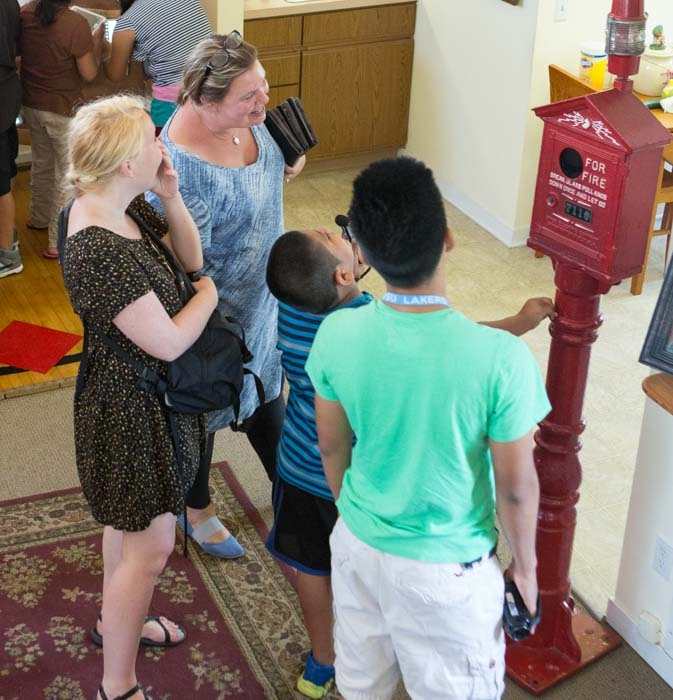 Cook Library Scholars document the history of their neighborhood. Melanie Shell-Weiss is pictured at left in blue.

Baker-Boosamra said the research and critical thinking skills involved in the oral history project support the program’s goals of college readiness and career preparedness. The CLS program is selective; Cook Library Center staff work closely with teachers at César E. Chávez Elementary School and other neighborhood schools to select and invite high-achieving students. The program is supported by grants from W.K. Kellogg, Steelcase, and Wege foundations.

Shell-Weiss said parents played a key role in the oral history project by sharing their stories with their children. “We’ve talked about how space changes. For immigrant families and families that have moved around, we thought this project would anchor them,” she said. “We want the scholars to have a better sense of themselves and how they relate to others.

“You have to see yourself in order to think about your relationships with others.”

Twelve-year-old Angel Cano said the project made him feel proud of his neighborhood. Emmanuel Zavala said he learned his Mexican father made toys from mud and sticks to play with as a child. “This is a really old neighborhood with lots of history,” said Emmanuel, 12.

Shell-Weiss said many parents shared their version of the American dream with their children. The reality is more complicated, she said, as many parents work two or three jobs to make ends meet.

“The next challenge is getting the kids to problematize this. We’re teaching the kids to be critical thinkers, to take in the reality they know and turn that into a way that empowers them,” she said. “We want them to know they can actively shape their own
futures and that of their neighborhood.”

Building leadership skills is an overarching goal of the CLS program. Shell-Weiss said it also works as a college pipeline program. “The literature suggests that to create first-generation college students, the earlier you reach them the better,” she said.

Shell-Weiss hopes to replicate the oral history project in other Grand Rapids neighborhoods. The Kutsche Office will continue its partnership with GAAH, focusing on the neighborhood’s immigrant stories.

Under the umbrella of Grandville Avenue Arts & Humanities, the Cook Library Center offers after-school programs, and adult resources like English as Second Language and computer classes.

The program also engages and supports parents, Melissa Baker-Boosamra, Cook Library Scholars program director, said. Last year, all 18 CLS families came together to discuss the strengths of their neighborhood as well as their concerns. Like parents
everywhere, they worried about how to pay for college, but their immigrant status brought specific problems.

“Communication with the school was difficult, they said, because of the language barrier and other stresses of immigrant families,” Baker-Boosamra said. To better serve parents, the CLS program added a new position: family outreach coordinator. That person would attend school conferences with families, serving as translator and helping parents understand what their child needs to succeed.

They filled the role from the CLS parent ranks; Monica Zavala is a Grand Rapids Community College graduate and recognized community leader with three children in the program.

With support from Grand Rapids Public Schools and other resources, CLS offers monthly programs for parents with topics like establishing a college savings account and accessing school grades online. CLS engages families in the Grandville neighborhood
while supporting and helping prepare students for college. The program is free and supported by grants. With an inaugural class of 31 scholars, additional students will be added until the program reaches capacity at 75. For more information, visit gaah.org.


Page last modified November 6, 2014
Report a problem with this page