When Grand Valley’s Cook-DeVos Center for Health Sciences (CHS) opened in downtown Grand Rapids in 2003, it was called the “jewel of the Medical Mile.”

As Medical Mile has grown, so has the demand for health care programs and professionals. There are currently more than 5,000 students enrolled in Grand Valley’s highly competitive health-related courses and CHS has been overcapacity for the last four years.

“The demand has exceeded our capacity to accommodate students and programs,” said President Thomas J. Haas. “As a result, we are unable to accept all of the qualified applicants for our health sciences programs.”

The location of CHS along Medical Mile was intentional — students in the College of Health Professions and Kirkhof College of Nursing could take classes and then walk across the street for clinical rotations and internships.

“As the leading provider of health care professionals in West Michigan, we need more laboratory, classroom and collaborative workspaces so that we can continue to attract highly talented students, faculty and caregivers to our region,” Haas said. In order to meet the demands of a growing student body and health care industry, Grand Valley broke ground November 22 to expand its health campus in Grand Rapids. 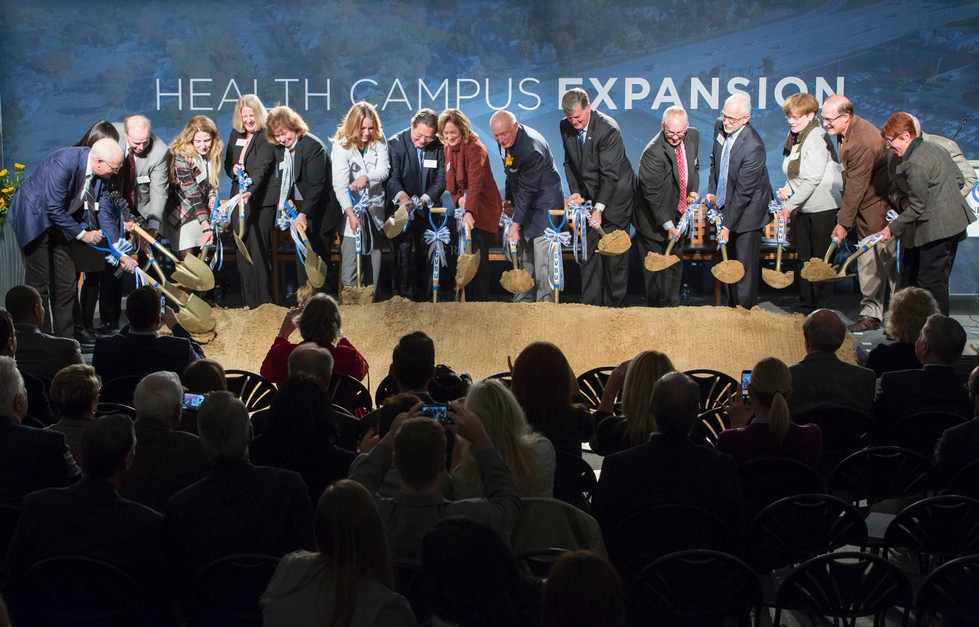 Officials from Grand Valley, the City of Grand Rapids, and Neighbors of Belknap Lookout broke ground for Raleigh J. Finkelstein Hall on November 22.

Officials from Grand Valley, the City of Grand Rapids and Neighbors of Belknap Lookout broke ground in November on Raleigh J. Finkelstein Hall, named for an area business leader. 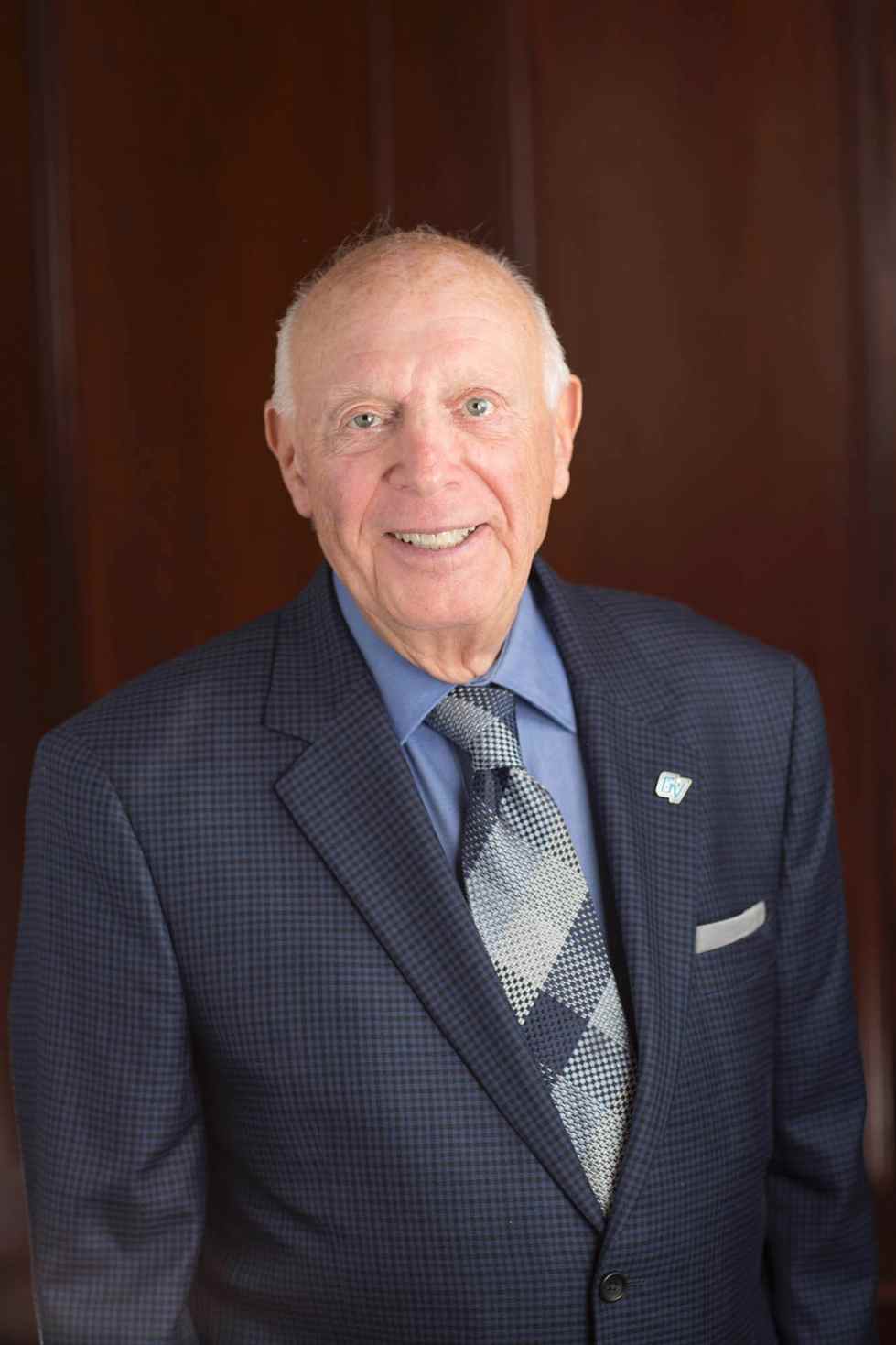 The new five-story, 84,000-square-foot facility is under construction at the corner of Lafayette and Hastings streets, across I-196 and just north of CHS. Finkelstein Hall will include four classrooms, 15 teaching laboratories, a computer lab and 90 faculty and staff offices and parking spaces. It will also have student study spaces and student organization space.

Raleigh Finkelstein, lead donor for the building, helped create and grow his family’s former business, MC Sporting Goods. He said he is excited about what the expansion means for the future of Grand Rapids and the region where he grew up.

“We have the finest health care here in Grand Rapids and Grand Valley plays an important part in that quality. We need more talented Grand Valley graduates caring for our families,” Finkelstein said.

Grand Valley purchased land for the expansion in the Belknap neighborhood of Grand Rapids in 2013. Joseph D. Jones, Grand Rapids Second Ward city commissioner, said the neighborhood is getting more than a new health building. He called the teamwork among university, city and neighborhood officials “a model for what’s happening in Grand Rapids” and described the project as a turning point for the city.

“This is about the power that happens when a team of people can do something that has never been done before in a neighborhood in Grand Rapids,” Jones said. “Authentic, beneficial dialogue and negotiations led to an understanding that is inclusive of affordable housing and economic opportunity for local residents.”

Grand Valley is at a crossroads because of multiple changes in the health care industry that have resulted in the need to expand and add select academic programs to support the delivery of quality care to our community, said Jean Nagelkerk, vice provost for Health.

“In order to design and implement optimal learning experiences for students, we must expand our laboratory and simulation space to effectively support our students in developing their clinical skills,” said Nagelkerk.

Cynthia McCurren, dean of the Kirkhof College of Nursing, said the health campus expansion will allow the university to continue to prepare students to be the professionals of tomorrow.

“We are focusing on person-centered care, understanding the use of information systems, the use of best evidence to bring about the best outcomes, and using a team-based approach,” said McCurren.

Roy Olsson, dean of the College of Health Professions, said the university will be able to continue to offer a wide range of programs. “We want to offer cutting-edge programs that are new on the horizon and be able to offer those types of services to our students and the community,” he said.

Kristine Todd, director of professional practice and development at Mercy Health Saint Mary’s in Grand Rapids, works with nursing students who are doing their clinical rotations at hospitals. She said Grand Valley has a reputation for producing quality graduates.

“Grand Valley has an intense program, and I say that with a positive reflection on the program,” said Todd. “The students are very well-prepared, both clinically and with practical experience, when they come to the hospital.”

Christina Platko, ’11, works as a physical therapist at Mary Free Bed Rehabilitation Hospital in Grand Rapids. She said her profession is “hands-on,” and that’s the type of education she received at Grand Valley. “Professors take the extra time and energy to apply things clinically,” said Platko. “Anyone can provide the course work and the didactics, but the professors relate what we’re learning to actual patients and clinical decision making; that is what made a big difference for me.”

Nursing and health professions students have a pass rate on their specialty examinations that far exceeds national benchmarks, with 90-100 percent passing on their first attempt.

The budget for Finkelstein Hall, $37.5 million for the building project and $9 million for the parking project, is being funded by donor support, university-issued bonds and campus development funds. The fundraising campaign continues and construction is expected to be completed in May 2018. The health campus expansion will take place over the next several years and includes an additional health building that is contingent on legislative and donor support.

The State of Michigan has authorized Grand Valley to plan for an expansion of CHS. This action allows the university to qualify for construction funds in the near future for a proposed building adjacent to CHS on Michigan St. NE.


Page last modified March 9, 2017
Report a problem with this page