While attendees at a Senate subcommittee meeting were tuned in to the testimony given by President Thomas J. Haas and other university presidents, a few people concentrated on the furniture in the room.

A brand-new chair built by a West Michigan firm made its debut February 27 in Loosemore Auditorium at the Michigan Senate Higher Education Appropriations Subcommittee meeting, thanks in part to research by a Grand Valley faculty member.

Barb Hoogenboom, associate professor of physical therapy, met izzy+ CEO Chuck Saylor when he needed therapy for a back injury in 2007. She said he was interested in “excellent sitting” and wondered how an office chair could influence that. 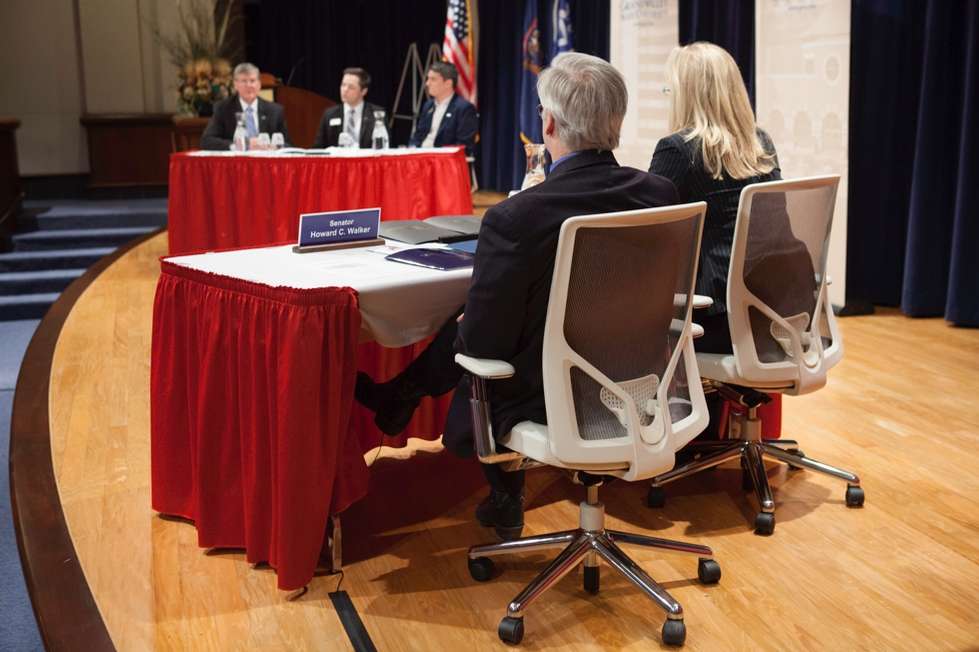 Chairs from a West Michigan firm were designed with research help from a physical therapy professor. The Wabi chairs debuted at the DeVos Center during a state Senate hearing.
photo by Bernadine Carey-Tucker

Hoogenboom and several graduate assistants used the biomechanics lab and researched chair comfort and support, and enlisted opinions from many people in the College of Health Professions. “We have additional long-term research studies planned now that the development of the chair has progressed and it’s been released,” she said.

One of the chair’s differences is in back support. Instead of lumbar support, the Wabi chair focuses on the seat pan to build a better seating position.

Saylor said: “I really value the university’s support and partnership. This is a tremendous asset to area businesses.”

Hoogenboom offered advice for office workers who sit for long periods of time. “Limit time spent sitting, or break up work tasks to allow for movement,” she said. “When sitting, maintain excellent posture in a workplace designed for optimal posture and work.”

The launch of a new degree program for working adults shows that Grand Valley is meeting the needs of nontraditional students in an innovative way.

The Center for Adult and Continuing Studies has started recruiting students for a cohort in the Liberal Studies Leadership Program, a 19-month accelerated degree program. Simone Jonaitis, executive director of the CACS, said the program will meet the needs of working adults and their employers.

“People with strong theoretical knowledge and practical experience in leadership are needed in today’s workforce,” Jonaitis said. “This program will focus on helping students develop the skills needed to advance in jobs or pursue new careers.”

The program will start in Grand Rapids in the Fall 2014 semester. Qualified students will take one five-week class at a time. Students who will best qualify will have earned about 72 credits, are at least 24 years old with two or more years of work experience, and are highly motivated.

Judy Whipps, professor of liberal studies and philosophy, helped develop the program’s course content. She said the program will give adult learners practical skills and engage them in the “reflective practice that is at the core of liberal education.” Whipps added that leadership studies fulfills those two goals.

“The leadership program provides an opportunity for students to enhance current skills and build new capacities; it also is flexible enough to apply to many different fields of work,” she said. 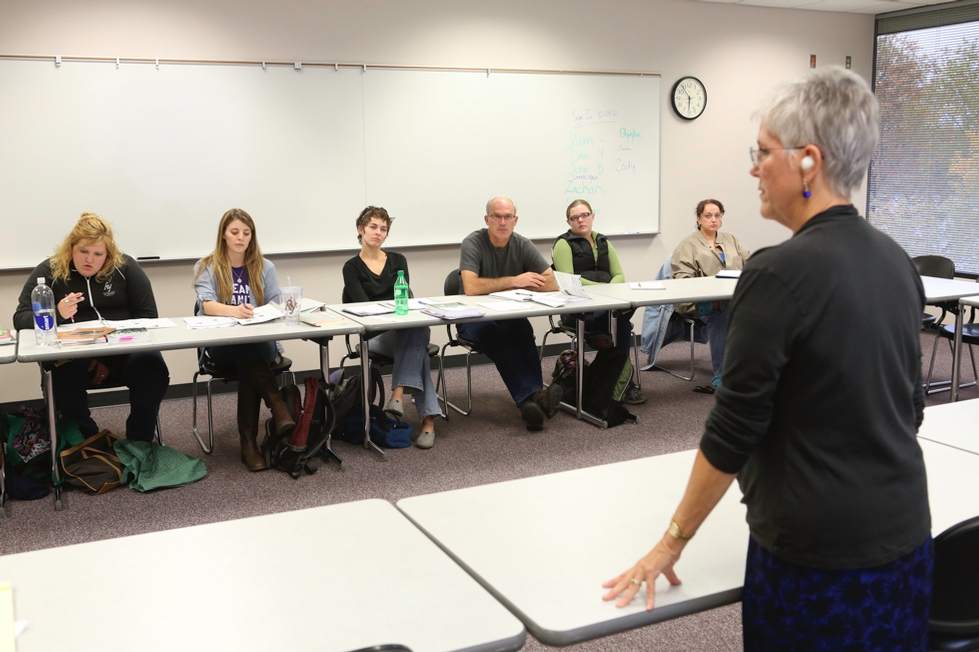 A new accelerated degree program will begin in the fall, targeting working adults who want to complete a liberal studies degree in less than two years.

The CACS piloted a similar liberal studies degree program with an emphasis on leadership at the Muskegon Center three years ago. Whipps said that pilot program enabled faculty and staff members to determine which courses best suited the needs of adult learners. Details about the program are online at www.gvsu.edu/lead19.

Snyder said Michigan remains the center of the auto industry with more than 60 of the country’s top auto suppliers and 375 research and development centers located in the state.

“My job is to create a successful environment so our automotive industry can continue to be globally competitive,” said Snyder. “The Michigan business tax is dead and that was the dumbest tax in the U.S. We had too many regulations so we cut 1,500 of them that didn’t make sense.”

Snyder said a key to keeping young talent in the state is to better promote the benefits of high-tech auto industry jobs. “One of the most important things we can do is train more people for these skilled jobs. There are more jobs available than workers to fill them,” he said. 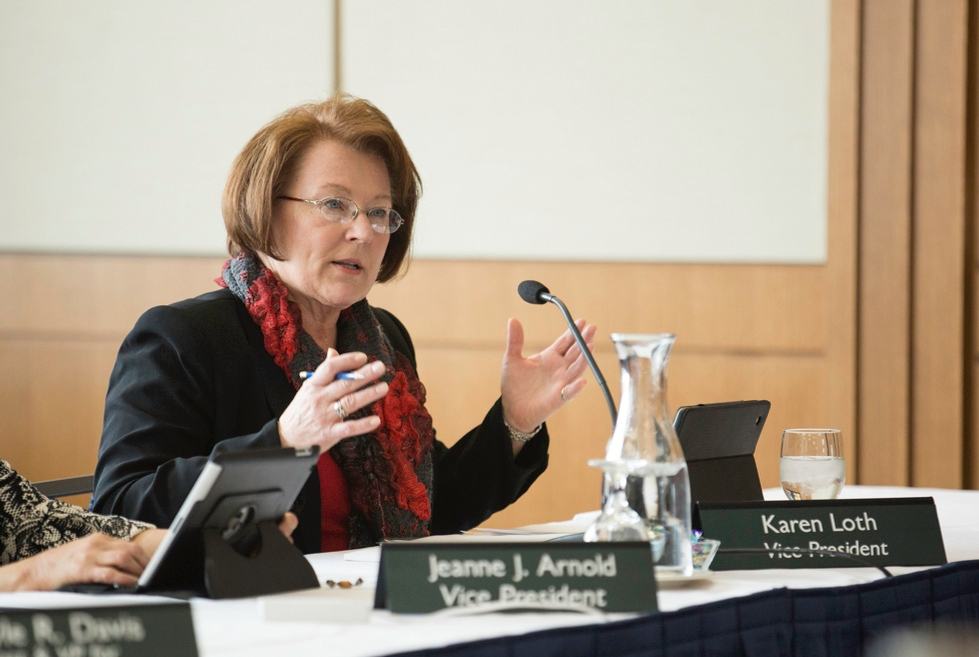 Karen Loth, vice president for University Development, discusses a record endowment during a Board of Trustees meeting. Board members also approved expansion plans for Kleiner Commons.
photo by Amanda Pitts

Grand Valley leaders reported that the university’s endowment surpassed $100 million at the April 30 Board of Trustees meeting.

The majority of the fund is dedicated to scholarships and academic programming. The university’s 10-year return is in the top 10 percent of the 835 colleges and universities participating in the National Association of Colleges and Universities Business Officers Survey.

At the February 14 board meeting, trustees approved a modest increase in room and board beginning with the fall 2014 semester. Trustees voted to increase the rate 1.5 percent. The cost per semester in a traditional living center at Grand Valley will be $2,750, an increase of $10. Students can choose from a variety of meal plans. The cost for the 14-meal plan per semester will increase $50 and cost $1,350.

• The board approved the purchase of 18 acres of vacant land off Lake Michigan Drive on the west side of Grand Rapids to serve as a commuter lot for students, faculty and staff members who ride The Rapid bus to campus. Bus ridership by the campus community exceeds 3 million rides per year, lowering fuel costs and the carbon footprint. The purchase of this land, which has immediate access to Lake Michigan Drive, will pick up the overflow parking. The university will pay $1.249 million, excluding closing costs, and the money will come from the Campus Development Fund.

• The board approved site and floor plans for a $7.5 million expansion for the Kleiner Commons dining facility. The project calls for an additional 18,000 square feet for food preparation areas, seating areas, food storage areas and a multi-purpose space for faculty and administrative support offices. Construction is scheduled to completed in August.

A group of students won the Masco undergraduate prize at the Michigan Collegiate Innovation Prize in Ann Arbor in mid-February.

Team Fluition, comprised of three product design and manufacturing engineering students and two business students, developed a device that helps hospital patients move from sitting to standing. The students competed against 16 teams from Michigan institutions and won $20,000 to commercialize their product.

The competition, hosted by the Center for Entrepreneurship at the University of Michigan College of Engineering, is a six-month program that enables teams to go from an idea to venture launch. Team members were trained and paired with mentors to help them move their company forward and learn the skills needed to start a successful company. 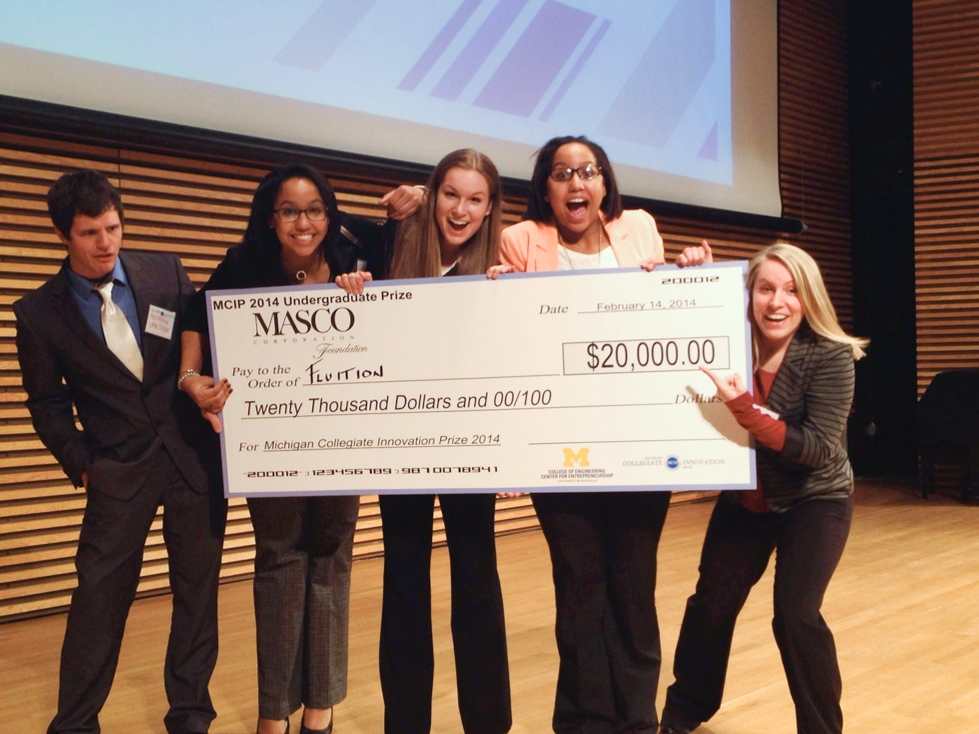 Brittany Taylor, a business major, said the team plans to use the prize money for a consultation with a patent lawyer and to manufacture three devices to be placed at selected hospitals for testing purposes.

The project began in October in a product design class led by John Farris, professor of engineering. He connected the students with physical therapists at Spectrum Health who expressed a need for a different sit-to-stand device.

Leah Bauer, a product design and manufacturing engineering major, said the device was designed to be used in critical care centers to provide staff with an easy patient loading system and patients with proper standing motion. “We believe our device will improve
the comfort of the patients while decreasing their time in the hospital or care center,” said Bauer. “We designed it to be easy for medical staff to use, reduce the risk of injury associated with lifting patients, and decrease the number of staff needed to operate the device.”

Resource Center to be named for Ford

The LGBT Resource Center at Grand Valley will be named for Milton E. Ford, professor of liberal studies and founding director of the center. Ford died March 19 after a long battle with cancer. He was 72.

The LGBT Resource Center opened its doors in the Kirkhof Center in 2008. At the time, Ford said the office space represented important progress for the university to recognize a need for students to feel comfortable and for everyone to be treated equally.

“It is very fitting that the LGBT Resource Center be named in Milt’s honor,” said President Thomas J. Haas. “Milt was instrumental in creating a positive environment at Grand Valley where people know that inclusion and diversity are valued. Through diversity we become a university.”

Ford joined Grand Valley’s faculty in 1973. A compassionate teacher and lifelong researcher, Ford is remembered for leading efforts to integrate the LGBT community with university academics and its student life.

Film by alumnus premieres aboard ISS

Alumnus David J. Ruck’s new film, “I Want to Be an Astronaut,” had an orbital premiere aboard the International Space Station, with an audience of astronauts from around the world.

Developed over the past two years, the 38-minute documentary tells the story of Blair Mason, a young man striving to become an astronaut at a time when space exploration has moved out of the spotlight. Ruck delves into the specifics of what it takes to be an astronaut and what is being done to keep such dreams within the realm of possibility.

Ruck sent the film’s trailer to Space Station flight engineer Rick Mastracchio via Facebook. The astronaut was so intrigued, he asked if it was possible to view the entire film. Ruck worked with the Johnson Space Center to facilitate an upload.

Ruck said he wanted to make a film that explored the human side of the space program and whether or not kids today still dream of being an astronaut. By following Mason from his role as leader of his high school robotics team, to his entry into the U.S. Naval Academy, Ruck discovered a very thoughtful student with a full vision of space exploration, including the political, social and technological issues.

“This film also draws attention to the importance of the STEM education fields — science, technology, engineering and math,” said Ruck, “as they relate to our nation’s ability to remain on the cutting edge, and where we might be headed if we fail to inspire young people to pursue these fields.” 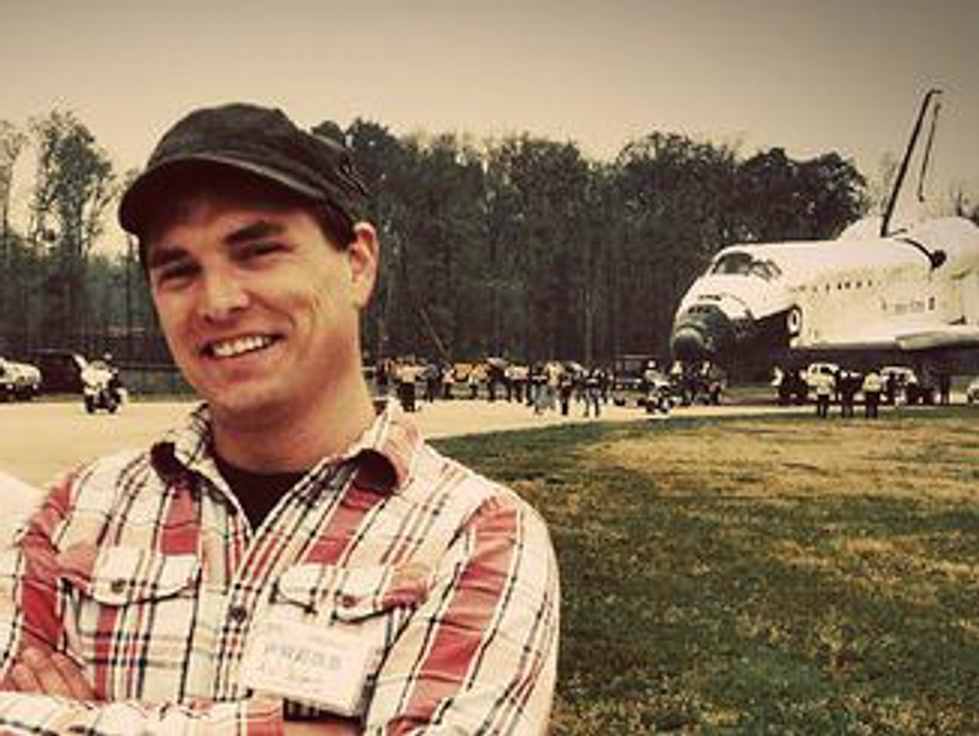 David Ruck, '04 and '07, created a film that premiered aboard the International Space Station.

A glimpse into current NASA efforts, amid a post-space-shuttle era, is provided through interviews with some of those who understand it best, including Charles Bolden, a NASA administrator and John Glenn, a Mercury 7 astronaut, first American to orbit the Earth, and retired U.S. senator.

Ruck received both bachelor’s and master’s degrees from Grand Valley’s School of Communications in 2004 and 2007, respectively, and earned a master’s of fine arts degree from American University, in Washington, D.C. He currently lives in Bethesda, Maryland, and is president of Rubangfilms, a small production company that focuses on subjects that involve science, exploration, history and space.

For more information about the film, visit www.davidjruck.com/iwanttobeanastronaut.


Page last modified April 24, 2017
Report a problem with this page