Tim W. Selgo, who has led Laker athletics for two decades, will step down following this academic year. Selgo was appointed athletic director in 1996 and put his own stamp of leadership on varsity athletics.

A promoter of a well-rounded athletic department, Selgo has been a key figure in the Lakers’ rise to the top of NCAA Division II athletics. Grand Valley has finished among the top two in the Learfield Sports/NACDA Directors’ Cup standings for 14 consecutive years, including 10 titles; the university has also won 17 straight Presidents’ Cup titles as tops in the Great Lakes Intercollegiate Athletic Conference.

“The past 20 years have been a wonderful professional experience, more than any one individual could hope for,” Selgo said. 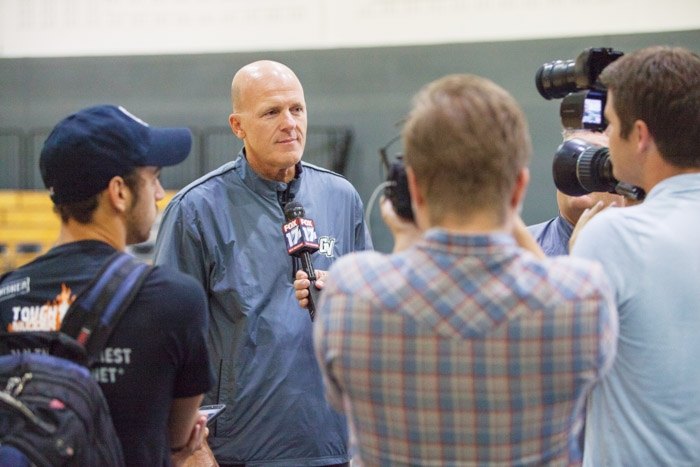 “I have had the privilege of working at a great university with very talented and hard-working people who care about students. That combination leads to success and this university is certainly one of the greatest success stories in the history of higher education in this country.”

“Tim’s leadership as athletic director is evident in the myriad of accomplishments made by our student athletes and our teams over these past two decades,” said President Thomas J. Haas. “Ten Directors’ Cup titles during his time is the ultimate testimony. I will miss his passion for student athletes and how he was able to create the environment for success through hiring great coaches, creating the sports complex, and most importantly stressing and achieving student success in the classroom.”

Selgo has been a key figure in the development and enhancement of the athletic facilities and programs at Grand Valley. Lubbers Stadium was renovated in 2011, adding seats to increase capacity to 10,444, and installing a new fieldturf artificial surface. An outdoor track and field/lacrosse stadium opened in 2011, and the Kelly Family Sports Center opened in 2008. The Laker softball team began play on its new field in 2008 and the Laker baseball field added stadium seating in 2010. The GVSU Football Center has been expanded since Selgo’s arrival, lights were installed at Lubbers Stadium and the Rob Odejewski Weight Room was built in honor of the late assistant athletic director.

A professor, 12 Grand Valley students and an international team of archaeologists unearthed a massive gate at the archaeological site of Tell es-Safi in Israel, which may have marked the entrance to the ancient biblical city of Gath. The city is thought to be the home of Goliath, the giant warrior whom the young Israelite King David bested with a sling.

Elizabeth Arnold, associate professor of anthropology and member of the excavation team led by Aren Maeir of Bar-Ilan University in Israel, said that Gath was occupied until it was destroyed following a siege around 830 B.C. It has been depicted as the most important of the five principal cities of the “Philistine Pentapolis,” along with Ashdod, Ashkelon, Gaza and Ekron.

“This discovery shows the powerful status of Gath during the time of the early Israelite monarchy in 9th or 10th century B.C.E., meaning the Judahite kingdom could not have controlled Philistia until after Gath was destroyed around 830 B.C.,” said Arnold.

Along with the monumental gate, the team also exposed the remains of a fortified wall, temple, iron production facility, pottery and other objects typically associated with Philistine culture. Arnold added that the team found evidence of widespread destruction that took place in the city after the Aramean siege of Gath, as well as the earliest known siege system in the world comprised of manmade trenches surrounding the site on three sides. 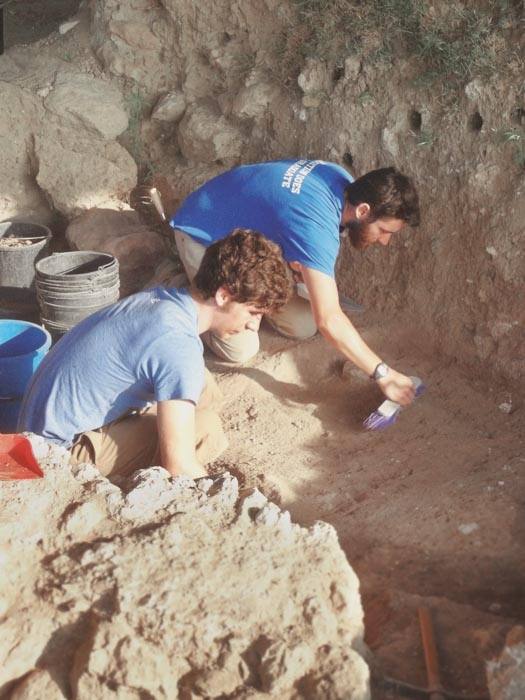 Students Keegan Brewster and Jesse Dedic excavate in an area of the City of Gath archaeological site. A Grand Valley team joined international archaeologists and unearthed a massive gate that may have marked the entrance to the biblical city.
photo courtesy of Elizabeth Arnold

“Every find has significance, but the ones we found really opened the gates, figuratively and literally, to what the biblical city of Gath contained, and what happened to it and its inhabitants,” said Kelly Darcy, a junior majoring in advertising and public relations. “The more we dug, the more artifacts we found, thus giving us a better idea of what the households we were working in really looked like, what every day life was like and what the occupations were.”

Other students were Keegan Brewster, Parryss Carter-McGee, Jesse Dedic, Kimberly Crago, Kara Larson, Emily Gilhooly, Robert Tissot, Natalie Renkes, Dylan Rowe, Gabe Hessenthaler and Christopher Long. Arnold said more students will receive the opportunity to participate in this ongoing research in Israel at the site through this program in 2017. For more information about these discoveries, visit the expedition blog by clicking here.

A scholarship has been created in memory of Richard Wheeler, an alumnus who died in August while battling wildfires in Washington.

The Richard Wheeler First Responder Memorial Scholarship will be available to students who are dependents of those who have died as first responders, including firefighters, police officers and paramedics.

Wheeler, from South Haven, graduated from Grand Valley in 2013 with a bachelor’s degree in natural resources management. He was one of three firefighters who died in Twisp, Washington.

“We are deeply mourning the loss of Rick,” said Neil MacDonald, chair of the Biology Department. “Rick was a very hard working and diligent student. He was pursuing what he wanted in life, and we are all extremely proud of him.”

The ceremonial start of the academic year began August 28 with speakers giving advice to new students about getting connected and studying hard in order to make the most of their college career.

It started also with President Thomas J. Haas engaging faculty and staff members during his opening address in a discussion about the “Grand Valley advantage” and how that formula of success will fit into the university’s strategic plan.

Convocation at the Fieldhouse was highlighted by the presentation of an honorary degree to entrepreneur and inventor Dean Kamen. The inventor of the Segway and other innovations, Kamen explained that while he never earned a college degree, he understands the value of an education. His message of connecting with students and faculty members on campus was similar to other speakers. 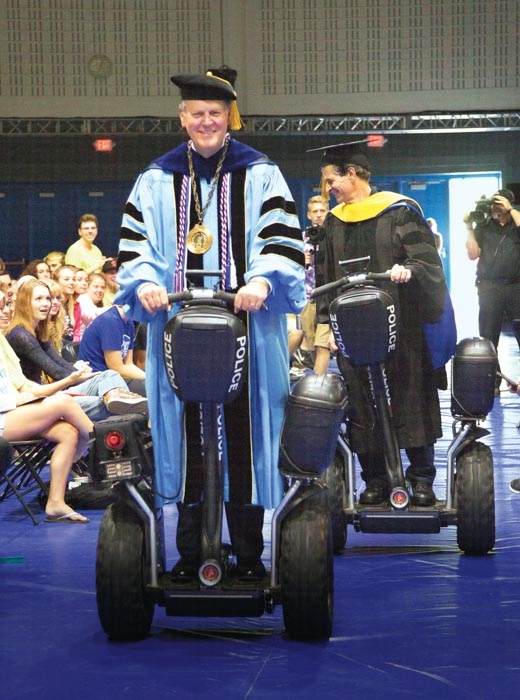 “I sat in the offices of many faculty members; sure I studied but what makes a university isn’t the textbooks, they’re all the same,” Kamen said. “It’s the quality and access to the faculty.”

Kamen is founder and president of DEKA Research and Development Corp. and the founder of FIRST (For Inspiration and Recognition of Science and Technology). While he has given many commencement addresses, this was the first time Kamen was invited to give a speech at the start of a university’s academic year. He challenged students to find important problems to solve, and not to give up.

Gayle R. Davis, provost and executive vice president for Academic and Student Affairs, addressed the audience and said she and other speakers shared a commonality with one-third of the new students present: they were the first in their families to attend college.

“There was an added pressure for us; it was a new world and our futures seemed uncertain,” Davis said. “But I will assure you and your families, while you are here at Grand Valley, you will be attended to.”

Megan Sall, member of Grand Valley’s Board of Trustees, said she was once a student attending convocation for the first time. “I was you,” Sall said, pointing to several new students, “not knowing what the future would hold for me.” Sall stressed the commitment Grand Valley will give to students if they make a commitment to the university.

Sall, of Grand Rapids, earned two degrees from Grand Valley: a bachelor’s in international relations in 2007 and a master’s in public administration in 2009.

Samhita Rhodes, associate professor of engineering, was the first convocation speaker. What she had planned to say, Rhodes said, “was coming out like a bad Hallmark card.” Rather than platitudes for the audience, Rhodes offered investment advice. “Today, you are investing in the most valuable thing you own: the one square foot that’s between your ears,” she said.

The campus community celebrated the formal dedication of the new P. Douglas Kindschi Hall of Science August 28 on the Allendale Campus.

In his opening remarks, President Thomas J. Haas welcomed and recognized the nearly 700 in attendance, including those who collaborated to bring the Kindschi Hall of Science to life.

“As a scientist myself, I could not be more excited about the opportunities this facility provides for our students,” Haas said. “The addition of this facility significantly expands our space for students to conduct research with faculty, which is a highlight of the Grand Valley experience.”

The new science building is named in honor of P. Douglas Kindschi, who has served the university for nearly 40 years in many different capacities, including dean of Science and Mathematics, and is currently the director of Grand Valley’s Sylvia and Richard Kaufman Interfaith Institute.

“My nearly 40 years at Grand Valley have been more fulfilling than anyone could have imagined,” Kindschi said. “To help a university grow from 5,000 to 25,000 students is an opportunity few in academia have enjoyed.”

“Students who engage actively with their faculty and their subjects are most likely to succeed in college and in life. It takes a specialized space to facilitate those important collaborations,” Davis said. “With this new facility, we’ll be able to involve many more students in extracurricular research with their faculty members — strengthening the basis on which they will grow the sciences for our state." 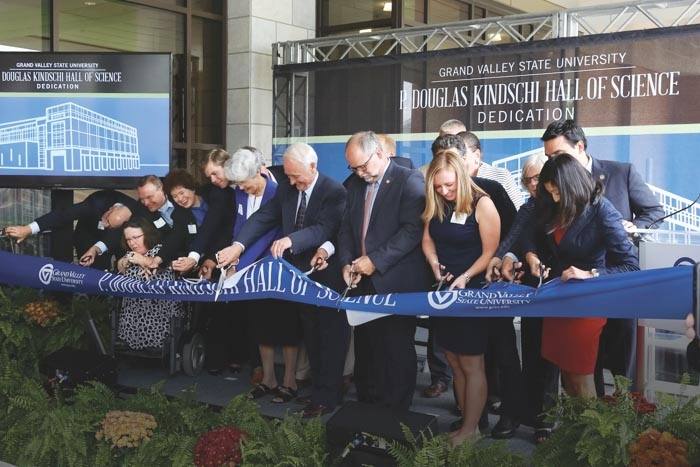 Doug and Barbara Kindschi join lawmakers, trustees and others to cut the ribbon during the dedication ceremony of the P. Douglas Kindschi Hall of Science August 28.
photo by Amanda Pitts

The $55 million, state-of-the-art facility received $30 million from the State of Michigan; the remaining $25 million came from a variety of university resources. The Kindschi Hall of Science is the first state-funded construction project on the Allendale Campus in 20 years.

While the building provides the space, the opportunities for students in undergraduate research in science, technology, engineering and mathematics (STEM) and health disciplines are supported through the CLAS Margin of Excellence for Science Fund, made possible by more than 400 donors.

“The return on investment will come in the form of developing the knowledge and skills needed for our community and the growth of Michigan,” said Victory. “Grand Valley has one of the highest retention rates of its graduates who continue to live, work and invest in our community and our state.”

Page last modified May 21, 2018
Report a problem with this page