It was a dim scene one night in Louis Armstrong Theatre in 2010, except for the spotlights illuminating the cast of students on stage performing "Into the Woods."

Lynnae Meyers, '12, was on stage portraying Cinderella, who, at the time, was receiving some important information from a couple of friendly birds when something went wrong.

"We had fake birds attached to fishing line that our forest nymphs would bring down the aisle for me to talk to," Meyers said. "One night, one of the birds fell off and landed on stage. I picked up the bird, talked to it, and then threw it off the stage as if it was flying away. The audience erupted in laughter, and I still smile thinking about it."

Meyers isn't the only Grand Valley alumni with fond memories of her time performing with the Opera Theatre. Many alumni who have found success in the performing arts around the world credit their achievements to Opera Theatre, which is celebrating its 20th anniversary season.

In 1997, Sherman Van Solkema, chair of the Music Department at that time, saw a need to grow the music program at Grand Valley. Solkema turned to Dale Schriemer, professor of voice, to determine a solution.

"Sherman loved vocalists, and he wanted to improve the level of incoming freshman singers," said Schriemer, Opera Theatre director. "I told him that students needed more time to be on stage."

Schriemer said since its inception, Opera Theatre has focused on exposing students to "masterworks" while giving them opportunities to perform and connect with the industry in order to make appropriate choices about their learning paths.

In its early years, the ensemble would alternate each academic year between performing operas and musical theater pieces. In the past four years, Schriemer said the ensemble has doubled the number of productions by performing both genres each year.

"Most undergraduate programs will be one or the other," Schriemer said. "I think my performers come out more well-rounded with a broader view of what's available to them. They're more engaged in art as a bigger piece, rather than a narrower focus."

To create that broad view, Schriemer prioritizes opportunities for students to perform with community ensembles, like in 2015 when Opera Theatre presented Henry Purcell's "Dido and Aeneas." During this production, students worked with the Grand Rapids Ballet School Junior Company, the Grand Rapids Chamber Choir, and even the Grand Rapids Circus School of Circus and Performing Arts.

"'Dido and Aeneas' hadn't been performed in Grand Rapids for 45 years," Schriemer said. "We brought all of these people together and really created something that was worthy of being enjoyed by anyone." 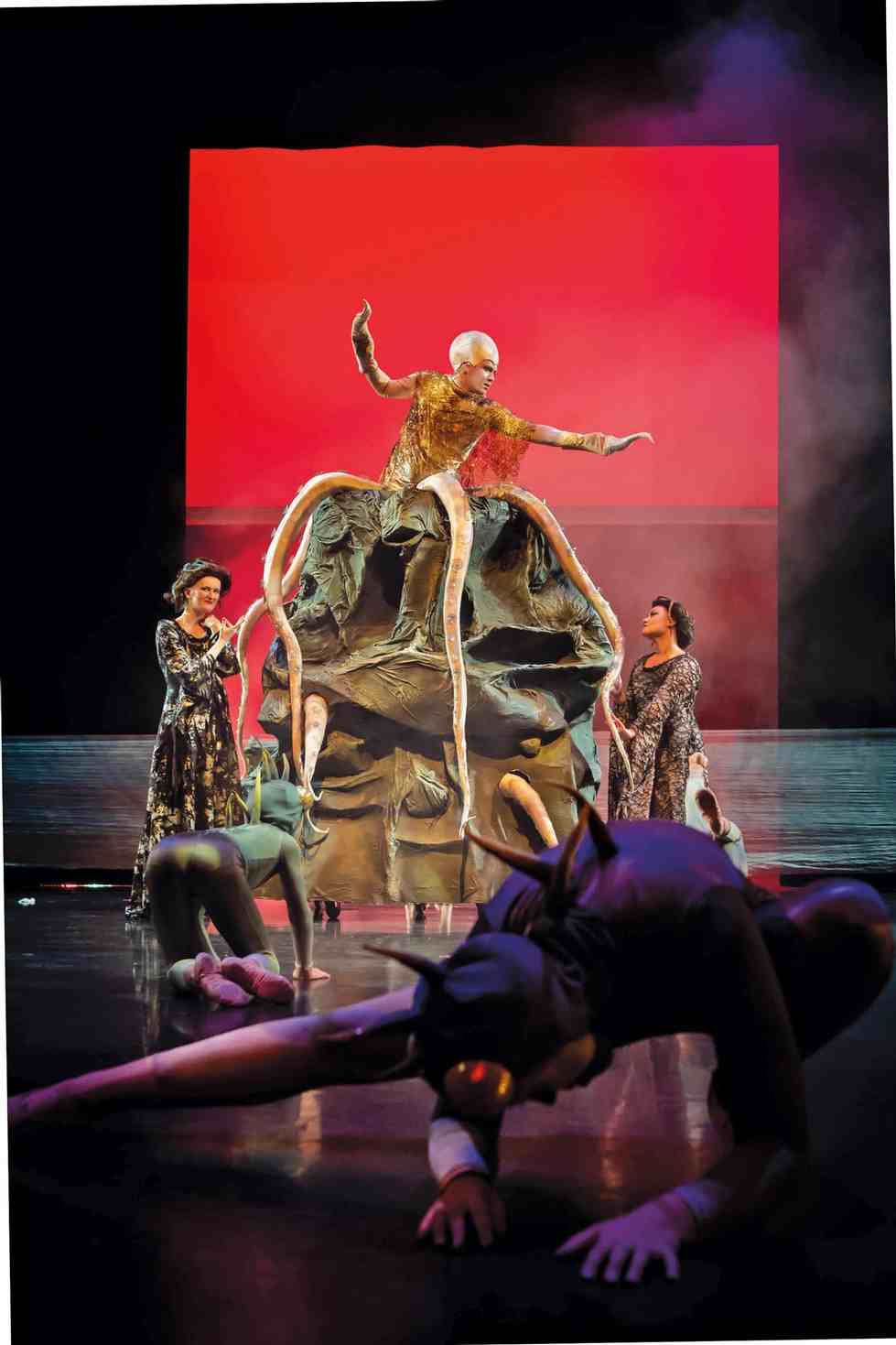 Schriemer said in the past five years, students who are "more theatrically focused" have traveled to New York to take courses and seminars in commercial acting, voice overs and on-screen movie acting, as well as to sing and perform for casting agents.

"You don't just go to New York and get a job," Schriemer said. "Students have to understand the audition process, what the expectations are, what people are looking for in them, and what their 'product' is." 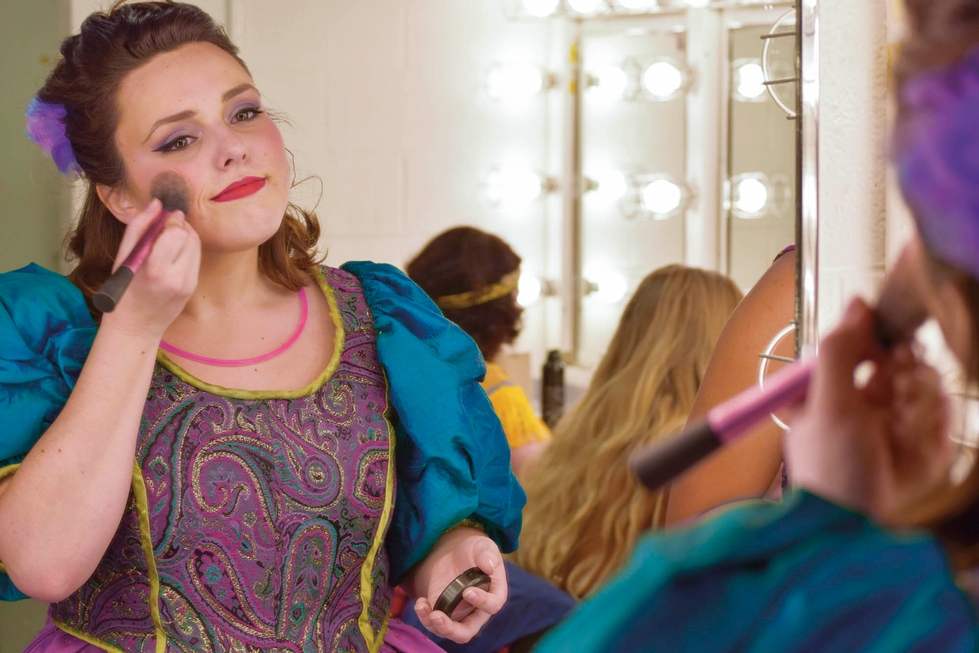 photo by Caitlin Cusack
Communication studies major, Mary Katherine Murnen, applying makeup prior to a performance of 'Godspell' in 2016.

While Meyers didn't move to New York, she did move to another entertainment mecca: Las Vegas. There, she has performed in "Evil Dead: The Musical" and recently wrapped "Bring It On: The Musical."

Meyers believes GVSU Opera Theatre has blossomed these past 20 years because the students and faculty members involved thrive on success and positive experiences.

"Opera Theatre is something magical at Grand Valley," said Meyers, originally from Hudsonville. "Everyone puts their hearts and souls into every single production. The experience showed me what the audition process is like, taught me professionalism in all forms, and it made me grow as an actor and performer."

"Working with those amazing women are some of my most cherished memories from my time in Opera Theatre," said Meyers.

Christine Amon, ’09, who has performed with Nashville Opera, Opera Memphis, Opera Louisiane and Opera Grand Rapids, said Grand Valley provided a safe and supportive environment for students to explore themselves and their characters on and off the stage.

"You're given the permission and the time to explore your character and to create something powerful and memorable that you can be proud of," said Amon, from Grand Rapids. "The most important thing that I have learned in my career thus far is how crucial it is to be a good colleague. Grand Valley taught me how to treat the work and the people with respect."

Ashly Neumann, ’08, is a classical and opera singer for regional opera houses across the country who said she appreciated the amount of time she was on stage honing her craft.

"At many schools, the graduate students get all the roles in music school productions, but in Grand Valley's Opera Theatre, the undergraduate students are so fortunate to be the stars," said Neumann, from Royal Oak. "I grew the most as a singer and actor when I was in a Grand Valley production and had the chance to apply the work from my voice lessons to the 'real world' of performing."

"You're given the permission and the time to explore your character and to create something powerful and memorable that you can be proud of." Christine Amon, ’09

Schriemer said through the past two decades of growing the program, he is the proudest of the success his students have found at Grand Valley and beyond the university.

"I yearn for the success of my students and I want it so badly for them," Schreimer said. "Someone has a chance at life in a particular way because of these opportunities, and I celebrate that. I didn't have the undergraduate experience that they have, and I'm proud of the fact that they have it."


Page last modified March 9, 2017
Report a problem with this page