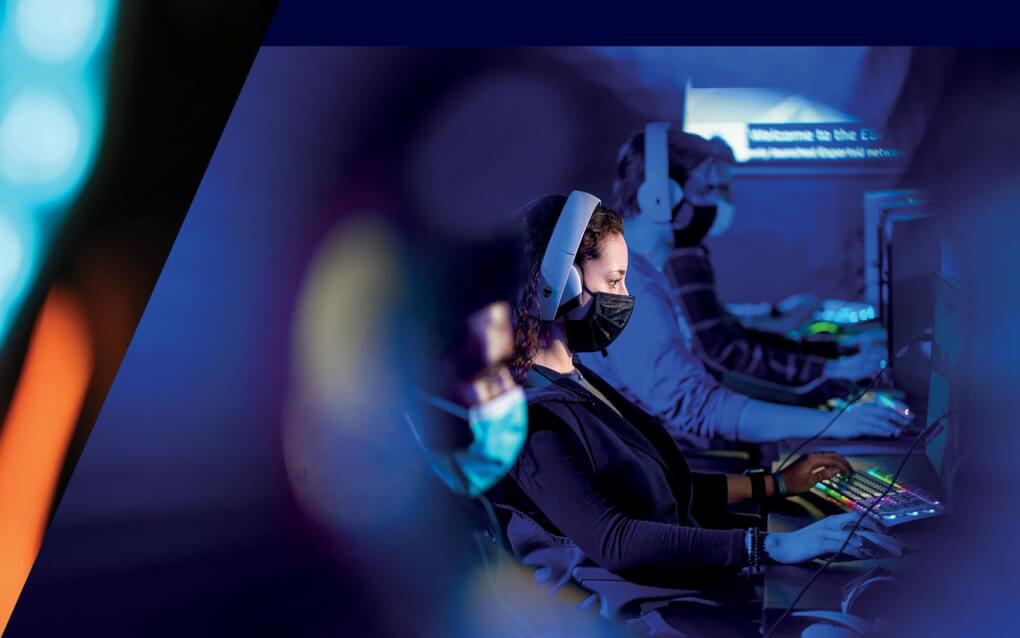 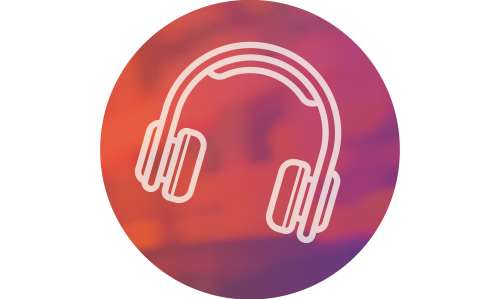 When you hear the word “gamer,” do you imagine a man holed up in a dark basement, sitting in front of a screen for hours while playing a video game?

Or do you imagine students sitting in front of high-end computer stations in a Kirkhof Center room playing a video game against a team from Davenport University, while an enthusiastic crowd watches the broadcast from another room and loudly cheers when Grand Valley scores the first goal?

“When Grand Valley scored that first goal in Rocket League, it was just like the Super Bowl. The whole place just erupted, and I’m thinking to myself, ‘This is why we did this,’” said Mike Przydzial, acting director of Recreation and Wellness.

Przydzial was describing the January 18 grand opening of the Laker Esports Center. A campuswide initiative turned into reality, the center provides gaming space for not only Grand Valley’s competitive esports team but all students, plus faculty and staff members who want to join during the center’s drop-in hours.

Esports teams and centers are growing trends on college campuses, and rightly so, as esports is a $200 billion global industry. Many college students want to continue the competitive gaming they played in high school, and it’s an amenity to show prospective students.

Establishing an esports center on a campus seems a win from all perspectives, but finding its home presents challenges. Some colleges house esports in athletics and only varsity athletes can participate, while others use the umbrella of student services and open the center to all students. Grand Valley has found a unique niche. The Laker Esports Center operates, for now, under Recreation and Wellness. It is open to everyone on campus and has a competitive team. It also spurred interest from academic departments, as faculty are exploring how the university could someday offer esports management and gaming courses. 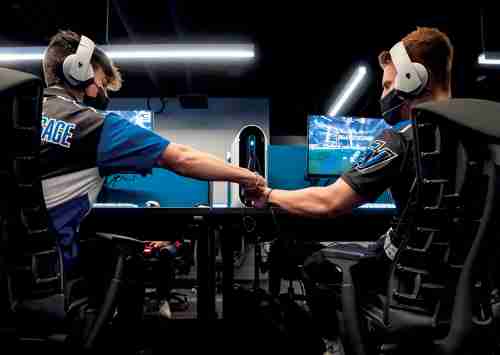 Jesse DeWeerd and Spencer Deitrick celebrate with a fist bump after scoring a goal in a Rocket League game against Davenport University during the Laker Esports Center opening on January 18.

Marshal Brummel, a 2019 Grand Valley graduate, was not a gamer in high school. In fact, he lived in a house without cable or internet until he turned 13.

“I played a ton of youth soccer and was one step below Olympic-level development,” said Brummel, who earned a bachelor’s degree in computer science. “My friends in high school would show me the games they were playing and I loved how competitive it was.”

He was soon hooked on competitive gaming and brought that enthusiasm to campus. Brummel tried to establish an esports club in 2016 but ran into some initial confusion. “I was told there were already video game clubs on campus. It’s really not the same,” he said.

Brummel sought strength in numbers and connected with the leaders of League of Legends, Super Smash Bros and other game-specific clubs. He soon had support to market the esports club at Campus Life Night, the early fall recruiting event for student organizations. More than 200 students signed up.

The popularity presented challenges. “We would have 80-100 people come to meetings. We had no computers and it was not easy for people to bring their PCs to campus,” he said. The Office of Student Life was hit with odd requests when the club wanted to meet or host an event. “They never had requests like ours. I would submit a request for, say, tons of power strips and four TVs,” Brummel said.

Brummel asked Ira Woodring, assistant professor of computing, to be the club’s faculty advisor; Woodring continues to serve in that capacity.

“The club grew really quickly,” Woodring said. “It’s really one of the very few student clubs that accepts everyone. You might like football but not have the skills to play football. With esports, there’s an entry point for everyone.”

With Brummel as president, the club found its groove and hosted several tournaments. Brummel said he knew it could be bigger and better with the right space and funding. He began to request meetings with campus leaders, sharing a proposal he created for a university-funded esports venue. 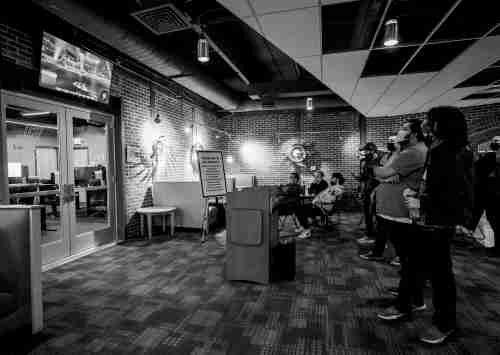 Spectators watch Grand Valley and Davenport compete in a Rocket League game on screens outside the Laker Esports Center.

Brummel met several times with Kate Harmon, now acting associate dean of students, when she served as director of recreation and wellness. Harmon was hearing similar conversations about creating space for esports when she attended state and national conferences for collegiate recreation.

“Grand Valley held a tournament in February 2020 at Celebration Cinema and I went to watch the teams compete,” Harmon said. “It clicked with me then what the team was trying to accomplish.

“The players were a lot like a basketball team. They communicated with each other to accomplish a task. I thought, ‘I get it now and there is a place for this at Grand Valley.’”

President Philomena V. Mantella later approved a proposal to find space on campus for an esports center. Harmon said: “President Mantella knows that engaged students are often successful academically. She has seen the success at other universities.”

Eric Kunnen, senior director of IT Innovation and Research, enjoys new projects and said he appreciated being pulled into the esports conversation last year.

“Having a center really builds community for students,” Kunnen said.

“It gets them out of their rooms where they play video games by themselves and into this beautiful space, and provides access for those who might not have equipment like this.”

The center’s state-of-the-art Alienware Aurora gaming PCs were configurated in collaboration with Dell, which was the selected computing vendor. The stations and chairs are from Herman Miller, with the furniture manufacturer donating half of the stations and Recreation and Wellness funding the rest. The IT Division paid for computer equipment.

Next on the list was finding someone to lead the center’s operations.

“This is such a great space for students,” Bilski said. “They do not need to worry about their internet connection, and we have all the games already downloaded. This makes gaming more accessible.”

And popular. Bilski said during the month following the January 18 grand opening, 220 unique visitors spent time at the center. There are now 550 members in the esports club that Brummel established in 2017.

Bilski gave Brummel a tour of the center. “I never doubted this would happen. The students in the club who came after me were successful in making this happen,” Brummel said. “Mission complete.”

He now works as a web developer for CU Answers. It’s Brummel’s third job since graduating. At each interview, he talked about the esports club and the leadership experience he gained as its president and founder. “Not a lot of people can say they were president of a club with more than 350 members,” he said.

“People don’t realize how many areas it touches. There are dietitians for professional esport players, physical therapists, team coaches, researchers in the field,” he said.

Faculty members Christina Beaudoin and Sally Ross, associate professor of sport management, are leading an interdisciplinary committee to explore how to add esports to the university’s curriculum.

Beaudoin, professor of exercise science, said they have looked at models that range from a few esport classes to a certificate program to a major. “We’ve been working on how to make esports at Grand Valley unique. It’s such a growing area, we want to do it well,” she said.

The committee, Beaudoin said, works with the understanding that esports is an industry with a lack of diversity among gamers, in addition to having other social justice and equity issues (see sidebar).

Kunnen said this will be Grand Valley’s esports niche, infusing it into the curriculum while building community among students. Przydzial agreed and said others are taking note of the Laker Esports Center.

“Coach Bilski took a call from the GLIAC recently,” Przydzial said. “They want to host a virtual esports tournament in the spring and an in-person one in the fall. It’s funny to think that Grand Valley is talked about as being trailblazers in this field when two, three years ago, we felt we were behind the eight ball.”

The gaming industry, now a global entertainment powerhouse, is far behind when it comes to diversity and equity, said Alisha Karabinus, a Grand Valley expert who is studying ways to improve inclusion in the profession.

Demographic data from an industry survey has consistently shown problems with a lack of diversity, Karabinus said. “The numbers do not match numbers worldwide for population,” she said.

The response from those leading the industry mirror the same kinds of issues raised in the technology world, she said, such as they’re not getting applications from different backgrounds or there are not enough qualified applicants.

“We’re just losing people who are interested in investing in games, who grow up playing a lot of games,” said Karabinus, an assistant professor who is dually appointed to the writing and digital studies programs.

One space that may hold some opportunities for increasing diversity, particularly at the design and development levels, is in the hobbyist gaming community, she said.

Karabinus has conducted a pilot study to gauge whether those evaluating applicants think the skills and capabilities of hobbyist gamers translate to a professional setting. A significant number agreed they could.

The results from the pilot study were intriguing enough to expand the study, Karabinus said.

Why has Karabinus targeted the hobbyist industry as a way to improve inclusion? From a skills standpoint, she said, those working on independent games or creating their own spaces for games are using a structure similar to that in a professional setting: standard work flows, documentation, testing.

Because they are creating these games for fun, hobbyists often don't see that they have skills that are applicable to professional work, she said. She is also hopeful that the research can help redefine qualifications for a job, especially when a customary professional qualification is an internship, which isn't always within reach for job hopefuls.

The demographics of the hobbyist community also hold potential promise for increasing diversity in the gaming industry, Karabinus said.

Another reason too many feel unwelcome is what they see — or don't see — on the screen, Karabinus said.

She cited a data point from separate research showing that in the entirety of the gaming industry, there have been approximately 30 playable Black women characters. And often, they are side characters, she said.

“There may be people going through their entire lives trying to play games and never having the opportunity to play a character that looks remotely like them,” Karabinus said. 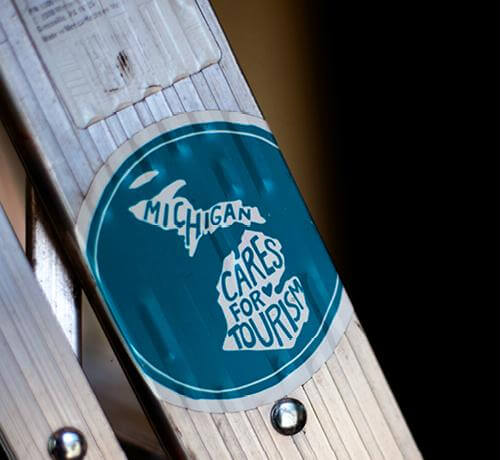 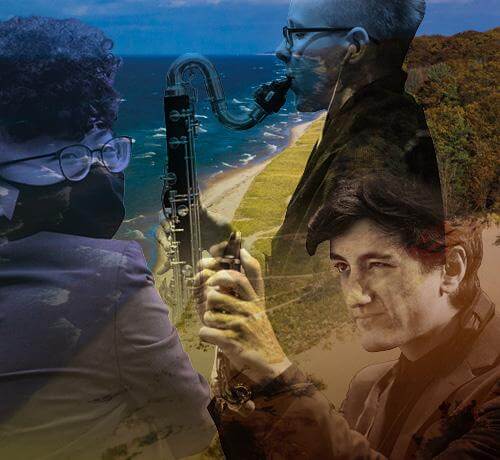 Bill Ryan, an avid outdoor enthusiast, got to thinking several years ago: Is there a way to combine two of his passions -- nature and the GVSU New Music Ensemble that he leads? 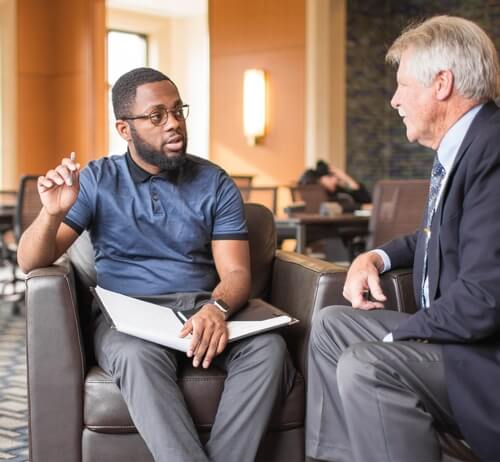