Our research is currently focused on three sinkhole communities along a depth and light gradient in the TBNMS, the nearshore El Cajon sinkholes/springs (<1 to 23 m deep), the Middle Island sinkhole (offshore 2 miles and 23 m deep), and the Isolated Sinkhole (offshore 9 miles and 93 m deep). The principal goals of this research are to: (1) Describe the abundance, diversity and activities of the microbial community in the submerged sinkhole ecosystems located along the depth gradient, (2) Determine how the changing environmental gradients in submerged sinkhole ecosystems impact microbial composition and processes, and (3) Determine the link between microbial production at sinkholes and the food web of surrounding Lake Huron.

Some preliminary findings are: 1. Sinkholes are characterized by steep environmental gradients and colorful microbial benthic mats where photosynthesis and chemosynthesis fuel the food web. 2. Sinkhole benthic food web (but not the pelagic food web) is linked to microbial mats that derive their carbon from the groundwater, and 3. Sinkhole sediments are sites of substantial net organic carbon burial (i.e., sinkholes are carbon sinks or traps).

Further exploration of these relatively accessible underwater ecosystems presents new and exciting opportunities for microbial and geochemical studies that have the potential for discovery of novel organisms, biochemical compounds and physiological processes. Improved knowledge of structure and function of the submerged sinkholes may ultimately lead to the protection and preservation of these unique habitats that may be susceptible to anthropogenic disturbances such as land use changes occurring over the recharge areas on land. 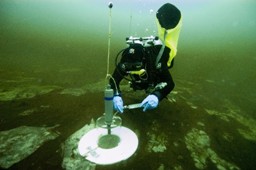 Purple and white cyanobacterial mats grow on the edge of a sinkhole wall, flowing in the ancient groundwater 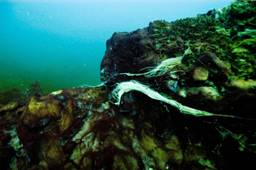 Click below for an overview of the Lake Huron sinkholes we have been studying.

Isolated Sinkhole This color image of a submerged sinkhole was acquired by the Institute for Exploration's ROV "Little Hercules" at a depth of 92m during the 2002 exploration of the Isolated Sinkhole, Thunder Bay Marine Sanctuary, Lake Huron. This ecosystem is driven by groundwater, relatively rich in sulfates, chlorides, and nutrients, venting from the 40m x 55m submerged sinkhole. The image shows wood and rock debris on the lake floor overlain by a 1-2 m thick nepheloid-like cloudy plume layer. This plume layer is a microorganism-dominated biogeochemical hot spot rich in dissolved and particulate organic carbon, and high in heterotrophic and chemosynthetic microbial activity.

Sinkhole Video to watch a Windows Media Video of a remote operated vehicle (ROV) moving through the cloudy layer above the microbial mats of the 93m deep Isolated Sinkhole. Notes on this Video: This brief (~ 1 min) video clip acquired from the University of Michigan's remotely operated vehicle for education and research (M-ROVER) at a depth of 292-294 ft (~90 m) shows features of the lake floor and the overlying nepheloid-like plume layer in the Isolated Sinkhole, Thunder Bay National Marine Sanctuary, Lake Huron, during September 2003.

T and P refer to the tilt and pan of the video camera. H refers to the magnetic heading. The bar graph on the left indicates depth in feet below surface recorded by a pressure transducer. The bar graph on the right indicates altitude in feet above the lake bottom recorded by a down-looking sonar (At close ranges to the bottom, the altimeter reading will be incorrect due to multiple reflections). Compass rose is located in the low-mid center. The x2 is a temperature reading in volts (There is a gain associated with this in order to convert to degrees C or F).

Back to Research Page


Page last modified May 13, 2020
Report a problem with this page