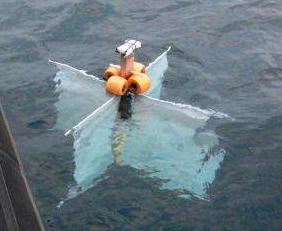 GVSU's drifter is a modified Eddie Drifter which has a low profile in the water and has "sails" that extent 1m below the water surface to "catch" the water currents. This design allows the drifter to move only with surface currents in the lake and not the wind. The drifter is tracked with a GPS transmitter mounted at its top. Position data during its drift are used to develop imagery of how surface currents are influenced by other environmental factors such as wind, water temperature, and water mass. One question that can be asked is how does the movement of the drifter relate to modeled surface currents. NOAA GLERL has a nice website with information on past and future surface currents which can be seen at https://www.glerl.noaa.gov/res/glcfs/glcfs.php?lake=m&ext=sfcur&type=N&hr=-1.

For more information on our drifter program and drifter data, contact Scott Kendall at [email protected].

On November 8th, 2012, GVSU launched the drifter in mid-central Lake Michigan on a trip out to GVSU MAREC's wind buoy. This buoy is anchored at this part of the lake and measure winds using a sophisticated laser sensor. We will be able to compare wind direction from this buoy to the track of the drifter. A location fix was obtained every 2 hours and its path can be viewed on the map below. On November 26th, the drifter washed up on the beach near Little Sable Point Lighthouse

On July 30th, 2012, GVSU launched the drifter in southern Lake Michigan off the GVSU's R/V W.G. Jackson. A location fix was obtained every hour. The map below shows the drifter track during this deployment. After 30 days of drifting, on August 28th, the drifter reached the end of its voyage. On that evening, a fisherman spotted it offshore from Benton Harbor, MI and removed it from the lake. The fisherman called us and we hope to collect the drifter for another deployment. To view an animation of this drifter track in Google Earth, click this file: Drifter Track 2012.kmz

Map showing all current and past drifter tracks

The drifter project is supported by the Marine Advanced Technology Education (MATE) Center at the Monterey Peninsula College in Monterrey, CA ( www.marinetech.org). MATE provided the drifter, training, and satellite costs. One of the MATE Center goals is "preparing students for jobs in the ocean workforce where technical knowledge and skills such as gathering, analyzing, visualizing, and sharing real-time ocean data are essential." For more information on the MATE center, contact Deidre Sullivan at [email protected].