Anchor Truth to Power: The Battle for Earth

“A house divided against itself cannot stand”
–Abraham Lincoln (1858).

We’ve all been there, behind on a school or work project, stuck contemplating how we got ourselves into this position. If you read the first example sentence, there would not be a shadow of doubt – it was procrastination, and we know it. If you read the second sentence, you may have just enough doubt in your mind as to why your project isn’t completed to keep you from attacking what you know is the true reason your project isn’t completed – procrastination. Small changes in semantics may seem innocuous, but the semantics and deception, not bullets and bombs, are just some of the weapons used by those with trillions of dollars invested in the fossil-fuel industry are waging the New Climate War – even as the global awareness of extreme climate change and its danger to human civilization are mounting.

As the title of this work would suggest, today’s climate war has shifted in form and urgency since the first debates surrounding climate change began in the mid-19th century. Gone are the days of pure climate denialism. The recent United Nations IPCC (Intergovernmental Panel on Climate Change) AR6 (Assessment Report 6) has firmly stated, “It is unequivocal that human influence has warmed the atmosphere, ocean and land” (IPCC 2021).  In the longer-term, the carbon dioxide that is already in our atmosphere will continue to warm the planet for decades while ongoing sea level rise will go on for hundreds of years – suggesting that globally coordinated remedial action by human agency is an urgent necessity to ward off catastrophic damage to our civilization and other essential life-support systems (IPCC 2021). In the meantime, the short-term effects, from massive fires in Turkey and California to record-setting hurricane seasons and inundated coastal cities have become undeniable – except to a select few with vested interests in maintaining our current course. Author and atmospheric scientist Michael E. Mann (Figure 1) builds The New Climate War: The Fight to Take Back Our Planet like a military briefing from a top general: Who is the enemy? What are their tactics? Where are the battlefields? Why should we fight? How do we fight? Mann calls on his extensive behind-the-scenes knowledge and battlefront experience to make these questions explicitly clear – sparing no enemies in the process. 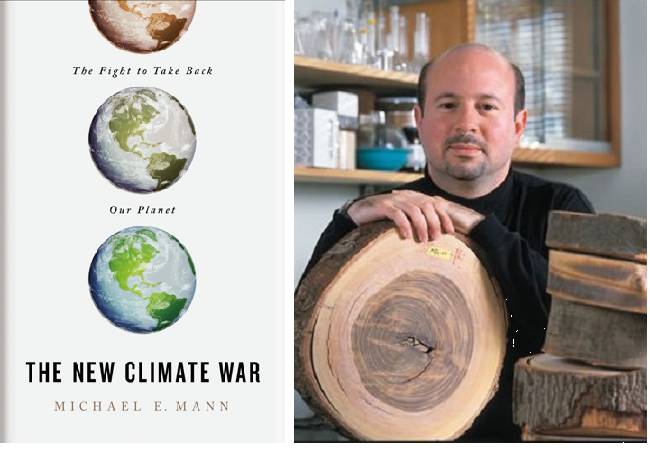 Figure 1. The Book Under Review: “The New Climate War: The fight to take back our planet” (Public Affairs/Hachette Book Group, 2021, p. 351, ~$28) by Michael Mann (left image). Dr. Mann is a distinguished professor of atmospheric science at Pennsylvania State University and a member of the US National Academy of Sciences (right image).

Mann describes a brief history of the use of denialism, deflection, and doubt as corporate tools to maintain a certain level of influence or power. Historical examples of deflection are highlighted in the tobacco industry, the NRA, and large beverage producers, and illustrate the often subtle and sinister ways that a problem can be deliberately deflected away from its root cause. The same insidious tactics are now used by the likes of fossil fuel producers such as BP, Shell, Exxon Mobile, and their associates to deflect the ills and responsibility of fossil fuel burning onto the individual and to crush any chance of meaningful action. Where once pure denialism was the name of the game, new tricks have been tactfully waged on the populous in a sort of climate circle whereby even well-intentioned citizens have become paralyzed by the situation at hand, now so unconvinced of their ability to take agency that the same end result of pure denialism - inaction - is reached (Figure 2). They want to push people to think that the only solutions come from individual action while simultaneously making people realize that, collectively, billions would be required to make any meaningful change and that doing anything is pointless. 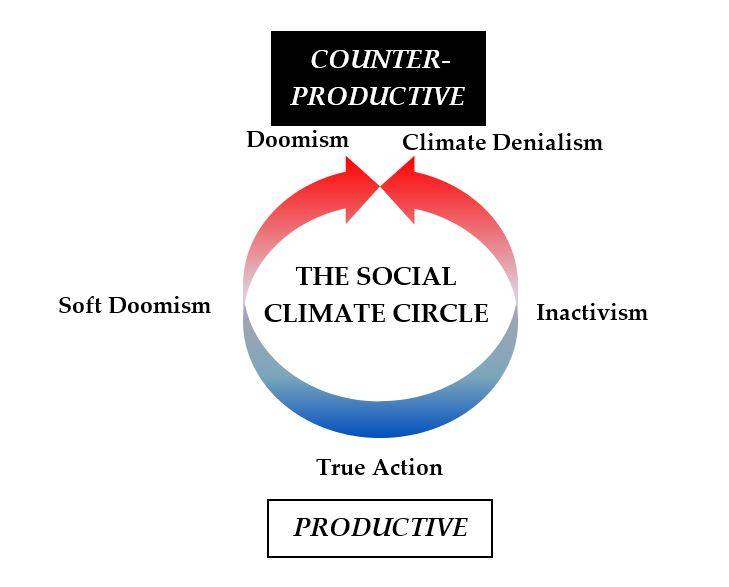 Figure 2. Conceptual diagram of how in terms of outcome, feelings about climate change are less of a linear spectrum and are more of a  full circle whereby too much concern results in the same inaction that climate change denialism does.

These new weapons in the New Climate War have been deployed largely in an arena still in its infancy, social media, while holding ground in the old battlegrounds on Capitol Hill. Mann leans on countless first-hand experiences from his Twitter to illustrate how the coupling between a new world of online trolls and bots, anonymity, and a lack of face-to-face engagement have festered into a sea of misinformation, virtue signaling, and “doomism” fueled by foreign influence. The book highlights the way in which otherwise good people can be made to subtly bring each other down by engaging in virtue signaling and ego-boosting, using “hot-button” issues of the day like veganism to divert attention from the primary parties and activities responsible for the current climate crisis. Although personal life choices have a role in the climate crisis, putting decoy issues at the forefront not only distracts – it also divides. Mann goes on to show how these arguments create rifts among people who should be working towards a common goal but are blinded by their slight differences. As a result, necessary systematic change is often made more difficult and fails to be passed or implemented, keeping inaction crowned as king. More traditionally, the role of industry in promoting “non-solution solutions” is identified, creating progressive-appearing trojan horse “solutions” that continue to veil the fossil fuel soldiers, further delaying any action from the dire situation at hand.

While the severity of the situation is not overlooked, Mann continuously reaffirms that a sense of agency is key and that the next generations are central to creating that agency. Mann clearly views the action taken by Greta Thunberg as a particularly noble one, one that needs to be emulated by her peers and heeded by adults in power. Today’s children, he argues, “speak with a moral clarity that is undeniable to all but the most jaded and cynical.” (Mann, 259). This is the moral clarity needed to help teach the misinformed and uplift the hopeless (Figure 3). 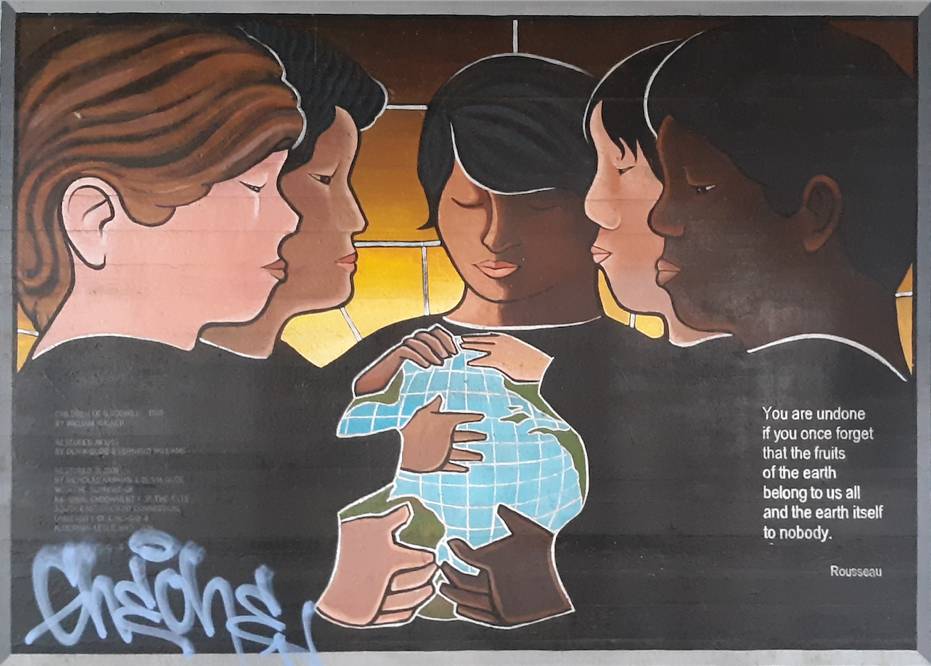 Figure 3. Children of Goodwill: Wall mural on the 57th Street underpass in Chicago’s Southside by William Walker 1977 (left). The quote on the lower right says, “You are undone if you once forget that the fruits of the earth belong to us all and the earth itself to nobody”, and is by Jean-Jacques Rousseau (1754). Lower left corner of the painting on the left with credits, is enlarged in the right panel. 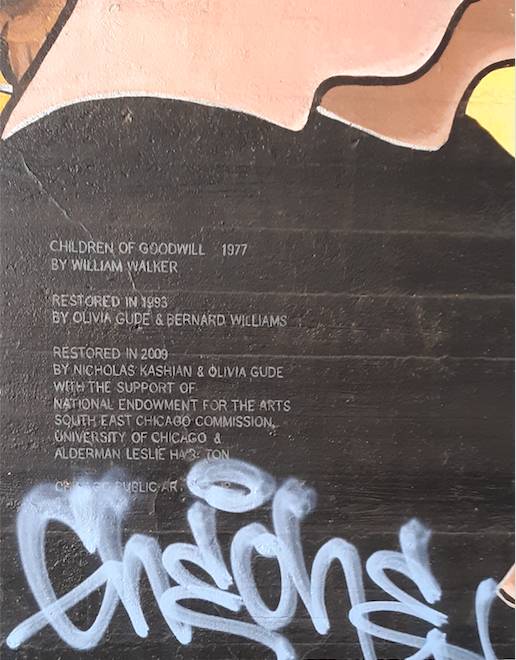 In Mann’s world, stark lines are drawn with little room for nuance: you are either helping unite the troops against climate change and those responsible or you are not. No punches are pulled, and names are quick to be dropped. This work is likely to unite and light a fire under anyone on Mann’s side of the New Climate War, though it seems unlikely to change any “on-the-fence” minds. Perhaps it was intended that way – perhaps it is the duty of the reader to use their new knowledge to educate their on-the-fence peers. The important issue left unanswered, likely because there is no single answer, is about changing minds of those on the fence or in outright denial of climate change. Do you need to change minds? Is it worth trying to change minds? Can you change minds? If so, who’s? It seems easy to those who already accept that climate change is real and anthropogenic; however, many are skeptical of the evidence or blindly follow misinformation to the opposite conclusion.

This brings up a conundrum. The situation is dire, and we need all hands on deck if we are to solve it, but what do you do about deniers and skeptics? Mann encourages people (you) to call out BS when you see it on Twitter or hear it with family and friends. Frustratingly, deniers and skeptics don’t care about being called out, their mind is made up already, they’re “right”, and it’s not likely to change their mind on the topic no matter the evidence put forth. Berating them with evidence in a public forum is not likely to change anything either. The real change is most likely to come from 1 on 1 conversations, the key here being conversations, not lectures. Persuading someone of your point doesn’t come from telling them they are wrong in a smug quip. These are the sorts of questions, ideas, and possible solutions that are not delved into in this book nor many other books on climate change. This highlights a larger issue of a disconnect in society, particularly in the USA, between scientists and non-scientists.

At times, though illustrative, the numerous examples from Mann’s life can come across as slightly braggadocious, occasionally verging on a being more of a chronicle of his Twitter victories than an exemplification of the issues he’s seeking to illuminate. A convincing argument is made for definitive action, but he (likely intentionally) leaves little room for nuance on the specific actions needing to be taken, when the reality is that true solutions may be more grey than black and white. Although he does acknowledge that within reasonable solutions, some room for discussion does exist, Mann does not dive deeper than a surface glance. Mann’s personal triumphs may be slightly distracting, and the discussion on true solutions may leave one wanting for more, but neither is hardly enough to noticeably detract from the book’s main themes.

The New Climate War: The Fight to Take Back Our Planet places the battleground of the climate war in a new clarity. The who, what, where, when, why, and how are definitively discussed at a time when definitive action is desperately needed. We are in deep. At the time of this writing, July has just been announced as the hottest month globally in recorded history (NOAA, 2021). The IPCC AR6 has made the urgency of the situation abundantly clear with their definitive vocabulary and detailed status update, but Mann uses his “cautious optimism” to provide a crucial sense of agency in the battle plan moving forward (IPCC, 2021). The New Climate War is laden with references to “tipping points”, whether that be for the climate, ecosystems, social/political perceptions, or financial systems. Much was uncertain at the time of this book was written: COVID-19 was still relatively new, fires were ravaging the American west and Australia, and an election with long-lasting global implications loomed in the United States. Since then, much remains uncertain and unchanged – fires still rage in California and COVID-19 is gripping the world with the Delta variant. However, it is impossible to read this book and not feel that we have moved closer to the edge of a tipping point in the new fight against those delaying climate action. Will humankind rise to the existential challenge of our times now even as the climate is changing over to an irreversible state? The fate of the Earth’s climate still hangs in the balance, but The New Climate War makes it difficult to not be at least cautiously optimistic.

“To turn away from the greatest threat humankind has ever faced has required a staggering dedication to distraction and a lack of empathy for the suffering of others….”
– John Freeman (2020).


Page last modified October 1, 2021
Report a problem with this page