Dr. Richard R. Rediske is a professor of water resources at the Annis Water Resources Institute at Grand Valley State University and conducts research on the fate and transport of toxic chemicals in the environment. Previously, he was the Vice President of Environmental Services for a large consulting engineering firm (Earth Tech) involved with the remediation of hazardous waste sites. Dr. Rediske has a PhD in Environmental Health Sciences (Toxicology) and a MS in Water Resources Science from the University of Michigan.

Dr. Rediske has been involved with Kent County PFAS issues since 2014 when he became concerned about levels of PFOS and PFOA that found in fish from the Rogue River near the Wolverine World Wide Tannery. He also was advising the Concerned Citizens for Responsible Remediation (CCRR) on environmental concerns related to the demolition of the Tannery. Using information the CCRR obtained from searching public records, patent searches, and trade publications, Dr. Rediske became convinced that the Tannery used PFAS chemicals as part of waterproofing their flagship shoe, Hush Puppies, beginning in the late 1950s. The phase out of Scotchgard was announced in 1999 and the product was discontinued in 2002. He alerted the legal counsel for the Tannery and their consultant of the historic use of PFAS chemicals at the site and that the facility was the likely source of the contaminants in the Rogue River fish. In January 2017, Dr. Rediske and the CCRR met with MDEQ to discuss concerns about PFAS usage at the Rockford Tannery and provided a technical memorandum summarizing the information used to support the concerns. Prior to this time, PFAS was not considered to be a chemical of concern at the Tannery. Dr. Rediske has given numerous interviews to news media outlets, including the New York Times. He also is a frequent speaker at public meetings concerning PFAS in Kent County and was part of a webinar conducted by the University of Michigan School of Public Health’s Michigan Lifestage Environmental Exposures and Disease Center. On Nov 13th, 2018, Dr. Rediske provided testimony in front of the U.S. Senate Field Summit on PFAS Contamination in Michigan, organized by Senator Gary Peters. A transcript of his testimony can be found here.

Currently, Dr. Rediske’s lab at GVSU’s Annis Water Resources Institute is monitoring the presence of PFAS in soils and watersheds around Muskegon County, Michigan. Regular environmental sampling and thorough environmental research is planned, specifically in watersheds impacted by contemporary and legacy contamination sources. The detection of PFAS in several sites around Muskegon has been noted, but further research is needed. Additionally, Dr. Rediske and Dr. Alan Steinman are collaboratively working on research aiming to study PFAS transport and accumulation on plastics found in water bodies. Through dedication and hard work, Dr. Rediske continues to aid in the study of PFAS in Michigan using scientific research, expert testimony and community involvement. His recent testimony, interviews and activities can be found below. 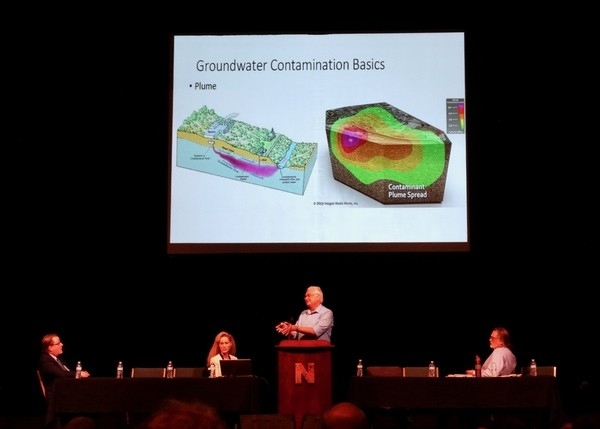 
Page last modified June 15, 2021
Report a problem with this page