The MES minor capitalizes on increasing interest in the non-Western world from a variety of disciplines. 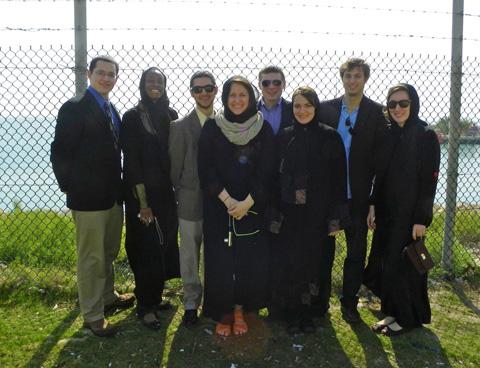 Lizzie Heyboer, center, is pictured with other students who traveled to Saudi Arabia.

Lizzie Heyboer has a cooler story than most students when asked what she did over winter break.

Heyboer spent two weeks in Saudi Arabia after receiving a fellowship from the National Council on U.S.-Arab Relations. She joined seven other U.S. college students for a whirlwind, fully paid trip to Saudi Arabia that included visits with government officials and university students.

Heyboer, a student in the Frederik Meijer Honors College, is an international relations major who is minoring in Middle East Studies.

During her December 2011 trip, Heyboer said the group traveled to three diverse cities: Riyadh, Jeddah and Dammam. We were able to see the areas where people were more conservative and areas where women don't always wear the head scarf, she said. The contrast within the different areas of the country was surprising.

I was impressed with Lizzies intellectual curiosity and her passion for learning about the Middle East, Fitzpatrick said.

One of the criteria for the fellowship was that students have experience participating in Model Arab League, a simulation in which students role-play as members of the 23 Arab states. Grand Valley will serve as a regional host to Model Arab League February 23-25.

Heyboer did not take an Arabic class prior to her trip, but she is enrolled in the introductory course now. I feel like I was in a cultural immersion program and am now able to pick up some words and phrases during class, she said.

Heyboer, who is also an officer for the student organization Arab Culture Club, will serve the remainder of her fellowship year as an ambassador for the NCUSAR and give class presentations about her trip.


Page last modified March 6, 2018
Report a problem with this page