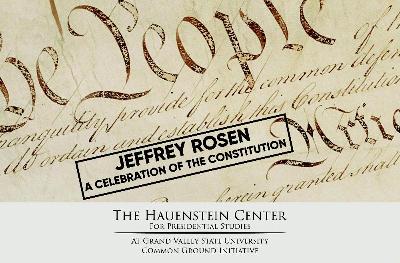 Binding the American people together for nearly 250 years, the Constitution of the United States and its 27 amendments have remained at the heart of American democracy. Today, however, in times of increasingly vitriolic political partisanship, even the Constitution is not immune to scrutiny. An age-old question is as germane today as ever: is the Constitution to be read based on the founders’ intent, or as a living-document that has changed as American society has changed? And in the process of answering that question, another one presses: what is the role of the judicial branch in this effort?

In honor of Constitution Day 2019, the Hauenstein Center and partners the Gerald R. Ford Foundation and Gerald R. Ford Presidential Museum & Library are proud to welcome Jeffrey Rosen, a scholar whom the Los Angeles Times calls “the nation’s most widely read and influential legal commentator.” Rosen, serves as President and CEO of the National Constitution Center. In light of the looming 2020 election, he will share his insights into the future of the Constitution and the Supreme Court in our increasingly challenged democracy.

Jeff has written seven books, including the authoritative biography of Louis D. Brandeis, and a biography of William Howard Taft published as part of the American Presidents Series. His seventh book, Conversations with RBG, is slated for release in the first week of November.

In 2013, Jeff took the helm as President and CEO of the National Constitution Center, located steps away from Independence Hall in Philadelphia, Pennsylvania. Acting as an interactive museum, national town hall, and resource for nonpartisan civic education, the National Constitution Center reaches millions of American citizens every year. Jeff has cultivated the center’s acclaimed Interactive Constitution, written penetrating articles, and launched the We the People podcast.

Jeff is also a professor at The George Washington University Law School as well as contributing editor of The Atlantic . Jeff’s expertise makes him a highly regarded legal journalist, often appearing in The New Yorker, New York Times Magazine, New Republic, and on National Public Radio.

A graduate of Harvard College, Jeff went on to be a Marshall Scholar at Oxford University. He received his law degree from Yale Law School.

In his evening presentation, Jeff will give us his updated insights on the Future of the Constitution and the Supreme Court. His lecture is at 7 PM in Loosemore Auditorium on Grand Valley’s Pew campus.


Page last modified September 23, 2019
Report a problem with this page