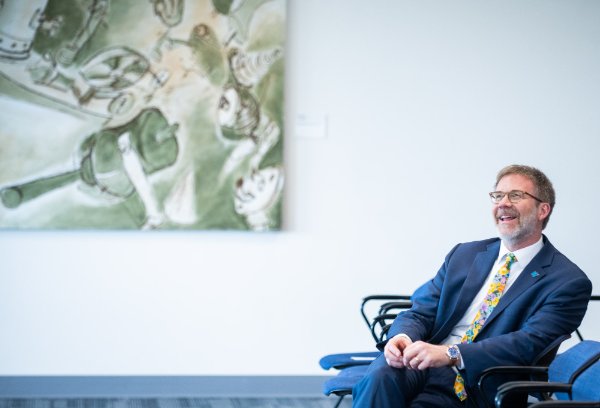 Mark Schaub was named dean of the Brooks College of Interdisciplinary Studies. He had served as acting and interim dean.
Image Credit: Kendra Stanley-Mills

Mark Schaub was named dean of the Brooks College of Interdisciplinary Studies after serving as acting and interim dean since February 2019.

Maria Cimitile, provost and executive vice president for Academic and Student Affairs, made the announcement November 3 and applauded Schaub's "cross-university work," saying it was essential for the interdisciplinary mission of Brooks College.

"Dr. Schaub’s work as the chief international officer has allowed him to interact with faculty and staff from across the university," Cimitile said. "His personal and professional intercultural understanding is ideally suited for a college that has a deep commitment to intercultural growth."

Schaub joined Grand Valley's faculty in 1999, serving in the English and Writing departments. He was chief international officer from 2011-2019, leading the Padnos International Center staff in providing global experiences for the campus community.

Schaub said he hopes to continue the positive direction and growth of Brooks College set by his predecessors: Wendy Wenner and Anne Hiskes, who retired last year. He also mentioned the important role Brooks College plays in LEADS, the accelerated bachelor's degree program for adult learners.

"Brooks will be central in the creation and realization of the next chapter of Grand Valley," he said. "Already, the college leads the institution in the percentage of non-traditional students. With the new LEADS program, which has many courses here in Brooks, we are poised to help new populations of working adults realize their learning goals."

Schaub earned a doctoral degree in English from Purdue University and served as director of the writing program at the American University in Cairo before working at Grand Valley.