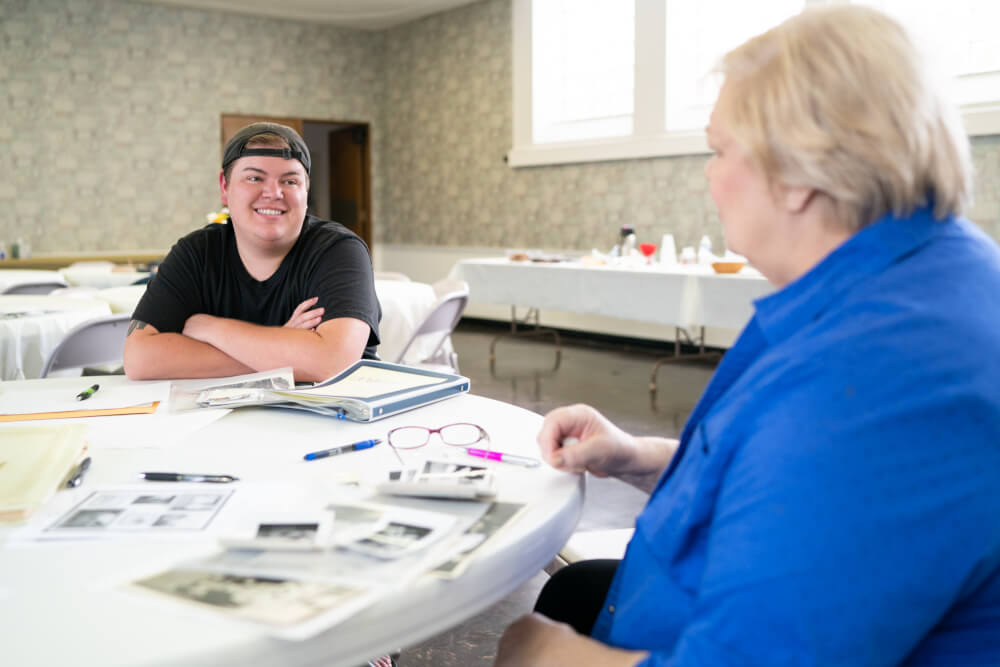 Joel Hill, a senior majoring in integrative studies, talks with Fran Boyden, a member of B'nai Israel, at the synagogue. Hill participated in an oral history collection with synagogue members that will be an exhibition next year in Muskegon.
Image Credit: Amanda Pitts 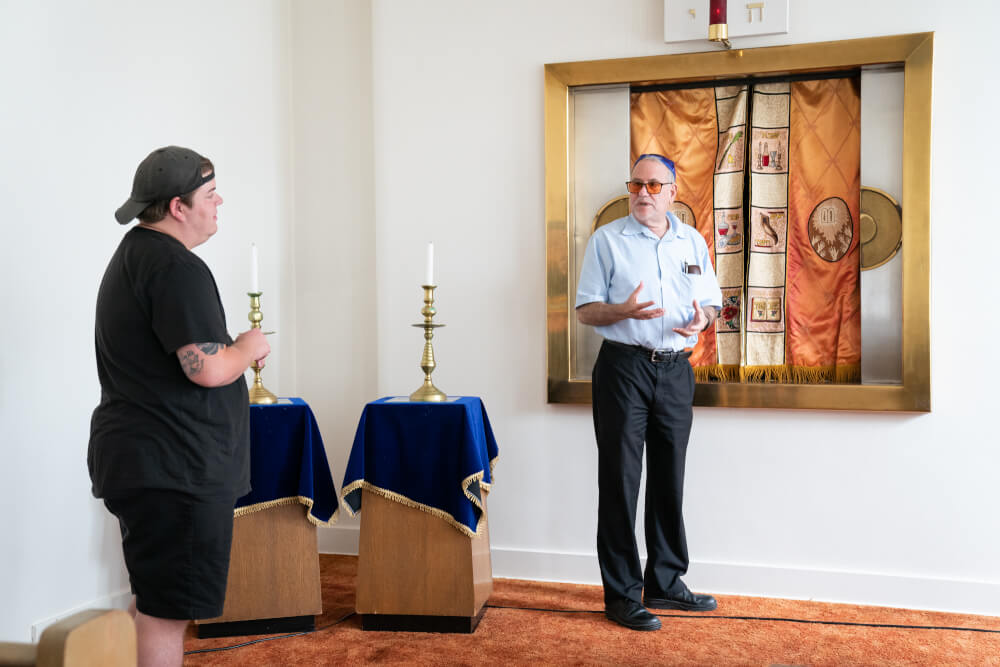 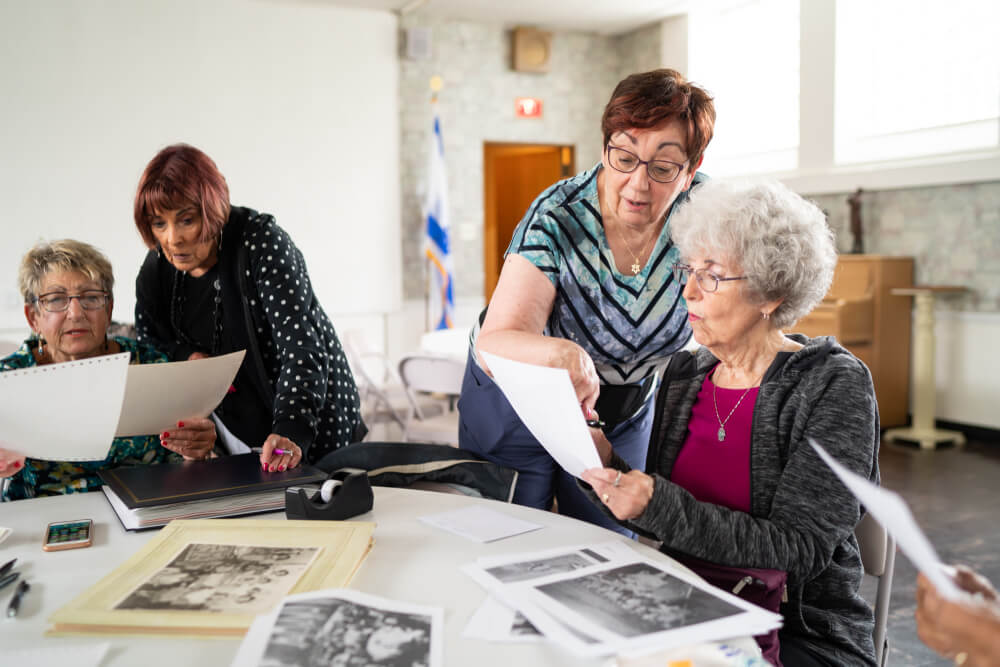 In the 1970s, the B’nai Israel Synagogue in Muskegon counted more than 120 families as members. Its roster has since dwindled to about 40 families due to deaths, relocations and attrition.

Marilyn Preston, associate professor of integrative studies and member of B’nai Israel, secured several grants to capture the oral histories of the synagogue's members. Next fall, these histories will be showcased in an exhibition at Muskegon's Lakeshore Museum Center.

The project, though, will yield more than a public exhibition and an archival piece for the synagogue. Through the process of interviewing members, at least one student from Preston's class has found a spiritual home.

Joel Hill, a senior majoring in integrative studies, took Preston's religion class last fall with the intent of learning more about Judaism. Like others in his class, Hill traveled to Muskegon several times for interviews.

"They made me feel like a part of the family," said Hill, who lives in Muskegon. "It was part of our class to come and do these interviews, and then I just continued to worship there."

Hill received a Student Summer Scholar grant from the Office of Undergraduate Research and Scholarship to continue working with Preston on the oral history collection. Preston received grants from Grand Valley's Kutsche Office of Local History and Center for Scholarly and Creative Excellence, in addition to a grant from Michigan Humanities to fund the project.

Preston and her family started attending B’nai Israel about three years ago. She said she quickly realized the congregation's story needed to be shared.

"I developed a plan with a class in mind to do oral histories. Students in the class developed research guides and decided what questions to ask, with guidance from the rabbi and his wife," Preston said. "We centered our interviews around what it means to them to be Jewish and how the temple has shaped their experience."

Hill remains heavily involved in the project and is busy securing materials like photos, newspaper clippings and other materials from members for the exhibition. He used a software program to design a 3D model of what "L’dor V’dor" will actually look like when it opens at the Lakeshore Museum Center in September 2020. "L’dor V’dor" is a Jewish term meaning "generation to generation."

He said visitors to the exhibition will see replica models of a classroom and chapel from the temple. It concludes with a replica of a dining room set for shabbat dinner and a bulletin board asking people to leave notes with an answer to the question, "How would you heal the world?"

"In the face of these tumultuous times, it will be nice to end with hope and have people leave on a positive note," Hill said.

The exhibition will open at the Lakeshore Museum Center in September 2020 and remain on display through April 2021. 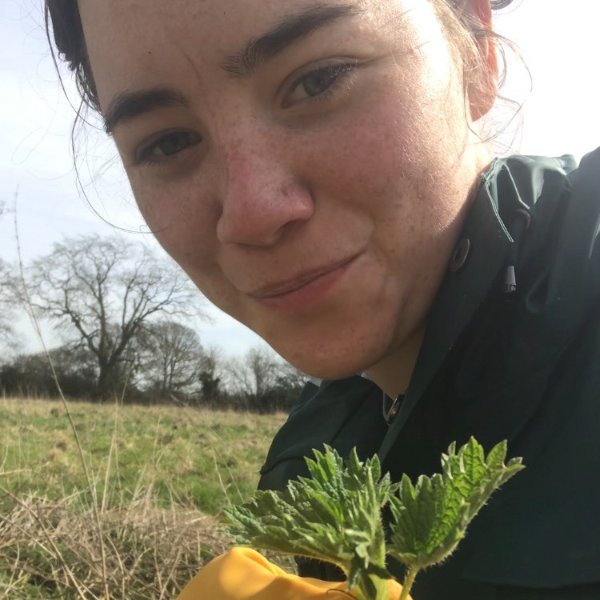 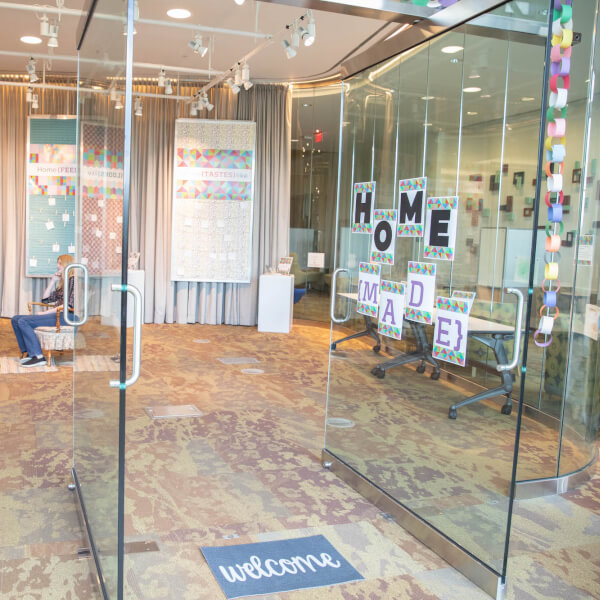 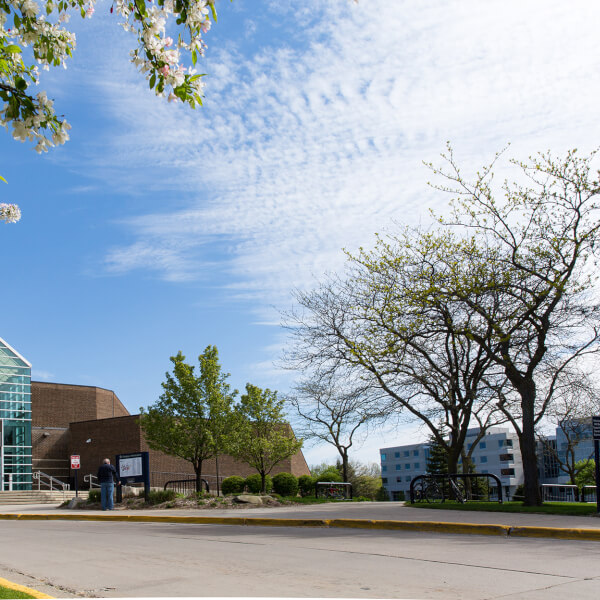