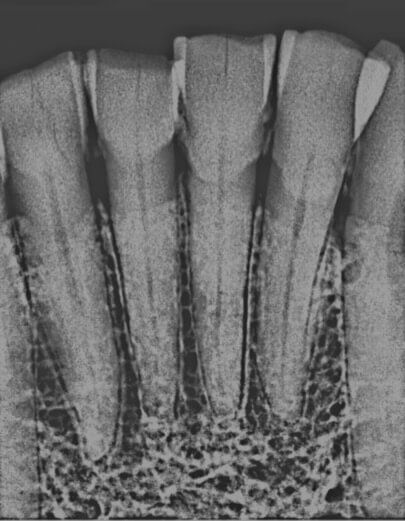 Using an X-ray is part of the research technique.
Image Credit: Courtesy of Gwyn Madden

Skeletal remains hold many mysteries, but a Grand Valley anthropology faculty member and student have carried out research using a technique that is allowing experts worldwide to more accurately determine the age of a person at death.

The findings by Gwyn Madden, professor of anthropology, and Alyssa Piechocki, a McNair Scholar and anthropology major, will be added to a growing body of research that uses the tooth's pulp chamber, rather than the erosion of enamel, to assess an age range of a skeleton. Aging of skulls is used for forensic and archaeological purposes as well as in living populations, such as refugees who may not have legal documentation of their age, Madden said.

Research using the study of the pulp chamber have been done on skeletons in other parts of the world so Madden and Piechocki traveled to Thailand to see if there are differences in populations. In Thailand there is a cultural reverence for donating bodies to science, Madden said, allowing her and Piechocki to examine modern skeletons in the collection they were presented.

"This collection was very much comparable to living people," Madden said.

Examining pulp chambers -- which fill in as people get older -- is promising for better determining an age on a skeleton because that area of the tooth is more protected than enamel, Madden said. With enamel studies, researchers could only determine an age range for skulls up to about middle age; with pulp chamber studies, they are able to pinpoint age groups in a range up to the 60s with a diminished error rate.

Madden and Piechocki X-rayed the teeth, used pixels to measure the filling in the pulp chamber and then used an equation to produce their findings.

Piechocki said the experience was invaluable not only for what she learned from the research but also about how to conduct it in sometimes trying circumstances. She and Madden faced technical difficulties with the camera and teeth that were not useable for research, reducing the sample size, but Piechocki learned how to persevere through inevitable setbacks by watching Madden's unflappable approach.

She came away with a deeper interest in forensic anthropology that was bolstered by observing Madden's overall assessment of each skull and recognizing her own appreciation for the information the skull held.

"They all have their own stories," Piechocki said. "You can tell so much from a skeleton without words and it's kind of like putting a puzzle together."

Piechocki will have a chance to deepen her interest further when the Midwest Bioarcheology and Forensic Anthropology Association holds its annual meeting at Grand Valley Oct. 19; Madden is a key organizer for the event.

There also are plans to write an article about the research in Thailand.