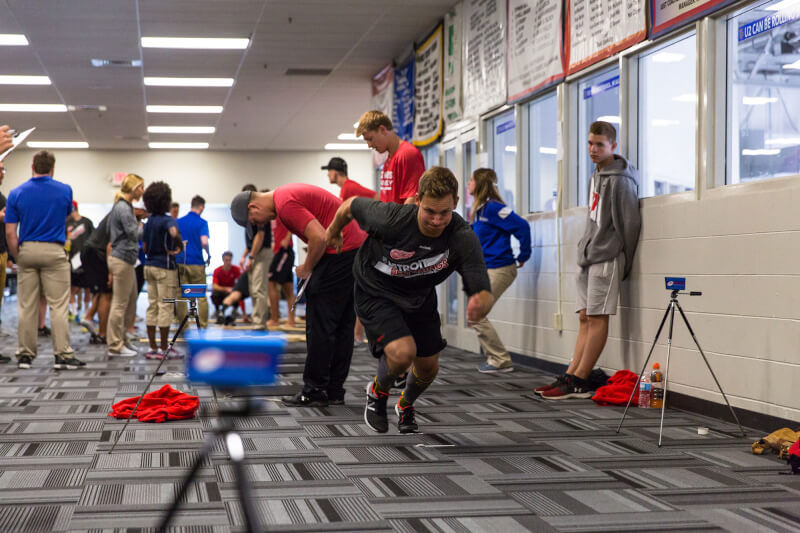 GVSU students have been assisting with Red Wings preseason camps since 2014 and have thus far participated in 13 total camps.
Image Credit: Dan Mannes

Sherman said one of the greatest benefits for students who attend the camps is the opportunity to apply the theories and skills they’ve learned at Grand Valley in a professional setting.

“Another benefit is being given a high degree of responsibility and also the trust placed in them to execute their tasks accurately,” Sherman added. “They are representing not just themselves but also the program, department and Grand Valley.”

Erik Braun, a senior majoring in athletic training, said this was his second year working at the camp, and it reaffirmed that the field of sports medicine is where he wants to be after graduation.

“Having this experience has allowed me to connect with extremely knowledgeable people who have insights into this professional setting,” said Braun, from Garden City, Michigan.

Braun said during the camp he found value in learning how the testing connected to the players’ strength and conditioning programs while also identifying possible injury risk.

“Preventing an injury from occurring in the first place is ideal, therefore, seeing how the data we collected was applied in prevention really tied together a lot of the concepts I have been taught at GVSU,” he said.

This year was Ashley Laframboise’s first experience working a Red Wings camp. She said she enjoyed the fast-paced environment of working with professional athletes.

“It was intense and we just flew through getting the measurements and data for so many players,” said Lamframboise, a senior majoring in clinical exercise science. “We managed to get through more than 60 players in less than three hours because it was just a constant flow coming through.”

Lamframboise said she had to contain her excitement about working with the Red Wings players during the camp.

“The thought that talking and working with professional athletes so nonchalantly was awesome, but I obviously had to contain myself and remain professional,” she recalled. “Working with the players was great, and we were able to talk with them and share a few laughs here and there.”

Braun said being able to help the players perform was a surreal experience.

“A lot of us grew up watching some of these guys and are still fans, but you try not get star struck,” he said. “In the end, we are there for their benefit and to help the organization. We're there doing what we love as well as helping them accomplish their dreams.”

In June at Little Caesar’s Arena in Detroit, 36 students assisted with the testing of draftees and prospective players during a development camp by running tests ranging from performance tests and movement screens to anthropometric measurements.

Students have been assisting with the Red Wings camps since 2014 and have thus far participated in 13 total camps with the team.