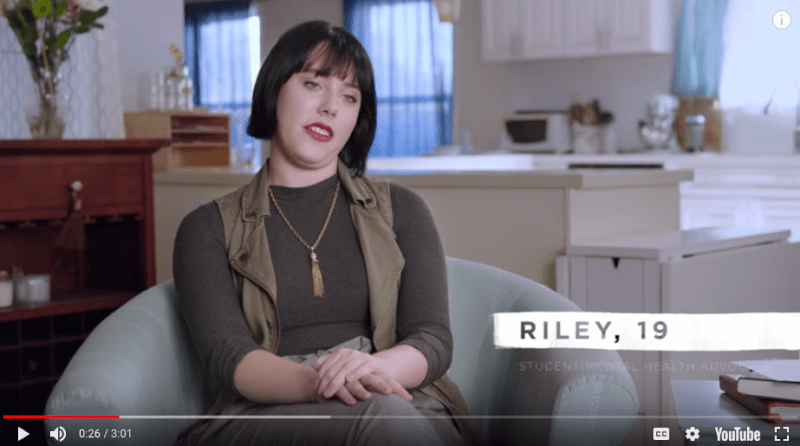 Riley Juntti is pictured in a video for 'Tell Them,' a mental health awareness campaign.
Image Credit: courtesy of Netflix

While most college students view Netflix as a way to take a study break or procrastinate, one first-year student views the streaming service as something much more: a platform to promote mental health resources.

Riley Juntti, who is majoring in adolescent psychology, is a part of the new Netflix campaign, “Tell Them,” in which she shares her mental health story in anticipation of the second season of the show, "13 Reasons Why."

Juntti's work began when she was a senior at Oxford High School. She was one of 13 students who shared a story of emotional vulnerability for a project, "13 Reasons Why Not." Juntti said the program showcased student struggles somewhat like the TV show, but instead allowed speakers to name someone who helped them rather than those who have had a negative impact.

"We saw a lot of healing through the sharing of stories," she said.

The Oxford High School campaign made national headlines and soon Juntti was speaking to organizations as an advocate for mental health resources for teens. That's when Netflix noticed.

“I was actually in a Zumba class and when I checked my phone Netflix had tweeted me,” said Juntti. “It was surreal. I knew Netflix would allow me to reach a wider audience for my work. That night they booked me a flight to Los Angeles.”

Juntti said the campaign highlights the stories and struggles of real people. She shared how she suffered through an abusive relationship while in high school.

"I didn't want to live for a good portion of my life. I didn't tell anyone; I didn't tell my family, my friends or my teachers. I kept it to myself because I thought it was my problem," she said in the video.

Juntti, who also works as a crisis counselor for CrisisTextLine, believes resources are the path to help, but said many times teens either don't understand what resources are offered or they don't feel confident enough to reach for help.

Education and training are at the heart of Grand Valley's University Counseling Center, according to Brian Bossick, assistant director and coordinator of career development services.

“From QPR, a program that teaches students about the myths of suicide and how to intervene, to group work and education, our goal is to help students be advocates," Bossick said.

Juntti has certainly taken up the advocate torch. She said she hopes the new season of "13 Reasons Why" will highlight more options for help and resources.