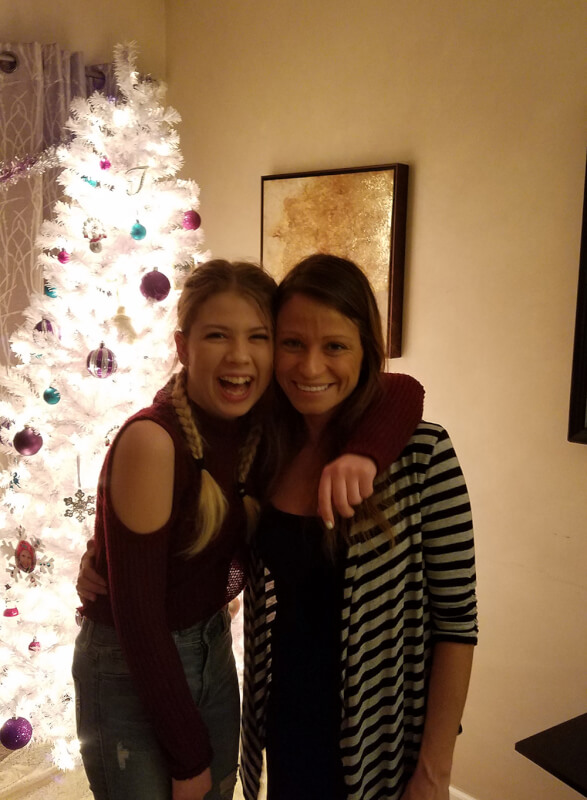 Melissa Miller, right, is pictured with her daughter, Tessaleia. Miller said she found confidence to speak about her experiences by taking more and more liberal studies courses.
Image Credit: courtesy of Melissa Miller

It was during a class project when Melissa Miller gave personal context to a subject foreign to most people: youth homelessness.

Miller is pursuing a bachelor's degree in liberal studies through Grand Valley's Traverse City Center. After aging out of the foster care system at age 19, Miller was homeless for several months living in a tent in the woods of northern Michigan.

Now 35, Miller said she never readily shared that period of her life until her management class started working on a campaign geared toward increasing awareness of youth homelessness.

"After leaving foster care, I filled out applications for apartments but I couldn't get in anywhere because I didn't have any credit or a co-signer," she said. "So I had a tent and a sleeping bag and was camping in random places in the woods."

It was adjunct faculty member Christine Allen who gave that assignment to Miller's management class. Allen is the coordinator of the Northwest Michigan Coalition to End Homelessness, a collaborative group of human service organizations in Northern Michigan. She arranged for a speaker who works with homeless teens to give a presentation to the class.

"At one point he mentioned that most youth don't really think of themselves as homeless so they're less likely to reach out for help beyond a friend or family member," Allen said.

That's when Miller told the class about her experiences, and classmates later asked if she would be willing to be interviewed for a radio program.

"This isn't something Melissa had really talked about in school or publicly before, but through our discussion she learned how uninformed both the community and young people experiencing homelessness are," Allen said. "She could teach people about the reality of youth homelessness and give the message to young people that there is help and they don't have to do this alone."

Miller, who works full time as a server at the Bayview Inn in Traverse City, said telling her story was difficult but she gained confidence through each Grand Valley class.

"Through my work in the Liberal Studies program, I became more comfortable in my own skin. It's because of how much I've grown that I was able to do the radio program, and I wanted to help the cause," she said.

Miller earned an associate's degree from Northwestern Michigan College. In 2016, she enrolled at Grand Valley with plans to eventually earn a master's degree in occupational therapy.