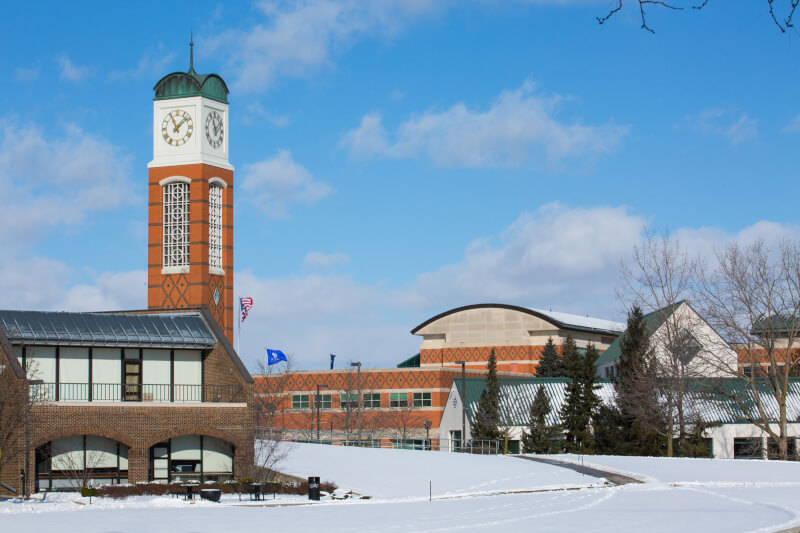 Standing at 100 feet to the top of its spire, the Cook Carillon Tower is a Grand Valley landmark nestled in the heart of the Allendale Campus.

On November 28 from 1-3 p.m., the Grand Valley community is invited to tour the massive structure that was built and installed in 1994. Hosted by University Communications, the tours will be facilitated by Julianne Vanden Wyngaard, university carillonneur. Light refreshments will be available.

Vanden Wyngaard will also perform a holiday concert on the Beckering Family Carillon on December 24 on the Pew Grand Rapids Campus from 9:30-10:15 p.m. This concert will be free and open to the public.

Named for major donors and longtime Grand Valley supporters Peter and Pat Cook, who died in 2010 and 2008 respectively, the Cook Carillon Tower contains 48 bronze bells created in the Netherlands. The size and weight of each bell determines the individual tones. The bells range from 7.5 inches to more than 51 inches, and weigh from 14 to nearly 3,000 pounds.

Arranged in a chromatic series, a carillonneur plays the bells after climbing 61 steps to the playing cabin, just below the bells and clock mechanism. Cables connect the bells to a keyboard and pedal board that permit loud or soft tones through a variation of either hard or soft strikes by fists and feet.

The Beckering Family Carillon Tower was dedicated in Fall 2000 with the support of the Beckering family of Pioneer Construction. The 151-foot bell tower completes the look of a European village square on the Pew Grand Rapids Campus and contains 48 bronze bells cast at the Paccard Bell Foundry in France. The largest bell, called the "bourdon," weighs 4,500 pounds; the smallest weighs 25 pounds.