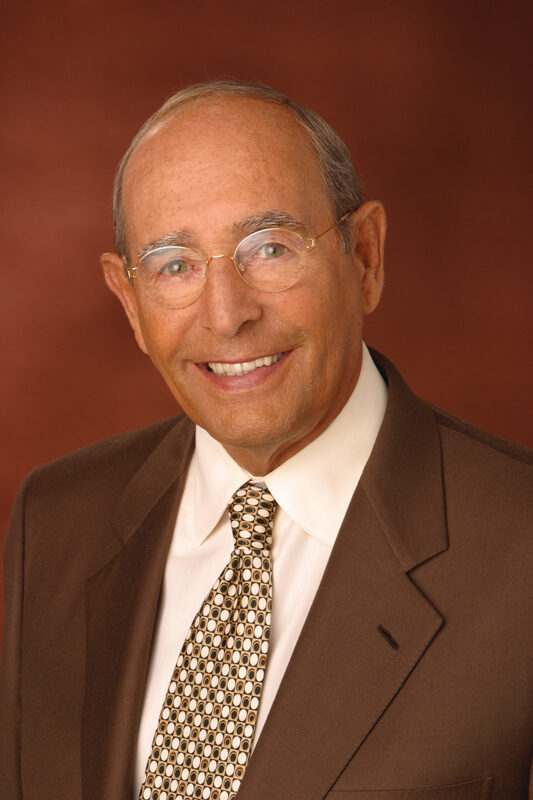 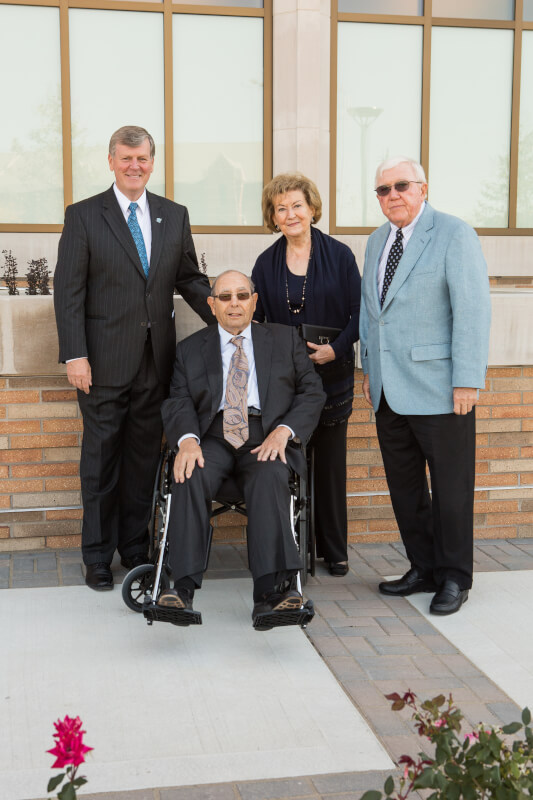 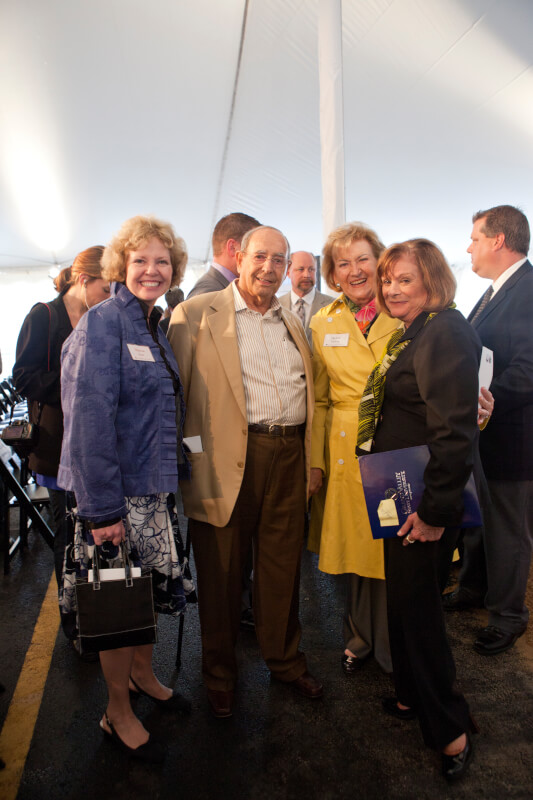 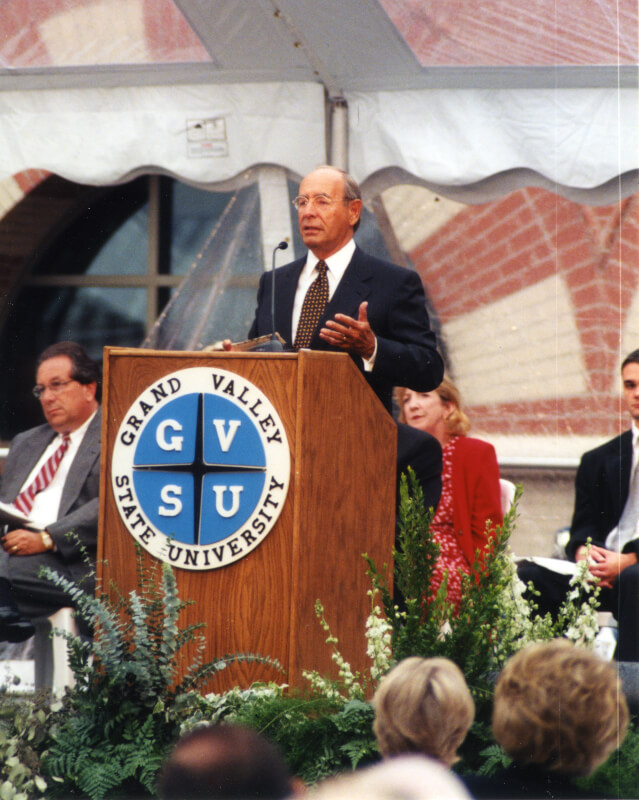 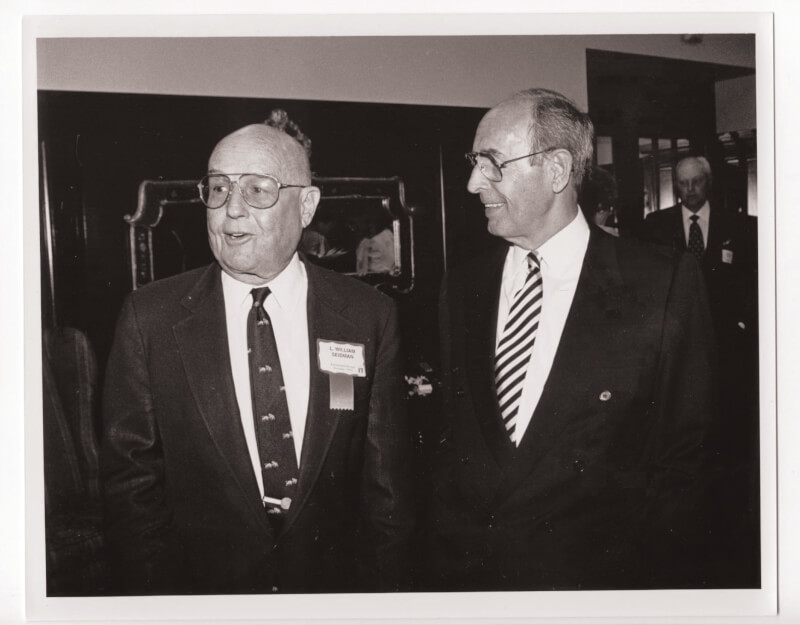 Rich DeVos, on right, with the late Bill Seidman, one of the founders of Grand Valley and namesake of Grand Valley's Seidman College of Business.
Image Credit: University Communications 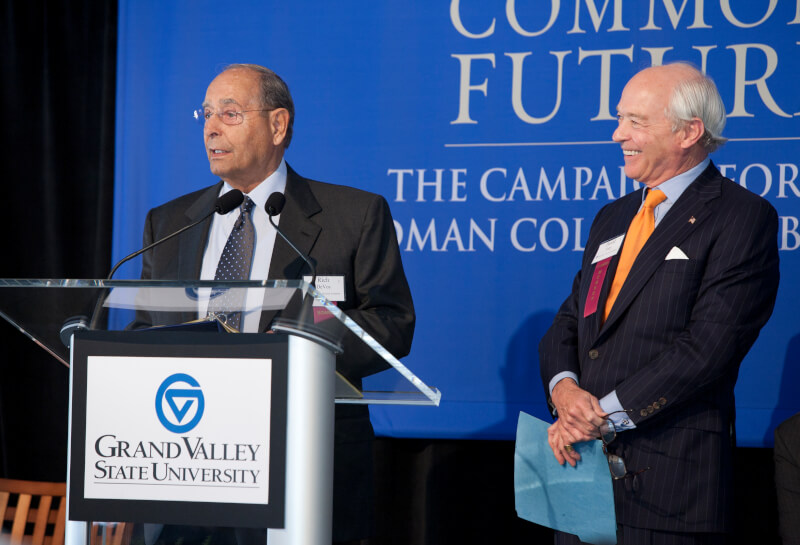 Rich DeVos with David Frey, former chair the Grand Design 2000 Committee which raised the funds for the DeVos Center, and former co-chair of the Shares in a Common Future campaign.
Image Credit: University Communications 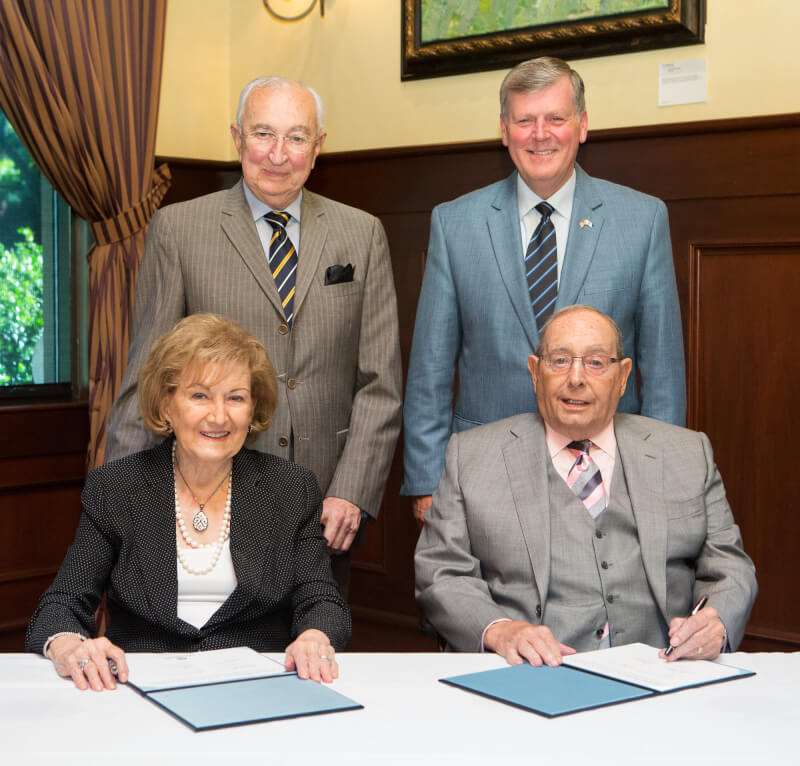 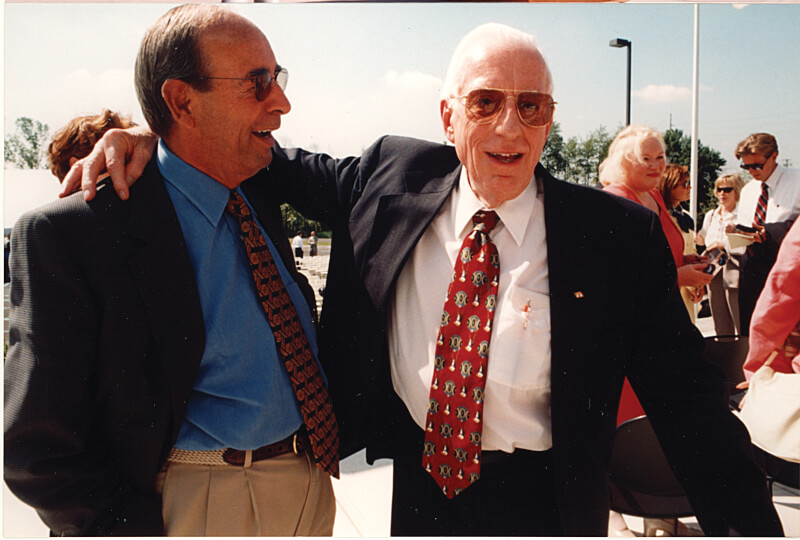 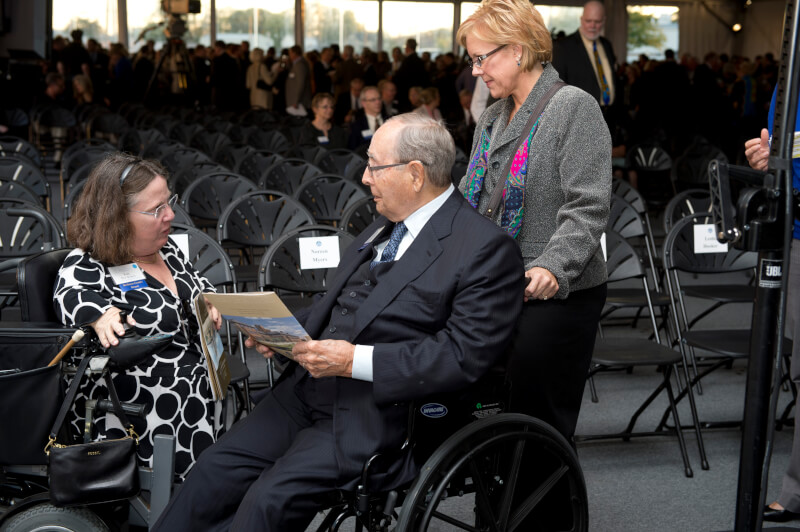 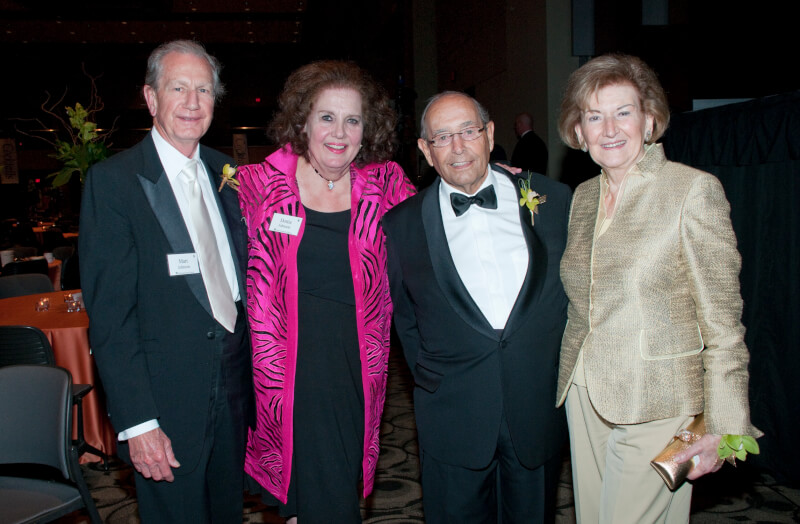 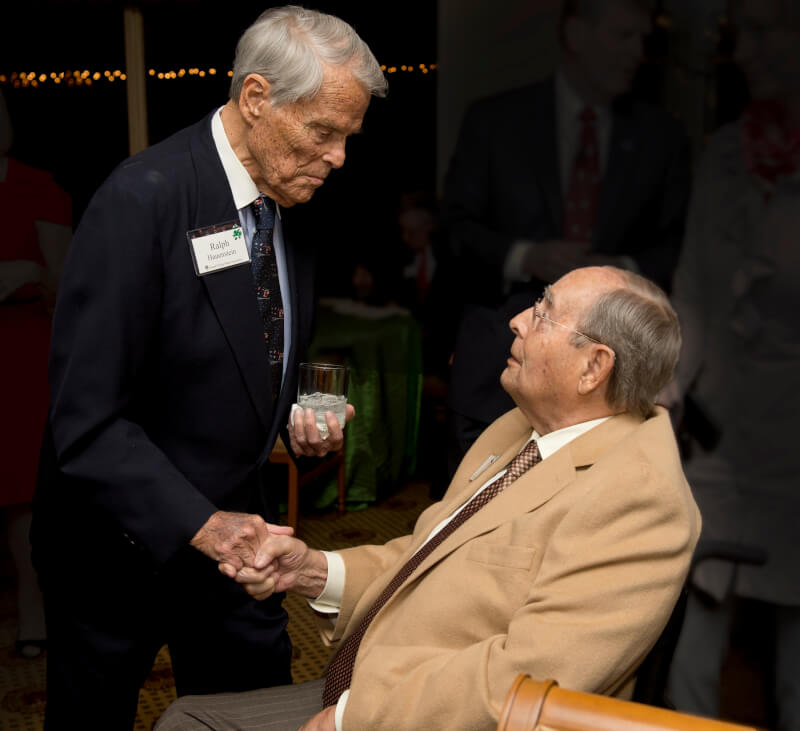 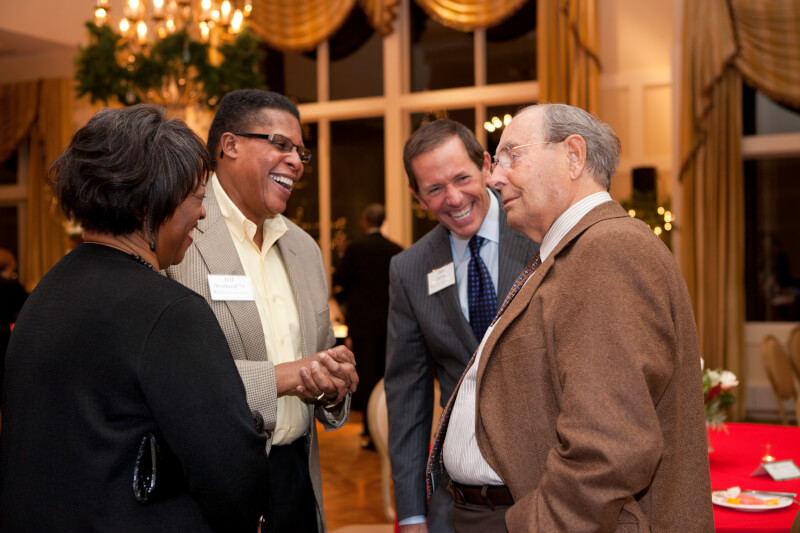 The Grand Valley State University community joins people around the world in mourning the death of Richard M. DeVos, one of the university's greatest leaders, who died September 6 at age 92.

"There are no words to describe how much Rich DeVos will be missed by Marcia and me personally, our university, and the entire West Michigan community," said Grand Valley President Thomas J. Haas. "Rich gave so much of himself to Grand Valley. His enthusiasm and vision were contagious, and drew the entire community together to help provide a world-class education to West Michigan citizens. The university would not be what it is today without his and Helen's leadership and generosity. His legacy lives on in the lives of the thousands of students he has touched. Our hearts are with the DeVos family at this time."

DeVos' dedication to Grand Valley grew over the decades. He served on what was then called the Board of Control for Grand Valley in the 1970s, providing critical leadership and personal resources. He joined the Grand Valley University Foundation Board in 1982 and became its third president. DeVos served as president for an astounding 24 years, becoming chairman emeritus in 2016.

"Early on, Rich understood the strategic importance of West Michigan having a local university for talent development," said GVU Foundation General Chair Jim Brooks. "With all the things he had on his plate, he still found time and energy to provide leadership for the GVU Foundation for 24 years. That is a testament to his commitment to our students and the citizens of this region. Donna and I, and our foundation directors, will dearly miss him as a friend, a colleague and a role model for all philanthropists."

In the 1990s, DeVos created the Land Barons Club at Grand Valley. This small and informal group of philanthropists played an instrumental role securing land and funding for the Grand Design 2000 Campaign, which expanded Grand Valley's downtown campus. DeVos served as an honorary chairman of the campaign, and the university recognized his service and generosity with the naming of the Richard M. DeVos Center.

"Rich was a great leader who always sought to bring people together on big projects. Grand Valley was such a project,” said Grand Valley's past president Mark Murray. "Thousands of donors, including dozens of major contributors, came together to build the magnificent campuses of Grand Valley. Many were encouraged in that work by Rich's personal request, his leadership and his and Helen's personal generosity."

In 2000, DeVos' leadership and encouragement helped to raise the initial match needed to launch construction of Grand Valley's Cook-DeVos Center for Health Sciences, assuring that education would join health care research and delivery as a cornerstone of the emerging health enterprise in Grand Rapids.

Both Rich and Helen served as honorary co-chairs of the Shaping Our Future campaign, which expanded scholarships for students, improved and expanded Grand Valley's facilities, strengthened key programs, and provided much-needed support to faculty. The DeVoses also made the lead gift to help build the L. William Seidman Center to house the Seidman College of Business and expand the university's Robert C. Pew Grand Rapids Campus. The couple felt it was important for the community to honor Seidman's legacy and statesmanship. Most recently, DeVos shared the vision for the university's Health Campus expansion and was instrumental in the current Laker Effect campaign. This included generous support for the Center for Interprofessional Health, under construction on Michigan Street in Grand Rapids, and active engagement in raising support for the project during 2018.

Grand Valley President Emeritus Don Lubbers, who worked side by side with DeVos, said Rich's passion for education and for West Michigan's young people will live on through Grand Valley State University for generations to come.

"Over the years, Rich and I worked closely together and developed a partnership and friendship that will always hold a special place in my heart," said Lubbers. "It was a joy to work with him to create the downtown campus for Grand Valley and to be a part of his vision for the future of our community. He will be deeply missed."