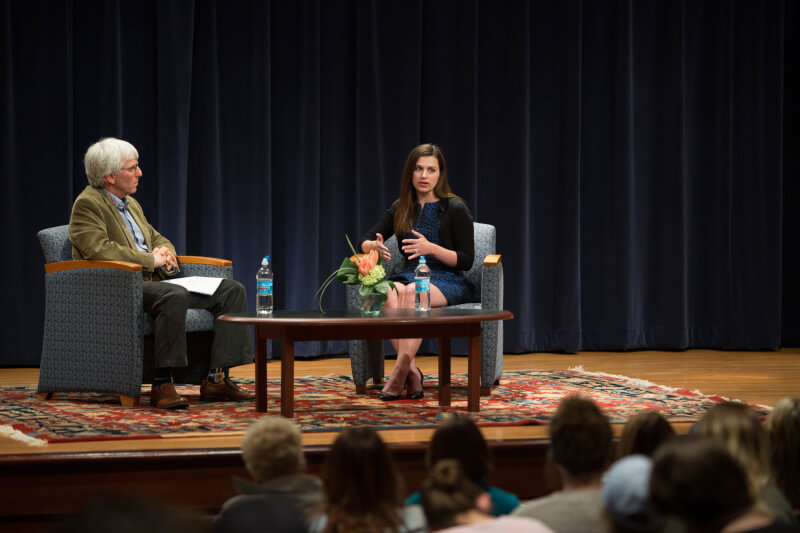 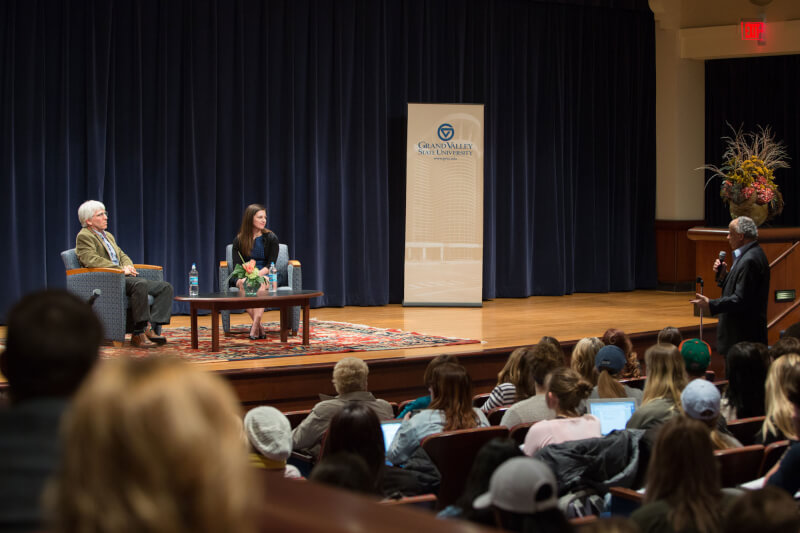 Kwiatkowski answered questions from the audience during the event.
Image Credit: Valerie Wojo 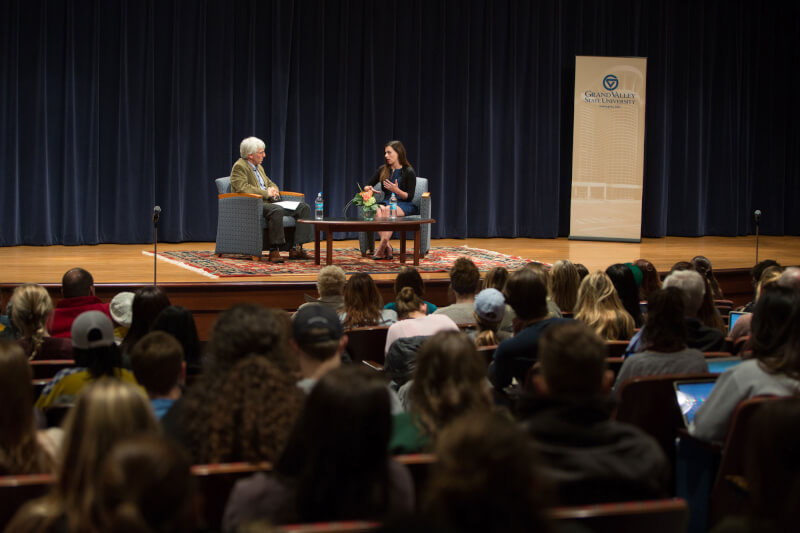 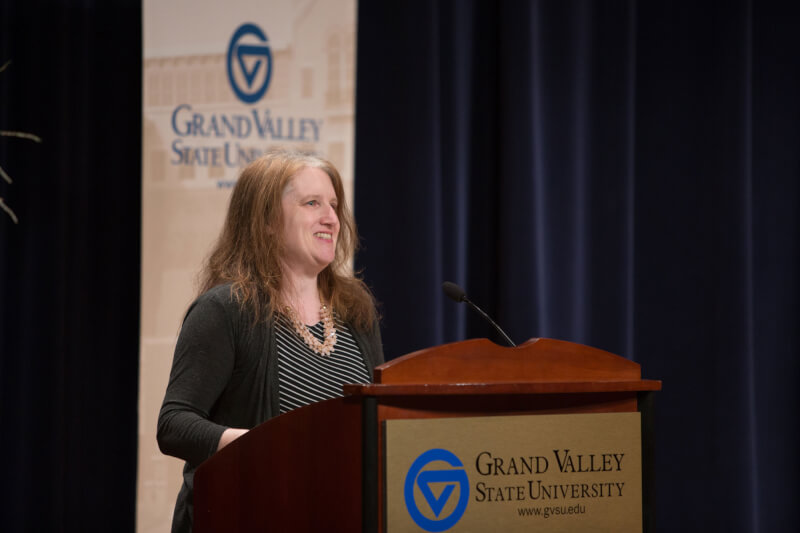 Marisa Kwiatkowski was one of three IndyStar reporters, along with Tim Evans and Mark Alesia, who broke the USA Gymnastics sexual abuse story that led to the conviction of sports physician Larry Nassar. More than 250 individuals have come forward with allegations of abuse against Nassar since Kwiatkowski’s investigation began in 2016.

Kwiatkowski, who graduated from Grand Valley in 2005, shared anecdotes and insights about the investigation during a March 26 event on the Pew Grand Rapids Campus.

During the event, Kwiatkowski discussed how the entire investigation began with a tip that encouraged her to take a deep look inside the USA Gymnastics organization.

“With any story, reporters get hundreds of tips, and for me it was really about what’s the minimum story that come out of this and what’s the maximum story,” said Kwiatkowski. “It was pretty clear from the tip that I had gotten and the phone calls I had made that this was going to be important.”

Kwiatkowski flew to Georgia the same day she received the tip to examine about 1,000 pages of court records, documents and depositions. She recalled that many of the depositions were from current and former USA Gymnastics officials outlining the organization’s policies for handling sexual abuse allegations.

“What they showed was that they had a policy of dismissing allegations as hearsay unless they have been signed by a victim, a victim’s parent, or an eye witness of the abuse,” said Kwiatkowski. “Those pieces of depositions really became the key to the start of our investigation.”

Throughout the investigative process, Kwiatkowski prioritized showing sensitivity and respect toward the survivors whom she interviewed in order to authentically build trust.

She said that when interviewing any survivor of abuse, she first thoroughly explains the scope of her investigation and helps them understand how their story fits into the broader piece.

“I also explain that it’s their story and if I ask them a question that they’re uncomfortable with or don’t want to answer, they are under no obligation to do so. And, before I ask a single question, I ask them if they have any questions for me,” said Kwiatkowski. “That really sets the tone to put people at ease and the last thing I want to do as a reporter is traumatize someone who has already been traumatized.”

Following the discussion about the Nassar investigation, Kwiatkowski stressed the power of investigative journalism to affect change — a sentiment that rang through her mind as she watched survivor after survivor come forward.

“My overwhelming thought in watching that was that they were finally getting justice and the chance to share their stories,” said Kwiatkowski. “And it also showed the power of one voice, because at the time that sentencing hearing started, there weren’t supposed to be 156 survivors sharing their stories, but it was because other people shared theirs that it gave others strength to share. That was amazing to watch.”

Reflecting back on the investigation, Kwiatkowski expressed gratitude toward everyone who trusted the IndyStar team enough to share their stories.

“Every person who shared their story with us led to somebody else having the courage or the comfort to come forward and share what happened to them,” said Kwiatkowski. “The more that happens, the more that people feel a sense of safety that they will be believed and then more people like Larry will be taken off the streets.”

Kwiatkowski is an accomplished journalist who has earned more than 40 journalism awards throughout her career, including Indiana Journalist of the Year, the Tom Renner Award from the Investigative Reporters and Editors organization, a Sigma Delta Chi Award in public service, the Casey Medal for Meritorious Journalism and the Will Rogers Humanitarian Award.

Kwiatkowski’s presentation was the inaugural event in a new series presented by Grand Valley’s School of Communications. The Robert Mayberry Comm-Unity Series honors the memory of Mayberry, professor emeritus of communications and philosophy, who died in December.

During his time at Grand Valley, which began in 1971, Mayberry advocated for his vision of diverse academic programs that would nurture productive connections between students and the Grand Valley community.

This year’s Comm-Unity event was sponsored by Grand Valley's School of Communications, Department of Public Safety, Division of Inclusion and Equity and College of Liberal Arts and Sciences, along with the Center for Women In Transition and 8THIRTYFOUR Integrated Communications.