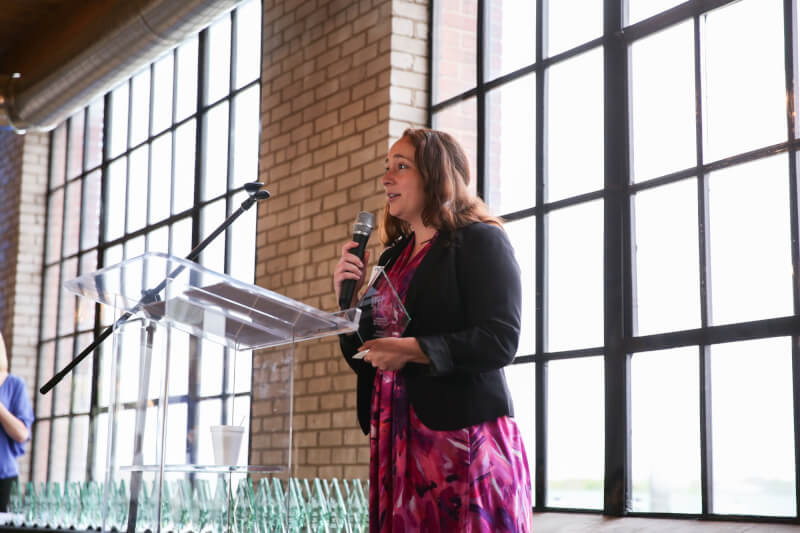 A recent Grand Valley graduate has been named the recipient of the Public Relations Society of America’s National Gold Key award — the highest individual honor given by the organization.

Jaclyn Ermoyan, ’17, will receive the award in October.

“I’m so grateful I won a National Gold Key because I know how validating it is in the public relations profession,” she said.

The annual award honors outstanding public relations students and leaders. Recipients are those who excel in their academic study of public relations, have pursued multiple professional development opportunities, and serve as leaders in their local PRSA chapters.

Ermoyan said her time participating in experiential learning at Grand Valley helped propel her to success.

“In my experience, Grand Valley’s advertising and public relations program is the best of the best,” she explained. “The professors are extremely relevant to the industry and teach by using real clients. Working with clients in the classroom allowed me to excel in the workplace, which was an important balance needed to earn this award.”

The National Gold Key is not the first award Ermoyan has received from PRSA. In May, she also received the distinction of Public Relations Student of the Year, an award given by the West Michigan chapter of PRSA.

Ermoyan is currently an intern at Quicken Loans where she manages the company’s social media accounts, as well as the accounts of Quicken Loans executives. When her internship concludes in July, she will participate in the AmeriCorps National Civilian Community Corps program where she will be traveling throughout the southern United States completing various community service projects.

While at Grand Valley, Ermoyan served as the CEO of the university’s award-winning, student-run public relations firm GrandPR. In this role, she managed a team of more than 25 students and various projects for community clients.

Ermoyan additionally co-created Humans of Grand Valley, which is an initiative to share Laker experiences that aims to encourage a strong sense of community on campus. Ermoyan was also an integral part of planning the TEDxGVSU event in February.

During her time at Grand Valley, Ermoyan gained professional experience working in University Communications, the Career Center and University Development, and participated in the Cook Leadership Academy.