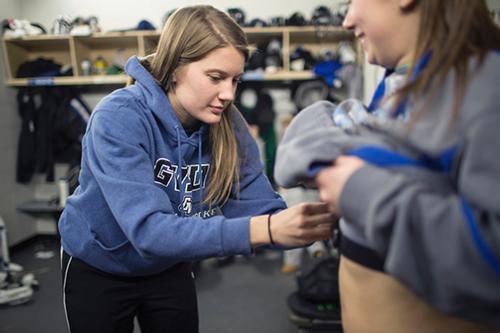 It's not often a student can combine a research project with the sport she plays.

Karyn Schmaltz is a student in the Meijer Honors College and member of Grand Valley's women's hockey team. She is using her teammates plus players from the men's team to help with her senior thesis: researching shift length and energetics during a collegiate hockey game.

Schmaltz, an allied health science major, said this would be the first study that includes data on women hockey players. She is also researching the differences in calories burned between men and women, and forwards and defensemen.

"We are going to produce baseline information that is currently missing from literature," Ocobock said. "Also, we collected data on shift length, which had not been studied since the 1970s."

Ocobock said she hopes their data would update conclusions from the ’70s that a player's shift length increases as the game progresses.

To collect data, Schmaltz placed heart rate monitors on 10 players on the women's team and 10 from the men's team. Then she enlisted an army of assistants to sit in the stands at Georgetown Ice Arena and track the shift length of their assigned player using stopwatches.

Each subject's body mass was measured to estimate accurate energy expenditures. Schmaltz estimated that while playing 45-second shifts during an entire game, women burned about 800 calories and men burned about 1,200 calories.

"Knowing accurately how many calories they are burning would help with nutrition and hydration," Schmaltz said.

Schmaltz is from Tinley Park, Illinois, southwest of Chicago. She grew up playing hockey and came to Grand Valley to continue playing at the club sport level.

"My dad was my coach for a long time. My brother is at Grand Valley also, playing roller hockey," she said.

Schmaltz plans to present her research during Student Scholars Day on April 13.