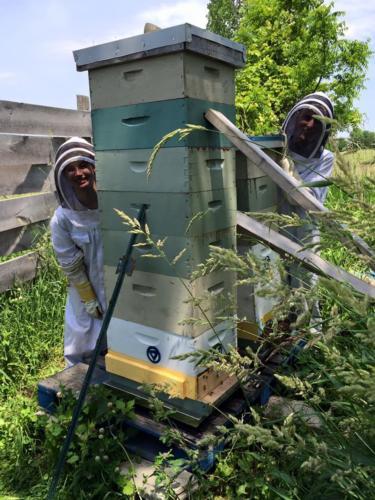 Emily Noordyke, left, and Kali Smolen stand by bee hives; Noordyke is caring for the bees and collecting data as part of her Student Summer Scholars work. 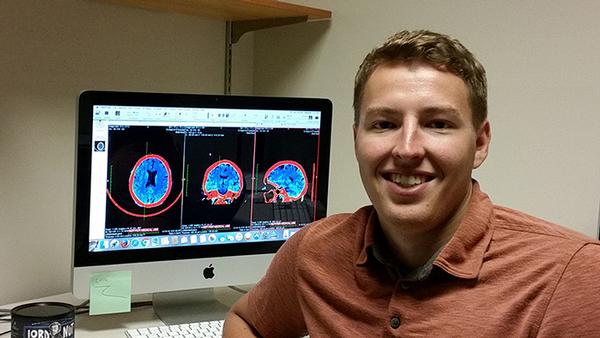 Emily Noordyke turned her hobby into a research project; Eric Sheffield linked his experience with dementia patients to his research on brain density.

They and more than 30 other students will present their research and scholarship during the annual Student Summer Scholars Showcase, set for August 2 from 4-7 p.m. in the DeVos Center, Loosemore Auditorium. The event is sponsored by the Office of Undergraduate Research and Scholarship; people who want to attend are asked to RSVP by July 22 by sending an email to ours@gvsu.edu.

McNair Scholars and Student Summer Scholars work with faculty mentors throughout the spring/summer semester on a research project.

Noordyke, a biology major from Grand Rapids, said her interest in beekeeping led her to join Grand Valley's student organization dedicated to the honeybee. She met her mentor, Anne Marie Fauvel, affiliate faculty of liberal studies, through the student club.

Noordyke, who is also a Schroeder fellow, spent her summer collecting data and caring for the bees in apiaries at the Meijer Campus in Holland and the Sustainable Agricultural Project on the Allendale Campus.

Using a hive scale created by Grand Valley students in engineering and computer science, Noordyke is studying colony growth and if the bees are collecting the pollen they need to thrive. She and Fauvel hope to develop a protocol that would help beekeepers learn more about the forage availability that surrounds colonies.

Sheffield, a member of the Meijer Honors College, is working with Chris Reed, associate professor of biomedical sciences, to develop a baseline study of the density of the brain's dura matter. The dura is connective brain tissue and Sheffield said scientists have speculated on the dura's thickness as a possible indicator of early-onset dementia.

"There is so little research out there, it's hard to draw conclusions," Sheffield said. "There needs to be a baseline for what is normal, in terms of significant density of the dura."

For their research project, Sheffield has studied 36 brain scans at nearly 20 different data points. He said the next stage of this research could involve brains from primates.

He spent a previous summer learning and observing the human side of dementia, as a certified nurse aide in a dementia unit of an assisted living center. Sheffield plans to be a physician and has been accepted into the Michigan State University College of Human Medicine.