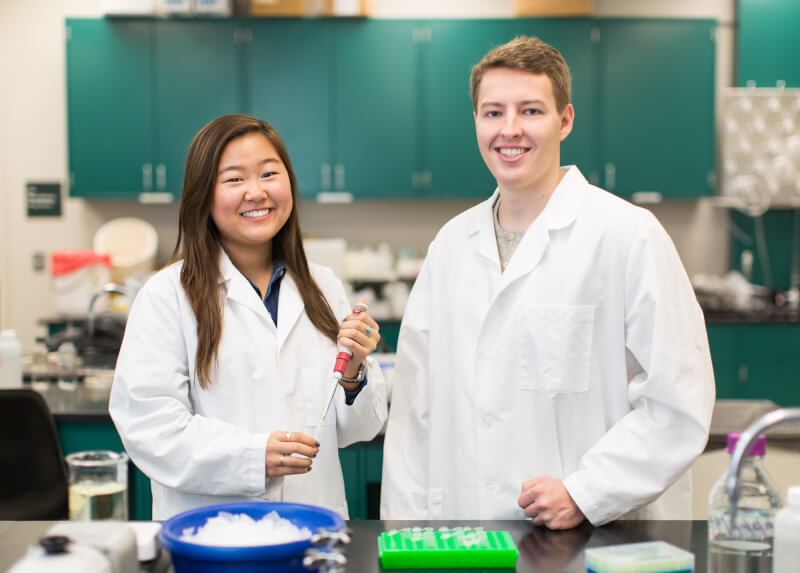 Jinah Bak and Eric Sheffield met during a Health Career Pipeline program when Bak was in high school. They connected again as pre-med students at Grand Valley.

When Eric Sheffield arrived at Grand Valley, he didn't know anyone and stumbled a bit before settling into a pre-med plan and majoring in biomedical sciences.

Partly because of that experience, Sheffield has extended a warm Grand Valley welcome to a first-year student whom he mentored while she was in high school.

Their formal mentor-mentee relationship ended in March at the conclusion of the eight-week Health Career Pipeline program. Sheffield asked Bak, who was accepted into Grand Valley, if she wanted to continue connecting when she got to campus.

"When I first started college, I didn't know anyone on campus, and no one in my family is in medicine, so I had lots of questions about what steps to take," said Sheffield, who is president of Grand Valley's Pre-Med Club. "I wanted to be able to help someone else in that situation."

During her last year at Grandville High School, Bak was dual-enrolled in Grand Valley health sciences courses through the Kent Career Tech Center’s Health Sciences Early College Academy. She took courses at the Cook-DeVos Center for Health Sciences in the afternoon, after spending the morning at the high school. It was Early College Academy instructor Russell Wallsteadt who encouraged Bak to join the pipeline program and to consider Grand Valley.

Bak is also a Pre-Med Club member and considering a career in medicine. "It's been nice having Eric to talk to and answer questions," she said, adding they have met several times during the fall semester.

Sheffield will graduate in April; he was accepted through the early assurance program into MSU CHM and will start next fall.