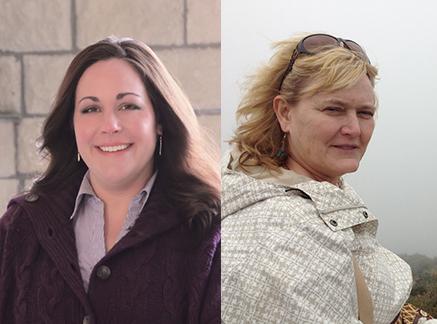 Jennifer Strange, left, and Bridget Bailey both took classes at the University Center in Traverse City for their degree programs.

Grand Valley representatives will join colleagues from seven other institutions to help Northwestern Michigan College celebrate the 20th anniversary of its University Center.

A celebration is planned for September 17.

Two Traverse City area residents, Bridget Bailey and Jennifer Strange, are among the 1,250 students who began taking classes at NMC and matriculated to Grand Valley with assistance from the University Center.

Bridget Bailey, of Williamsburg, said the University Center helped make her dream of becoming a teacher a reality.

"I was 40 and going back to school," Bailey said. "The nice thing about the University Center is that faculty and staff members are ready and able to assist working people, and they offer a lot of evening and weekend classes."

Bailey earned a bachelor's degree in English education with a minor in Spanish from Grand Valley. While her education classes were held at the University Center or NMC's campus, she traveled to Allendale for Spanish classes.

She now teaches Spanish at Elk Rapids Cherryland Middle School. In 2013, Bailey was among nine educators from the U.S. who received Fulbright-Hays scholarships to travel and study in Costa Rica.

Jennifer Strange, of Traverse City, earned a master's degree in social work from Grand Valley. She was a patrol officer for the Traverse City Police Department but the birth of her son prompted her to seek out another career.

Strange now works as a clinical social worker at Pugsley Correctional Facility in Kingsley, where she sees inmates who are referred for mental health reasons. Strange said her role is the perfect marriage of her two degrees; she earned a bachelor's degree in social and criminal justice from Central Michigan University.

"This degree has opened up a whole new chapter for me: macro social work issues, dealing with policies and practices," she said.