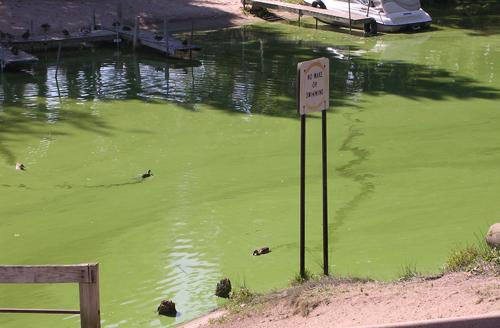 Researchers at Grand Valley State University’s Annis Water Resources Institute are learning more about the impact invasive zebra mussels and native aquatic insect larvae have on the risk of algae blooms in two West Michigan lakes. The results of the research will be published in the journal Oikos.

Postdoctoral researcher Geraldine Nogaro and AWRI director Alan Steinman studied the impact that invasive zebra mussels and native chironomid larvae have on nutrient releases in Muskegon Lake and Bear Lake. While studying the mussels, Nogaro and Steinman noted that filter feeding and excretion activity by invasive mussels stimulated nutrient releases in the water column. The other subject of the research was the impact of native chironomids, which are insect larvae that live in the sediment on the lake bottoms. The researchers found the chironomids burrowed into the sediment, moving water and oxygen into the sediment and increased the levels of nutrients released into the sediment pore water and water column.

“When nutrient levels increase, so does the risk of stimulated algae blooms,” Nogaro said. “The blooms are problematic because you can’t enjoy the lakes, and because certain blooms of cyanobacteria can release toxins into the water, which impacts fish and other wildlife.”

Nogaro also said bacteria growing on decomposing algae blooms can suck up valuable dissolved oxygen in the lake, which can result in large fish kills in the affected areas.

The research reinforces the need to monitor the numbers of mussels in the lake, along with the need to reduce human nutrient input into the ecosystem, including storm runoff that contains nonpoint source pollution.

“These results have management implications, as the effects of invasive mussels on the biogeochemical functioning in the Great Lakes region and elsewhere can alter system bioenergetics and promote harmful algal blooms,” Steinman said.