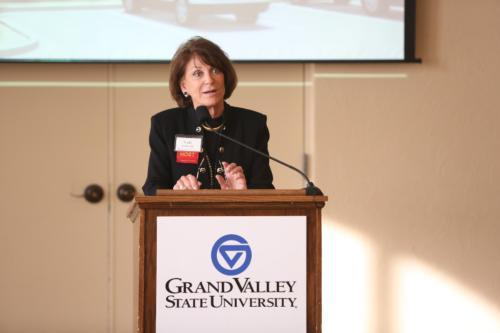 Victoria Verplank, a longtime supporter of Grand Valley State University’s Annis Water Resources Institute, died May 1 at the age of 69.

Verplank was an active committee member in the campaign for the Lake Michigan Center at AWRI, and most recently served on the campaign committee for the institute’s new Robert B. Annis Field Station, which opened and was formally dedicated in 2013.

“Vicki’s longtime commitment to Grand Valley will continue to impact students for generations to come. She was a generous supporter and a special member of the Grand Valley family. We will miss her,” said President Thomas J. Haas.

In addition to her campaign work for AWRI, Verplank served as a director on the Grand Valley University Foundation board, and served on the membership committee for the foundation.

“She was a wonderful woman, a tremendous supporter of Grand Valley and the Annis Water Resources Institute, and put her passion in action when it came to water quality issues in Spring Lake, the Grand River, and Lake Michigan,” said AWRI director Alan Steinman. “She will be sorely missed by people in West Michigan, not the least of which by the staff and faculty here at AWRI. We extend our condolences to the entire Verplank family.”

More information can be found online at  http://www.vbkfuneralhome.com/obituaries/Victoria-Verplank/#!/Obituary.