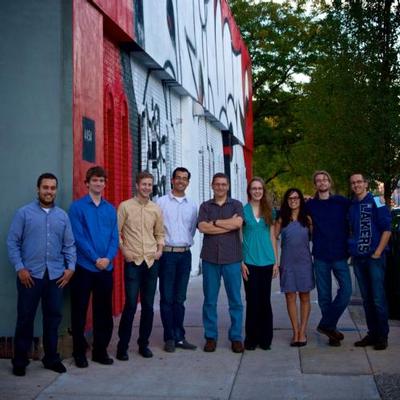 Grand Valley’s New Music Ensemble will perform a fall concert Friday, November 8, from 8-9:30 p.m. in the Dance Studio, 1600 Performing Arts Center, Allendale Campus. It is open to the public with free admission.

Founded in 2006 by its director Bill Ryan, the ensemble has been profiled in numerous national publications including the New York Times and Billboard Magazine, and featured on NPR’s Weekend Edition, All Things Considered, and WNYC’s Radiolab. They have performed at Carnegie Hall, at New Music Detroit’s Strange Beautiful Music marathon, and at Chicago’s Millennium Park.

The ensemble has released three critically acclaimed recordings named to best release lists by the New York Times, LA Weekly, and many others. A track from their second CD, “In C Remixed,” was heard on MTV’s hit series “Teen Wolf.” Excerpts from their first CD, “Steve Reich’s, Music for 18 Musicians,” were used as the soundtrack to Michael Langan’s award winning film “Choros,” and was also named one of the top five classical recordings of the decade by WNYC’s John Schaefer, as well as being named the No. 1 classical recording of the decade in the WNYC Soundcheck listener poll.

The highlight of the concert will be the world premiere of “Wide Open Spaces” by Armando Bayolo, a composer and conductor based in Washington D.C. “Our ensemble commissioned him for a work written in response to our national parks system,” said Ryan. Also on the program is a new work for flute and electronics by student member Ashley Stanley, three “In C” remixes from their 2009 CD, and a work for ensemble and electronics by Chicago Symphony composer-in-residence Anna Clyne. The concert will close with Steve Reich’s Pulitzer Prize-winning composition “Double Sextet.”

Thanks to a Technology Enhancement Grant from Grand Valley’s Faculty Teaching Learning Center, Ryan was able to purchase iPads for the seven ensemble members, plus wireless foot pedals and stands allowing for hands-free page turning of the sheet music.

“By using their Bluetooth wireless pedals they can now turn pages with their feet,” said Ryan. “Plus it has a smaller profile than a music stand, so we see more of the performer, and their sound is not blocked by the stand. We also won’t ever hear a person turning pages as we often do when the music is very soft.” Ryan said using the iPads also allows him to distribute the music electronically, and the ensemble members can make their own annotations right on their part during rehearsals.

For more information, call (616) 331-3484, or visit the ensemble website at www.newmusicensemble.org