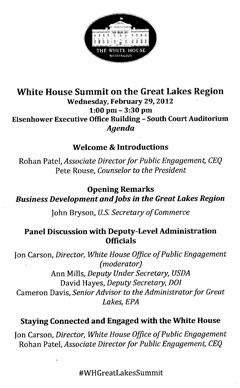 “It was an informative session but it did not address the issues from a scientific perspective, presumably by design,” Steinman said. “Nonetheless, it was useful to hear the Administration’s position on the Great Lakes, and their explicit support and appreciation for all the good work that is taking place in our region.”

Administration officials who spoke at the summit included Counselor to the President Pete Rouse, Secretary of Commerce John Bryson, Deputy Secretary of the Interior David Hayes and USDA Deputy Undersecretary for Natural Resources and Environment Ann Mills. The event focused on discussing the importance of community leadership in restoration of the Great Lakes.

Other topics the experts covered included business development, invasive species and nutrients in the lakes.

The White House issued a statement that said the summit “was another important step in advancing the partnership between the Administration and the dynamic community of leaders that has fostered success for the Great Lakes Restoration Initiative and its goal of a healthy environment and thriving economy for all Americans.”