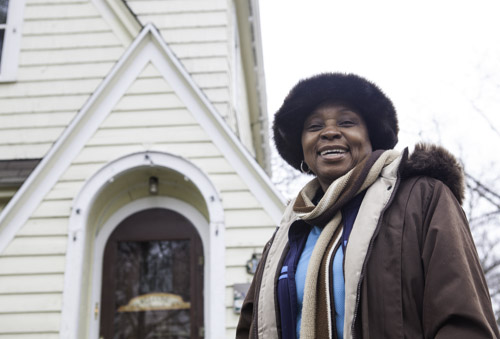 Ludie Weddle is a Host Neighbor for her block on Paris Avenue in the Dickinson School neighborhood.

Ludie Weddle walks along the streets of her neighborhood on Grand Rapids southeast side, encouraged by the changes she sees.

"It's cleaner, the neighbors know each other better and look after each other," said Weddle. "The children at the elementary school are getting free tutoring after school."

Weddle has lived in what's known as the Dickinson School neighborhood for 35 years. The area covers 36 blocks between Hall and Griggs streets and Jefferson and Union avenues. About 2,000 residents live in the area — 30 percent are living below the poverty level, 66 percent are single parents and 75 percent of the children at Dickinson Elementary qualify for the state's free lunch program.

Despite those statistics, positive changes have been made in the neighborhood since a grassroots initiative called Seeds of Promise began in 2005. Dozens of volunteers from area businesses and organizations have come along side Seeds of Promise, including students, faculty and staff from a broad spectrum of departments at Grand Valley.

The philosophy behind the initiative is to empower residents to make their own decisions to improve their quality of life.

"Empowering people is the only way to be successful," said Ron Jimmerson, president and co-founder of Seeds of Promise. "It's a bottom-up concept. The people of the neighborhood come up with their own strategies to direct their destiny."

Norman Christopher, executive director of the Sustainable Community Development Initiative at Grand Valley, has been on the board of Seeds of Promise since the beginning.

"This started as a youth initiative with area churches. That was successful for a time. It then transformed into a grassroots community development initiative with a focus on being sustainable," said Christopher. "In fact, Seeds of Promise is designed so that I, along with the other board members, will soon be out of a job."

Christopher said residents are being trained as host neighbors, leaders who direct initiatives on their blocks and will eventually take over as the board members of Seeds of Promise. The W. K. Kellogg Foundation provided a $300,000, three-year grant to fund training for 40 host neighbors.

Twenty-six host neighbors have already been trained in areas like computer literacy, how to form community block parties, how to communicate with neighbors and how to find resources, said Christopher. They are leaders who are growing to govern themselves in their own affairs.

Weddle, a retired registered dietician, is the host neighbor for her block on Paris Avenue. "We've held neighborhood clean-ups and community block parties to get to know the families and children in the area. We are communicating better. And those are just the little things," said Weddle. "One big thing we did was stop the expansion of a liquor store because we recognize that a liquor store is not in the best interest of the community, and we have learned how to fight for our rights."

The host neighbors are also being trained to lead impact teams, formed to address five areas identified by the residents as important: job creation, education, health and wellness, safety, and housing and community improvement.

Ann Sheehan, assistant dean for practice in Grand Valley's Kirkhof College of Nursing, serves as the current chair of the Seeds of Promise Health, Wellness and Nutrition Impact Team. Host Neighbor Robert Muhammad is being trained to take Sheehan's place.

Sheehan said her team's first step was to conduct a survey to identify the needs of the community before developing a plan or program. The team collected the survey results in person over several weeks to align with the Seeds of Promise mission of deep listening to the community members.

The target population of the community was 808 households; 115 surveys were completed, representing 14 percent of the population in the Seeds of Promise area.

"Residents said one of their biggest concerns is health literacy; they need help understanding information they receive from their health care provider," said Sheehan. "We asked residents to identify the neighborhoods worst health problems and topping the list was the use of tobacco, drugs and alcohol."

Sheehan said residents were asked why they might not get health care and the main reason stated was lack of insurance and fear of the cost. The survey also asked residents what they think affects the quality of health care in the community the most. Sheehan said the No. 1 answer was the inability to read and write.

A neighborhood conversation night was held in January to discover what is needed to help create a culture of health and wellness in the community.

"This grassroots approach to change is something that will really be effective long term for the neighborhood, more than just providing free check-ups, clinics or literature," said Sheehan.

She described the university's involvement with Seeds of Promise as the epitome of service learning for nursing students.

"Health care is moving out to the community. Its not about being in a hospital anymore, but translating what happened in the hospital to the community to help people get healthy and stay healthy," said Sheehan. "Learning how to go in and assess a community and help them do things in a way that works best for the members of that community is the best way to learn."

Grand Valley is one of the endorsing partners of the Seeds Evening After-school Program, which is part of the Education Impact Team. Grand Valley education students serve as tutors during an entire semester.

"Once a week, Grand Valley students are paired with a student from Dickinson for tutoring with homework," said Brian G. Johnson, affiliate professor of education. "It's a great opportunity for our students to get into the schools and give one-on-one help that is so crucial in early learning."

Jessica Theis, a public relations major at Grand Valley, currently serves as a marketing and communications liaison for Seeds of Promise and also develops the annual report.

Eric Foster, community governance coach and project manager with Seeds of Promise, said partners like Grand Valley have "embraced the vision of how to do, not what to do."

"Grand Valley has a wonderful reputation of authentic community engagement and working in an equitable fashion with the residents," said Foster. "Grand Valley is one of the best practitioners of engagement with diverse communities and brings a philosophy of working at an equal level with people who are not experts, bringing patience and understanding with that."

Seeds of Promise, a nonprofit organization, has more than 50 endorsing partners helping residents with employment, economic development and the environment. Once the neighbors are ready to serve as board members, the current members will step aside and become advisors.

"Its important to note that this program is not faith-based, it is faith-directed," said Jimmerson. "That is a very important distinction I want to make. The idea for Seeds of Promise came from God; He has opened up many doors for us. It is great to see resident leaders of different faiths and backgrounds coming together in love, giving to a community with their time and talent." 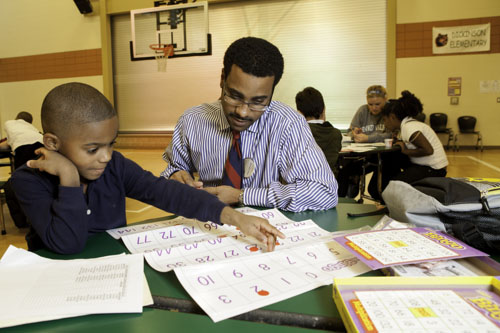 
Page last modified May 20, 2014
Report a problem with this page