Refining the art of the arts

As the university’s arts programs have grown, so has the demand for expanded, flexible, multidisciplinary performance spaces and the resources needed to prepare students for regional and national stages.

The newly renovated and expanded Thomas J. and Marcia J. Haas Center for Performing Arts reopened its doors to the Grand Valley community in August. The Haas Center will better accommodate student rehearsals, experimental projects, and the more than 10,000 patrons who attend the approximately 250 music, theater and dance performances that occur each academic year.

Danny Phipps, chair of the Music, Theatre, and Dance Department, said that the center represents a commitment by Grand Valley to offer the best in the performing arts to the university community and beyond.

“For the first time since the founding of Grand Valley, performing arts faculty and students can work, study and learn together in one building,” said Phipps. “The center is a place where aspiring students can come together for study in the performing arts while making connections with the faculty artists who write, compose, choreograph, direct, design and perform in music, theater and dance.”

The center was built in 1971, and houses Louis Armstrong Theatre, Grand Valley’s Art Gallery, and academic programs in music, music education, theater and dance. The facility is also used by numerous student vocal ensembles and the 220-member Laker Marching Band.

Thinking outside the (black) box

The Keller Theatre will provide theater students, in particular, and faculty members with opportunities to tackle new types of productions they couldn’t accomplish in the past.

“We have tended to stray away from two-to-four character plays because we have so many students who need roles, so we did large, ensemble plays,” said Roger Ellis, professor of theater. “This space will easily enable us to do smaller, possibly even more frequent productions.”

A black box theater is an indoor performance space with plain black walls and a level floor, typically designed to provide flexibility in stage configuration and audience seating. The Keller Black Box Theatre is designed to seat up to 150 people, depending on the performance.

Lindsey Normington, a senior communications major with a minor in theater, said she is excited to perform in the more intimate setting.

“Simultaneously, there’s less you can get away with as an actor and more you can share when you have a physical closeness with your audience,” said Normington, from Rockford. “This fosters a unique and intimate relationship between a cast and an audience that is as challenging as it is rewarding.”

Of course, not all theater magic happens on the stage. Jim Bell, associate professor of theater and Grand Valley Shakespeare Festival managing director, said the new theater and support spaces provide a “new sandbox to play in” for students who are not focused on acting or directing.

“There will be more design-focused students who want to work with sets, lighting, costumes and sound design,” Bell said. “Students studying in these areas will now look at our renovated facility and see those new kinds of opportunities. Theater is now much more visible to the university and we’re excited to show potential students our resources and facilities.”

Sara Gochenour, a senior theater major, said that learning how to direct and perform in a smaller, more flexible space can give students an advantage in their post-graduation careers.

“The center is a place where aspiring students can come together for study in the performing arts while making connections with the faculty artists who write, compose, choreograph, direct, design and perform.” — Danny Phipps, chair of Music, Theatre and Dance Department

“One of the best assets to have as an actor is the ability to adapt to what you are given,” said Gochenour, a native of Mount Pleasant. “Many times, smaller companies or touring shows perform in smaller spaces. Just last year while I was performing with Bard To Go, we had to adapt to many different performance spaces, including black box theaters, proscenium stages and even high school classrooms.”

Karen Libman, professor of theater, said the Keller Theatre and new rehearsal spaces will create more opportunities to invite guest performers, including alumni and industry professionals, to campus to work with students. 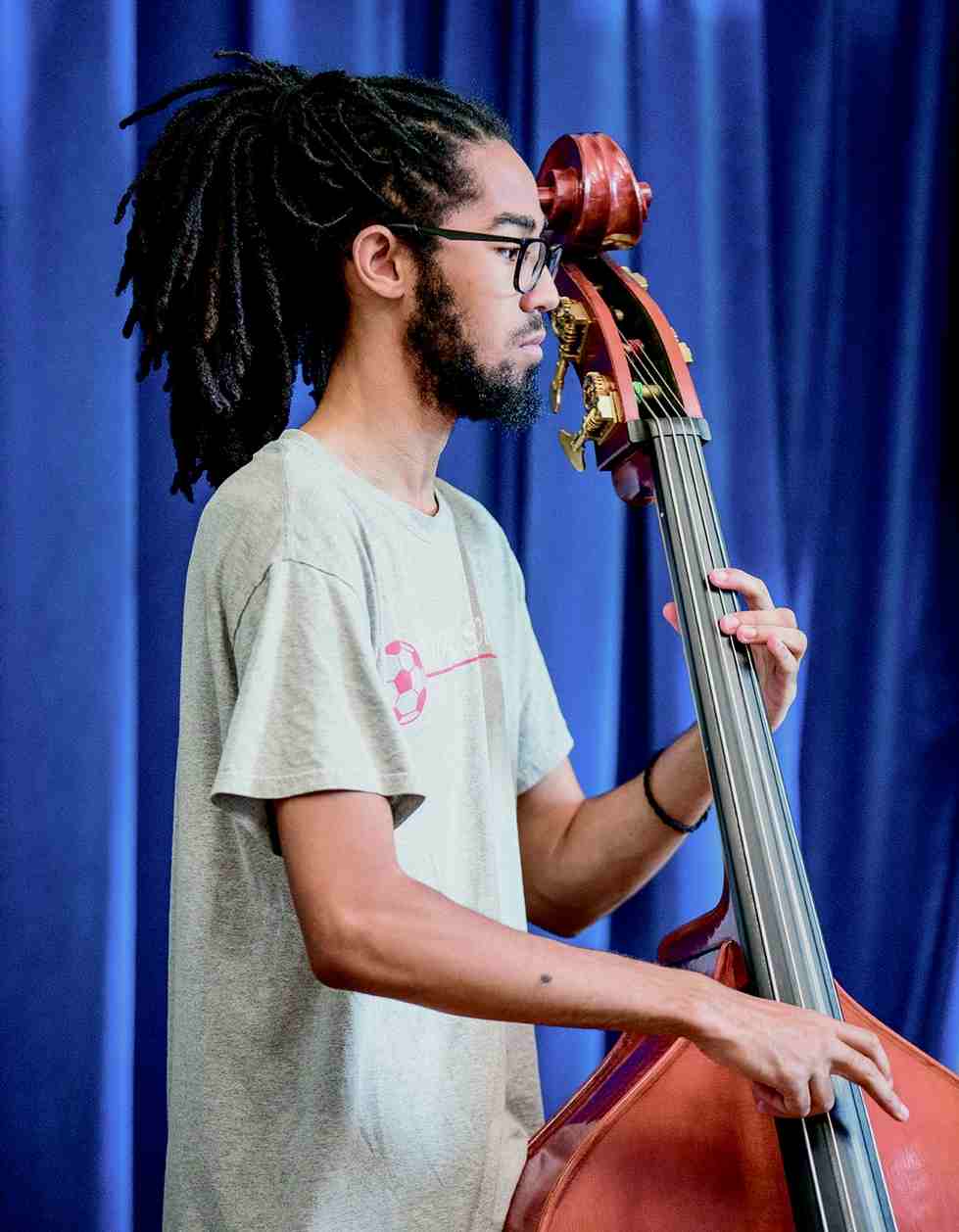 The theater program will be able to expand its community outreach programs, such as the Will Power Camp, which brings young campers to the Allendale Campus to learn about theater and storytelling concepts using the works of William Shakespeare.

The Keller Theatre will not only benefit theater students, but will also provide a platform for collaborative performances between music, dance and vocal students as well.

“This black box theater will be a place where pure theater can be discovered, a musical can be performed, or students and faculty from across the Music, Theatre, and Dance Department can construct the most experimental presentations,” said Phipps.

“Collaboration intensifies knowledge and with the opening of the Linn Maxwell Keller Black Box Theatre, nearly limitless possibilities for such collaborative exchange is now possible.”

The Keller Theatre is named for Linn Maxwell Keller in recognition of a gift from the Fred Keller family.

During weekly rehearsals for music ensembles, it was common to watch students carry instruments and equipment to and from one of two ensemble rehearsal rooms. The transportation process subtracted from crucial rehearsal time.

With four new ensemble rooms in the Haas Center, students and faculty will gain rehearsal time as each of the three ensembles have designated rehearsal rooms. The fourth ensemble room is outfitted for percussion rehearsals.

Each room is acoustically customized to fit various performance styles, and includes faculty workstations so ensemble directors are more accessible to students. 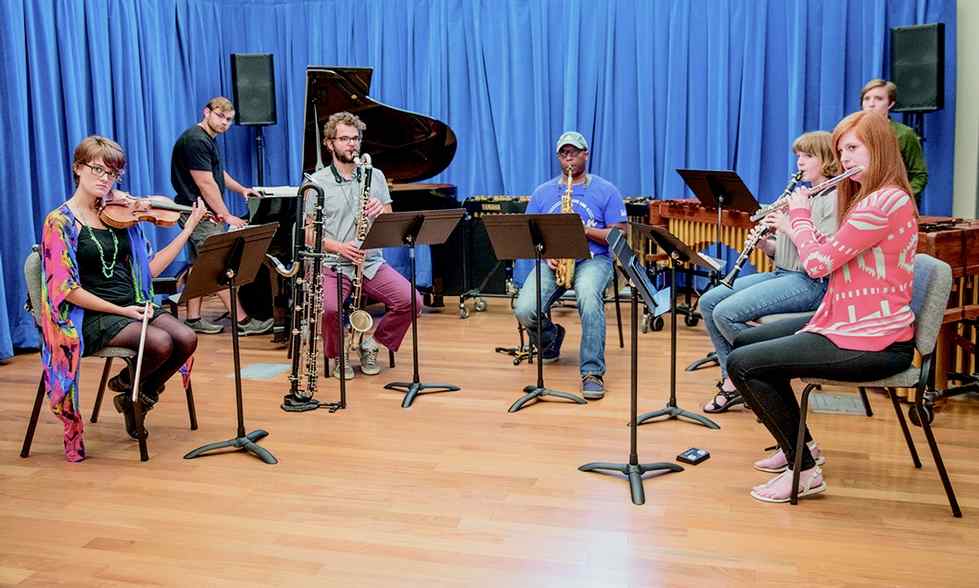 Members of the New Music Ensemble rehearse in one of the four ensemble rooms in the Haas Center.

“We demand a lot from our students, and these sprung floors help them meet those demands in the best possible physical environment for their safety and well-being,” said Carrie Morris, associate professor of modern dance and GVSU Dance Company director. She added that the floors are similar to those used by the New York City Ballet and American Ballet Theatre.

A display of artwork unlike any other at Grand Valley exists within the Haas Center.

Located in the main lobby is what is known as a “salon style” display, which includes more than 20 pieces of art stacked two-to-four layers high. The display stretches roughly 44 feet wide and 15 feet high.

“Our installation reflects the development of our permanent collection of the past 20 years at Grand Valley, including paintings, prints, photography, folk art and sculptures,” said Henry Matthews, Art Gallery director. “We have included works by students, alumni, art faculty and gifts from European and American collectors.”

Many of the chosen lobby pieces are samples of much larger collections found in Grand Valley’s permanent art collection of more than 15,000 pieces. For example, two works by longtime university supporter and artist Cyril Lixenberg are included in the display, yet Grand Valley’s Lixenberg collection includes more than 500 pieces.

The pieces of art featured in the lobby’s display are only a handful of the more than 200 pieces scattered throughout the building that were carefully selected to reflect the specific themes of music, theater and dance. 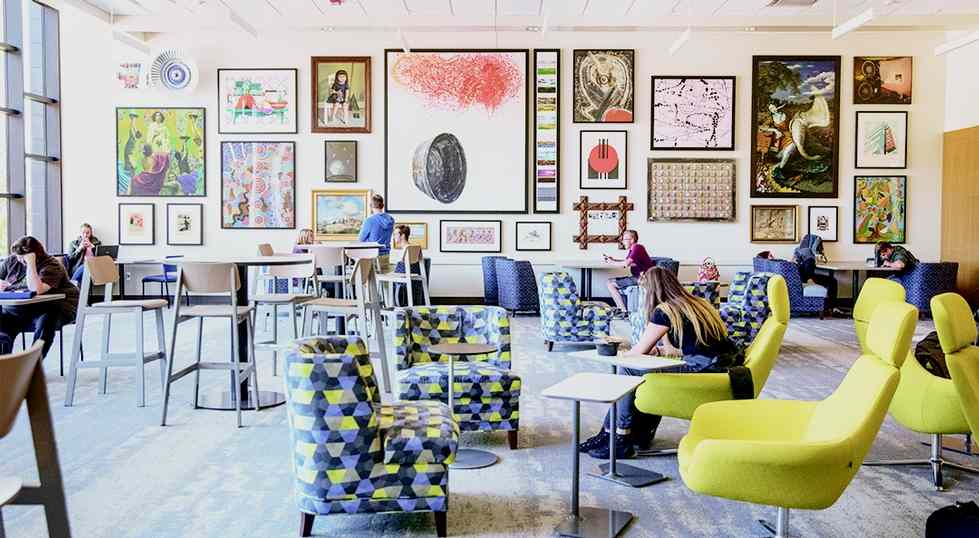 Center namesake pays homage to a love of performing arts

The Haas Center is named in honor of Tom and Marcia Haas, recognizing their creation of a generous endowment for the performing arts which is also in their name.

The endowment will provide a margin of excellence in Grand Valley’s performing arts programs by supporting enrichment activities for students studying or participating in any of the performing arts — dance, instrumental music, athletic bands, opera theater, vocal music, and theater. These funds will provide students with opportunities to explore and develop their talents through competitions, talent showcases, master classes, and summer programs around the world. 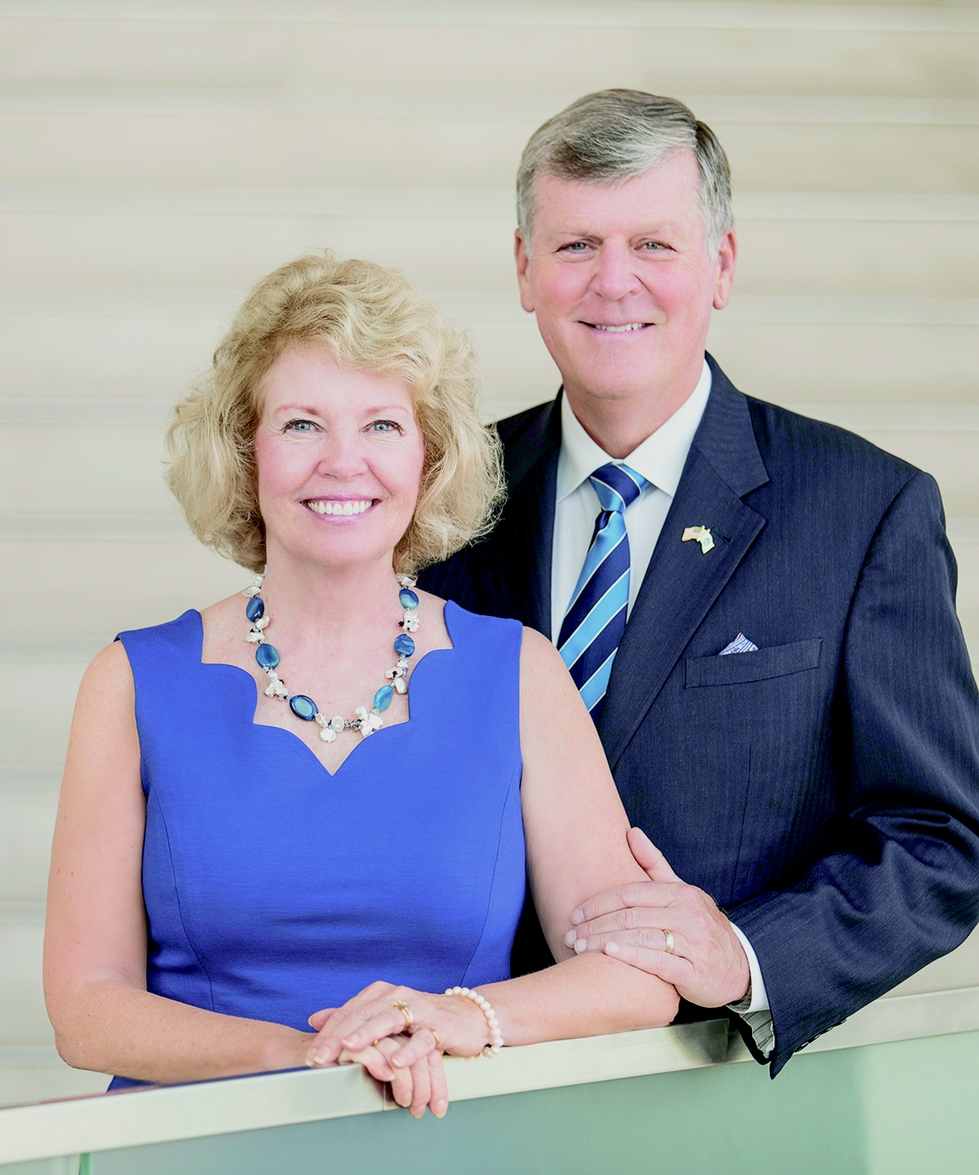 Linn Maxwell Keller (1943-2016) was a dedicated professional singer who performed in 28 countries, a scholar, a woman of deep faith, and an inspiring mother and life partner.

Linn was born in Indiana, the only child of two musicians. Her mother, Adris, was an accomplished pianist and her father, Col. Roy Maxwell, sang in choruses wherever his military career took the family. Linn spent much of her formative years in Bethesda, Maryland, and then traveled the world as a professional vocalist, finally making her home in Grand Rapids, where she was a leader and avid supporter of the performing arts community.

Linn studied music performance at the University of Maryland and earned a master’s degree in music from Catholic University. As a mezzo soprano, Linn performed on many operatic and concert stages from the Essen Opera House in Germany to Puerto Rico and Carnegie Hall. Her one-woman cabaret shows were performed across the world, including in Edinburgh, Scotland, New York City, and a tour of Australia.

At the peak of her career as a professional vocalist, Linn married Fred Keller and became  the second mother to Christina, Susan, and Lorissa. As the children grew, she restarted her career, this time focusing on developing her acting and playwriting skills. She went on to write and develop numerous original shows, including the critically acclaimed “Hildegard of Bingen and the Living Light,” and “St. Hildegard, Trumpet of God,” turning both of them into movies. 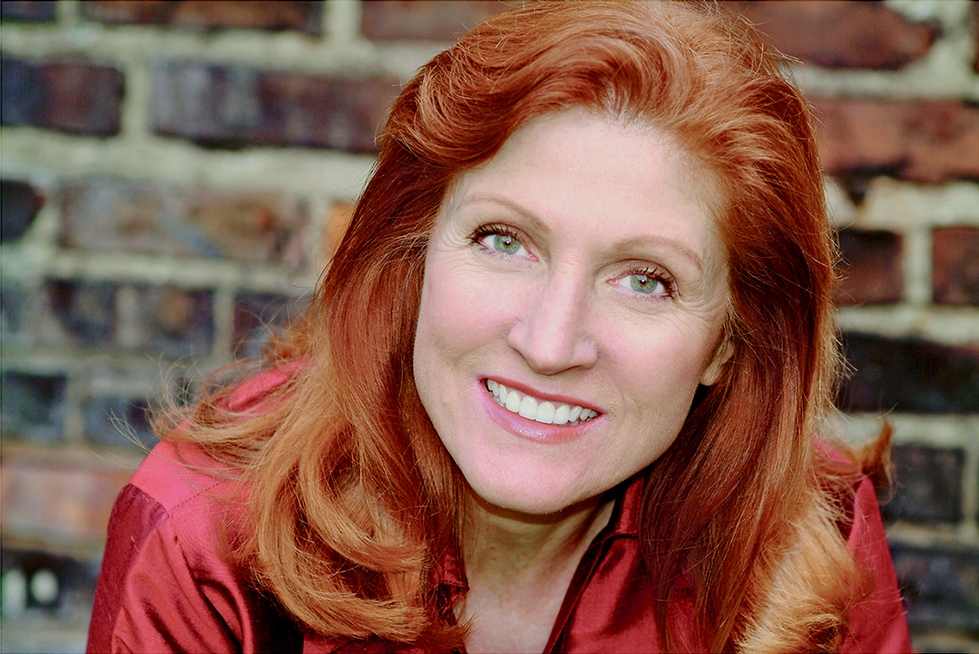 She was the founder and president of the Grand Rapids Bach Festival and served on several artistic boards. Among her many accolades, she was awarded the Joy in Singing Award and received the National Endowment for the Arts Solo Recitalist Grant.

To honor Linn’s deep love and commitment to excellence in vocal and stage performance, the Keller family established the Linn Maxwell Keller Professional Vocalist Experience Endowment to provide enrichment opportunities for committed vocal performance students and to encourage them in their professional career development. In appreciation for their generosity, Grand Valley named the Linn Maxwell Keller Black Box Theatre.