Picture this: it’s August 10, 1792 on the streets of Paris. People are yelling “Down with the king!” and “Off with his head!” while the National Guard and a mob of Parisians storm the Tuileries Palace to overthrow King Louis XVI. It’s an important day of the French Revolution.

Now picture this taking place in a classroom in Allendale, where students are the Parisians, weapons are substituted with balls of crunched-up paper, and protection from the enemy means long desks turned on their sides.

It is all part of European Civilization I and II, a yearlong sequence course for first-year students in the Frederik Meijer Honors College. The instructors, David Eick, associate professor of French, and Ellen Adams, assistant professor of art, are using Reacting to the Past (RTTP) as a way to teach their students.

RTTP is an interdisciplinary teaching method, or pedagogy, which involves complex games that are set in the past during periods such as the Renaissance, Enlightenment and French Revolution. The goal is to have students learn by taking on roles, informed by classic texts. They learn problem solving and communication skills in order to prevail in class scenarios that closely parallel historical events.

It was developed by history professor Mark Carnes at Barnard College in New York City in the late 1990s. Gretchen Galbraith, associate dean for the College of Liberal Arts and Sciences, brought it to Grand Valley in 2011. 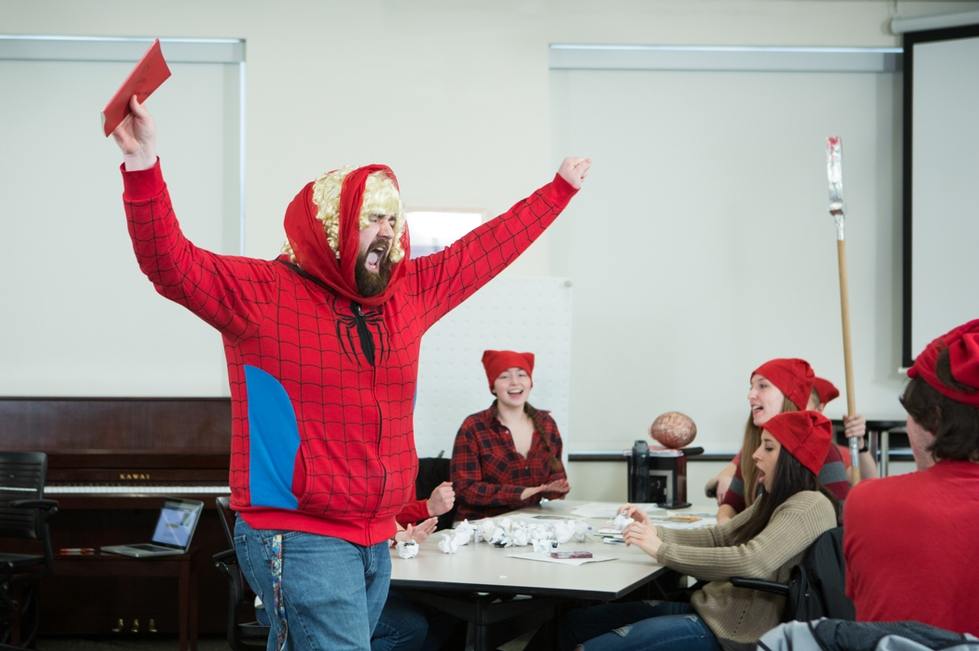 “Reacting takes an intrinsic part of student life and incorporates it into the classroom,” Galbraith said. “Students come to college to try out new identities and discover their sense of self, and that’s what Reacting is all about. They take on new roles, develop new skills and experience something new.”

Galbraith learned about RTTP while attending its annual institute at Barnard College, where professors from across the country come to learn and practice RTTP. Fred Antczak, dean of CLAS, encouraged her to attend.

“I walked into the first game and found people deeply engaged in the topic, some of them in period costume. It was terrifying,” Galbraith said. “I became intrigued and decided to give it a try at Grand Valley.”

The first game she initiated at Grand Valley was about the French Revolution. “It was a bit messy at first, but it had a great impact. I could tell students were learning in a different way and really talking about it,” she said.

Games are facilitated by game masters (professors) and each game session (class period) is led by students; they range from three to nine class periods. Each one includes a game book that outlines a historical vignette, and students are given a role sheet for their assigned historical figure that explains the character’s story, motivations and goals. More than 150 games have been written and are being used in classes across the country. A list can be found at here.

Although it’s not a requirement, many students get into character by making props and wearing costumes. In Eick and Adams’ class, some students made red caps, which were worn by revolutionaries at the fall of the Bastille during the French Revolution. 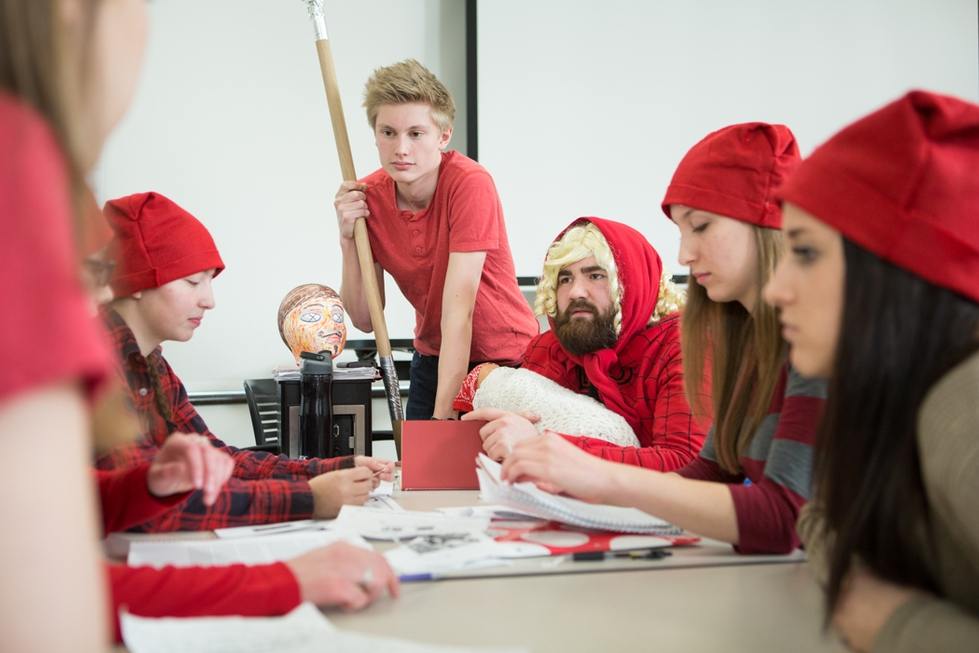 A group of students gather to discuss strategy during the French Revolution.

During Eick and Adams’ game, Micaela Cole, a political science major, was assigned to play Henri Baptiste Gregoire, a religious figure who was a leader of the Jacobins, a revolutionary political group of that time. She said she had a lot of objectives to complete because her character wanted to destroy the constitutional monarchy and create a republic.

“My main takeaway from the games was an appreciation for how messy history can be,” said Cole, from East Grand Rapids. “A lot of the time history can be dry, but with the games you’re learning without realizing it. I found myself doing a lot of research outside of class so I could apply it in class to win my victory objectives.”

Andrew Newton, an English major from Kent City, was assigned to play Madame Andalle, a member of the Parisian crowd. He said he wasn’t sure what to expect at the beginning of the academic year. “I was like, ‘Wait, we’re playing a game at school?’ But once we started playing I was able to see just how deeply you can learn things when you’re actually experiencing them and finding them out for yourself,’ he said.

Before the start of a game, professors lecture about the historical period to provide some context. At the end of the game, the professors will spend some time unpacking the game to discuss what went wrong and what went right.

Galbraith said RTTP is powerful because it’s interdisciplinary; students must write news articles, give speeches and collaborate with their classmates — all in character. At the end of each game, students write two papers: one that reflects on their experience and one that involves research on a topic that piqued their interest during a game. Eleven of Adam, Eick and Galbraith’s students presented their research papers at Student Scholars Day in April.

“Students have told us that they understand a historical moment better than they ever had in their experience of studying history,” Galbraith said. “Two years in a row, I’ve had two very shy women who I saw develop greater confidence over the year. In their reflective papers they talked about how they hated giving speeches, but had decided to work as speech buddies outside of class to become more effective public speakers. It was exciting to see the progress they made.”

Eick said he’s heard all positive feedback from his students about RTTP, except that some become emotionally invested in the game because they’re passionate about their character and want to win the game. “In those instances, I shift into coach mode and remind them that the game is about learning, not winning,” he said.

Katie Torkelson, ’15, majored in biology and minored in French and played games in two courses. Usually shy in new classes, Torkelson said she learned to step outside of her comfort zone in the Enlightenment game, which was written by Galbraith and Eick. The game takes place in a French salon and focuses on the politics of the intellectual movement and debate of the creation of the Encyclopédie. It has been used in history courses at four colleges and universities since it was created in 2012.

“I was assigned to be a woman who was an author and feminist. I would never stand up on a desk and give a passionate, five-minute speech off the bat, but that’s what my character did in real life, so that’s what I did. It pushed me to become a better speaker,” said Torkelson, from Grandville.

Some students have presented at professional conferences because they became so engaged with their game character or research topic they continued to pursue it. Torkelson, Caitlin McCullough and Scott St. Louis were the first undergraduates ever to present at the South Central Society for Eighteenth-Century Studies conference that took place in Alabama in February. 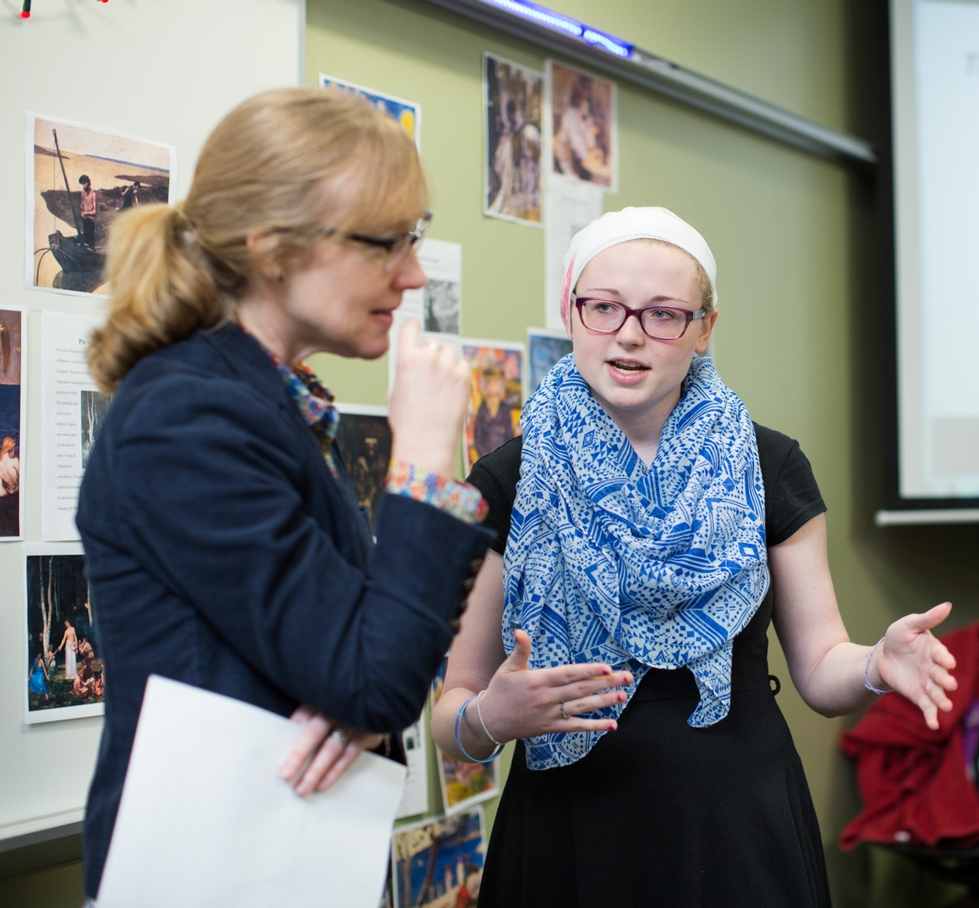 A student acts as Vincent van Gogh during the Art in Paris game, which debates principles of modernism vs. traditionalism of art in 1888. At left is Gretchen Galbraith, who brought RTTP to Grand Valley.

After playing female roles Madame Andalle and French novelist Madame Françoise de Graffigny during the Enlightenment game, Newton became interested in women from those time periods. “I actually got to read one of de Graffigny’s novels as part of my research,” he said. “It’s a very fascinating topic. During the Enlightenment, there was this double standard that existed. There was an increase in equality for a lot of people, but there was still this mental block that a lot of enlightened men had against women.”

While RTTP is also being applied in non-honors classes in the Classics and Modern Languages and Literatures departments, Galbraith hopes the pedagogy will be applied to other disciplines at Grand Valley in the future.

“Many people are adopting this method at other universities and not just in history classrooms,” said Galbraith. “For example, a scientist has used a National Science Foundation grant to create a series of games that examine the interaction between science and politics when it comes to issues like climate change and food policy.” 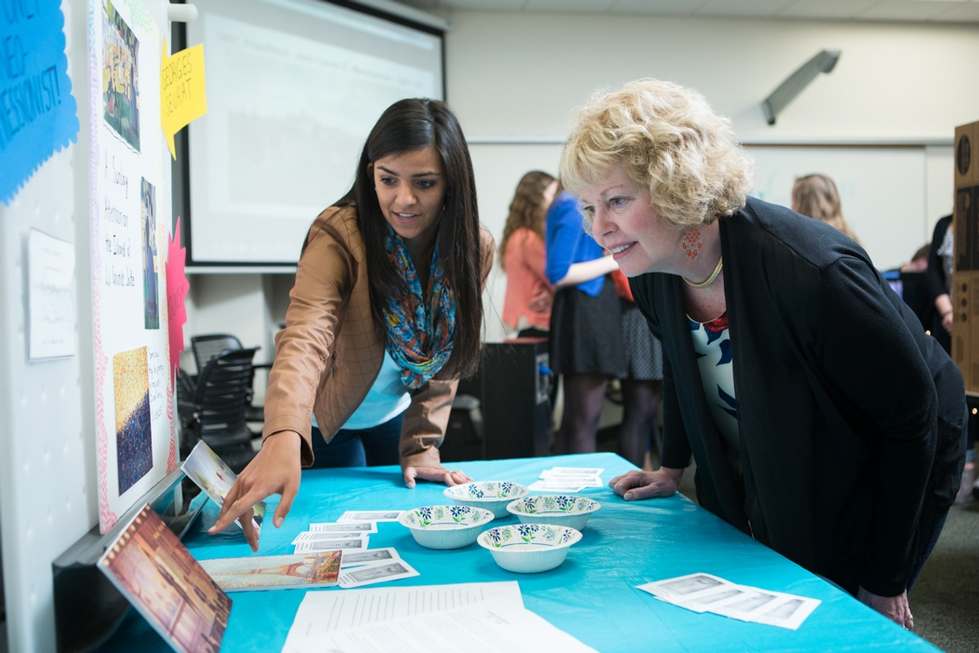 Rachel Shippy discusses art with Marcia Haas during the Art in Paris game.


Page last modified May 16, 2019
Report a problem with this page