Play with power, march with pride

During fall football season, the air around Grand Valley on game day is rich with the sounds of the powerful cadences of the Laker Marching Band drumline, and the ground quakes from the powerful heel-to-toe marching of the 200-plus member ensemble.

Leaving the Thomas J. and Marcia J. Center for Performing Arts, the band makes a brief stop at the Cook Carillon Tower to perform the Grand Valley fight song, “GVSU Victory,” before marching through the tailgating area to Lubbers Stadium.

There, they high-step their way across the field to form the letters G-V-S-U while the stadium booms with fan excitement from the band’s renditions of “Let’s Go Blue” and the “We are GV” salute.

John Martin, director of Athletic Bands, believes that collegiate sporting events are about creating a college atmosphere, and the Laker Marching Band (LMB) is an integral part of that experience. 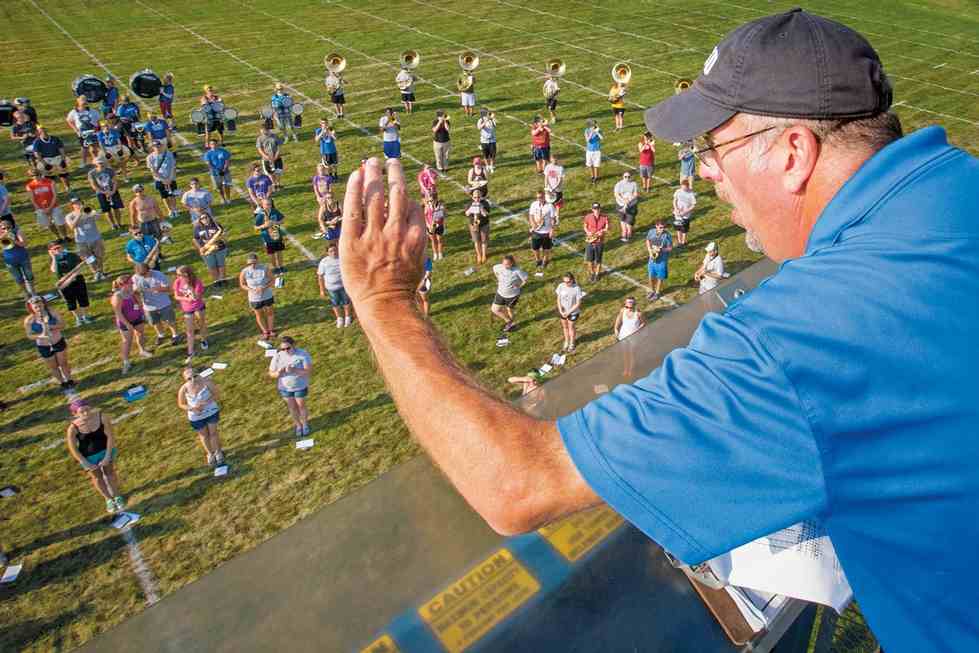 John Martin conducts the Laker Marching Band during a rehearsal on the Allendale Campus. (Bernadine Carey-Tucker)

“What says more about college football on a Saturday than the Laker Marching Band opening a tunnel for the team and firing up the crowd in Lubbers Stadium? We want to make sure the crowd knows we are here,” he said.

“The Pride of the Midwest” will mark its 40th anniversary season representing Grand Valley through pristine musicianship and showmanship this fall.

“We are on the same level of any other school in this nation because of our pageantry and the game day atmosphere the Laker Marching Band creates,” said Martin. “Our students are on the Division I marching band level, no doubt about it.”

The LMB started in 1977 under the direction of William Root, one of Michigan’s leading music educators at the time. During his 10-year career at Grand Valley, Root composed “GVSU Victory.”

The first LMB class had an enrollment of fewer than 100 members; today, the band is composed of more than 200 students, ranging from first-year students to seniors from more than 50 academic disciplines.

Sarah Eldred, who was a LMB member from 1996-1999, said membership provides a sense of community and familial bonds for students.

“The biggest successes of the program are the continuation of music for so many who have played in high school, and the opportunities to create lifelong friendships that develop during time in the LMB,” said Eldred, director of bands for Oakridge Public Schools in Muskegon. “Being a member of the LMB is for life, not just for a year or two.” 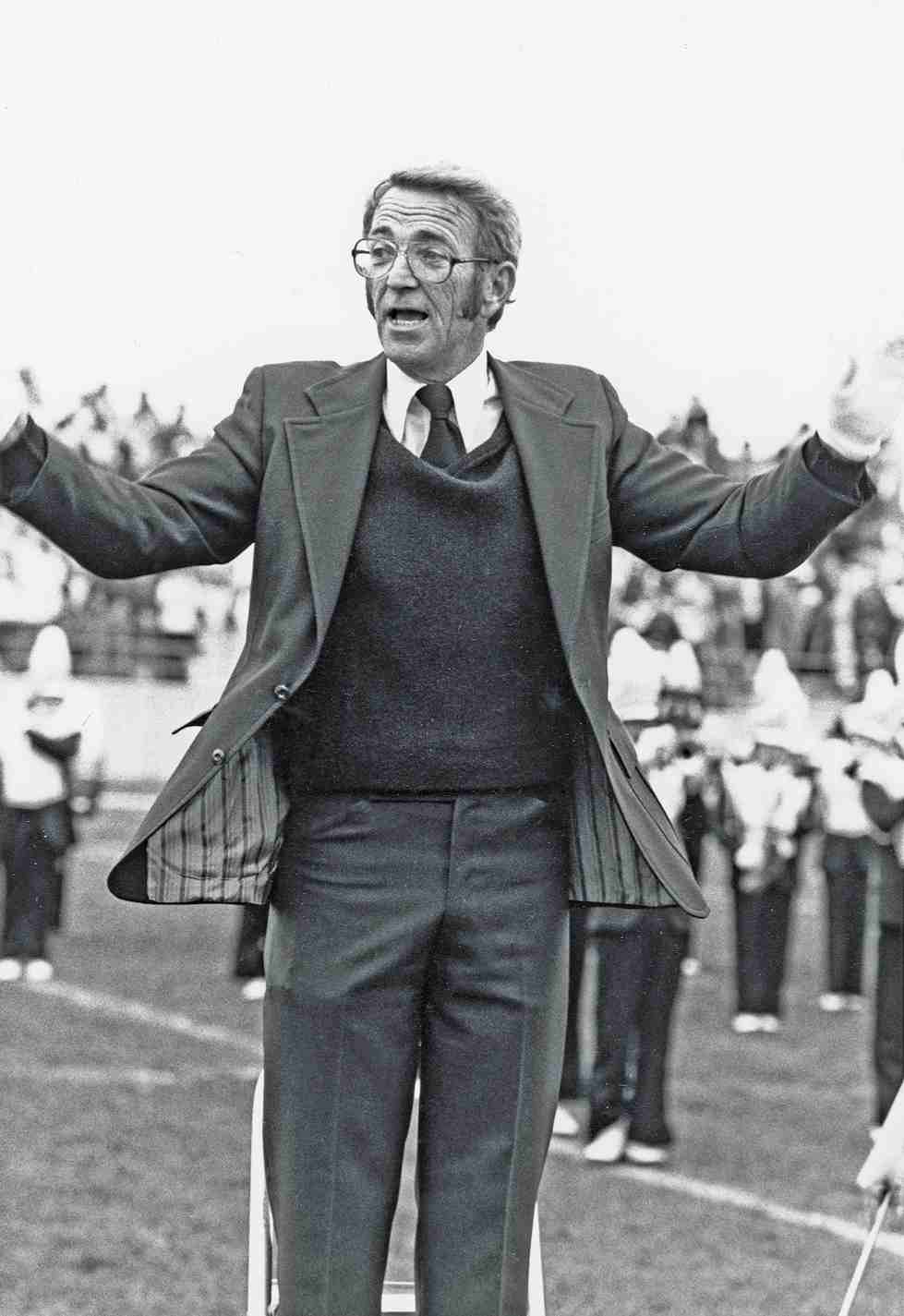 Martin attributes much of the growing success of the LMB to the investments students make on the logistical side of the ensemble.

One way students take ownership of the marching band is by serving as the governing body of the ensemble through the Laker Marching Band Council (LMBC). Formed in 2015 as a student organization, the council is composed of active band members, and students who are passionate about the ensemble, but not band members. 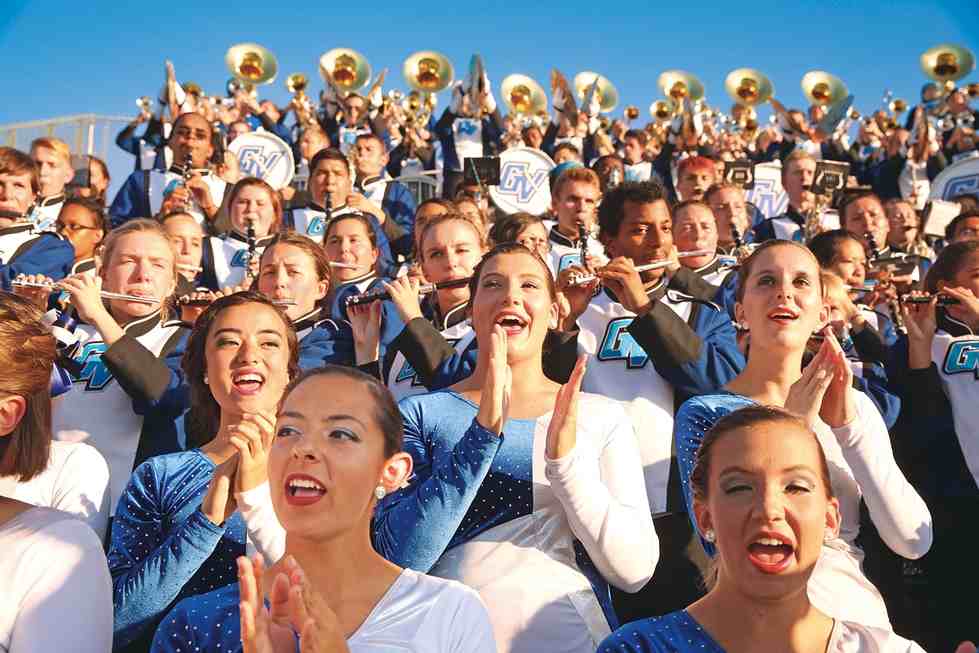 Michael Stickroe, a senior majoring in finance and business economics, is entering his fourth year as LMBC president and said it succeeds because all band members believe in a single philosophy: own it.

“Own yourself by knowing your charts, music and marching fundamentals and own your section by helping at any possible moment and offering guidance to those in need,” Stickroe said. “If you are doing the first two, you are essentially ‘owning the band.’

“This philosophy makes each and every student feel like their part is important and really gives the students the sense that this is their band and their success will define the current and future success of the band.”

Voice of the LMB

“Ladies and gentlemen, please welcome, the Pride of the Midwest, the Laker Marching Band!” is commonly heard bellowing throughout Lubbers Stadium during home football games.

The voice proclaiming the arrival of the LMB belongs to Tom Yackish. Yackish began teaching at Grand Valley in 1985 and played a major role in the creation of the university’s engineering program. He developed an affinity for building audio equipment and voluntarily recording musical ensembles on campus along with his students.

In 1995, members of the LMB were performing at Van Andel Arena during an exhibition basketball game between Grand Valley and Michigan State University. Barry Martin, LMB director at the time and current professor of music, needed an announcer to introduce the ensemble. Yackish, who was recording the band at the arena, jumped in. Since that day, he has been the voice of the LMB.

“I just love it. I love when the Lubbers Stadium crowd goes nuts when I announce, ‘The Pride of the Midwest,’” said Yackish, who retired from Grand Valley in 2003. “I want to get them applauding and cheering. I try to put an enthusiastic inflection in the announcements so I can get people fired up.”

Yackish is also a noteworthy individual to the LMB because of his contributions toward the purchase of the band’s rehearsal tower positioned behind the Haas Center for Performing Arts. 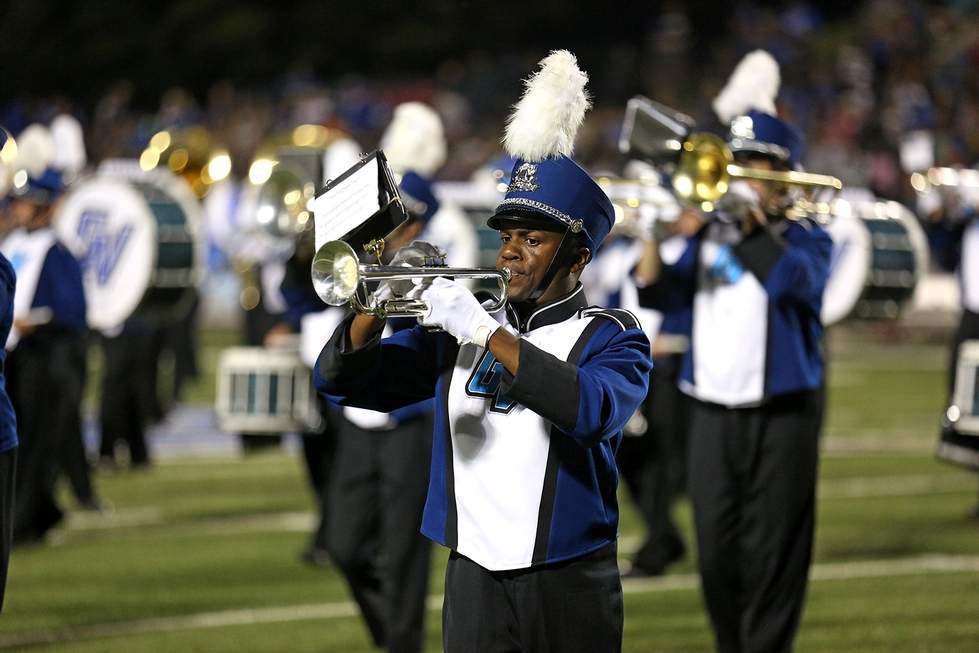 On the front porch

The LMB strives to involve the community in its musicianship by not only performing at football games, but also during other athletics events via pep band and the annual Bandorama concert. Bandorama invites the West Michigan community to the Allendale Campus where the band performs selections from their football season shows in the Kelly Family Sports Center. 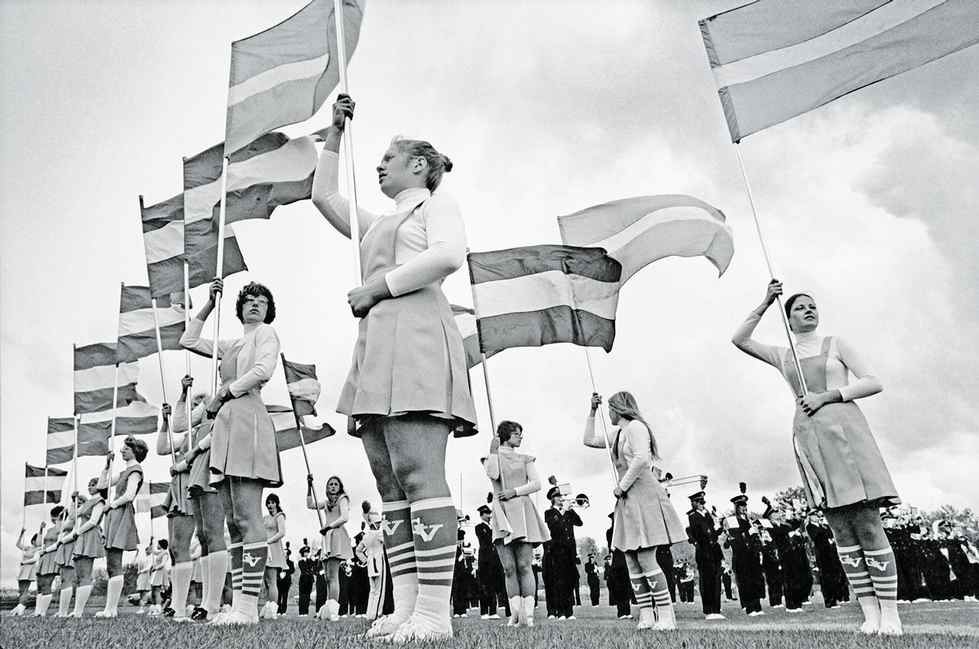 In addition to visiting area music programs throughout each year, the LMB also gives Michigan high school students a taste of what life is like performing in a collegiate marching band during High School Band Day. During this annual community outreach event, high school students spend a day practicing with the LMB before marching to Lubbers Stadium to perform at a home football game in front of thousands of people. Band Day is organized and facilitated by the Grand Valley chapter of the Kappa Kappa Psi national band fraternity.

The band has also grown a community of alumni, many of whom stay actively involved with the ensemble, either through financial support, or by performing annually at halftime during Homecoming.

“Community connection and outreach is the life blood of our program,” said Martin. “The Laker Marching Band is on the front porch of our great university, and we want the LMB to be one of the best ambassadors for Grand Valley.” 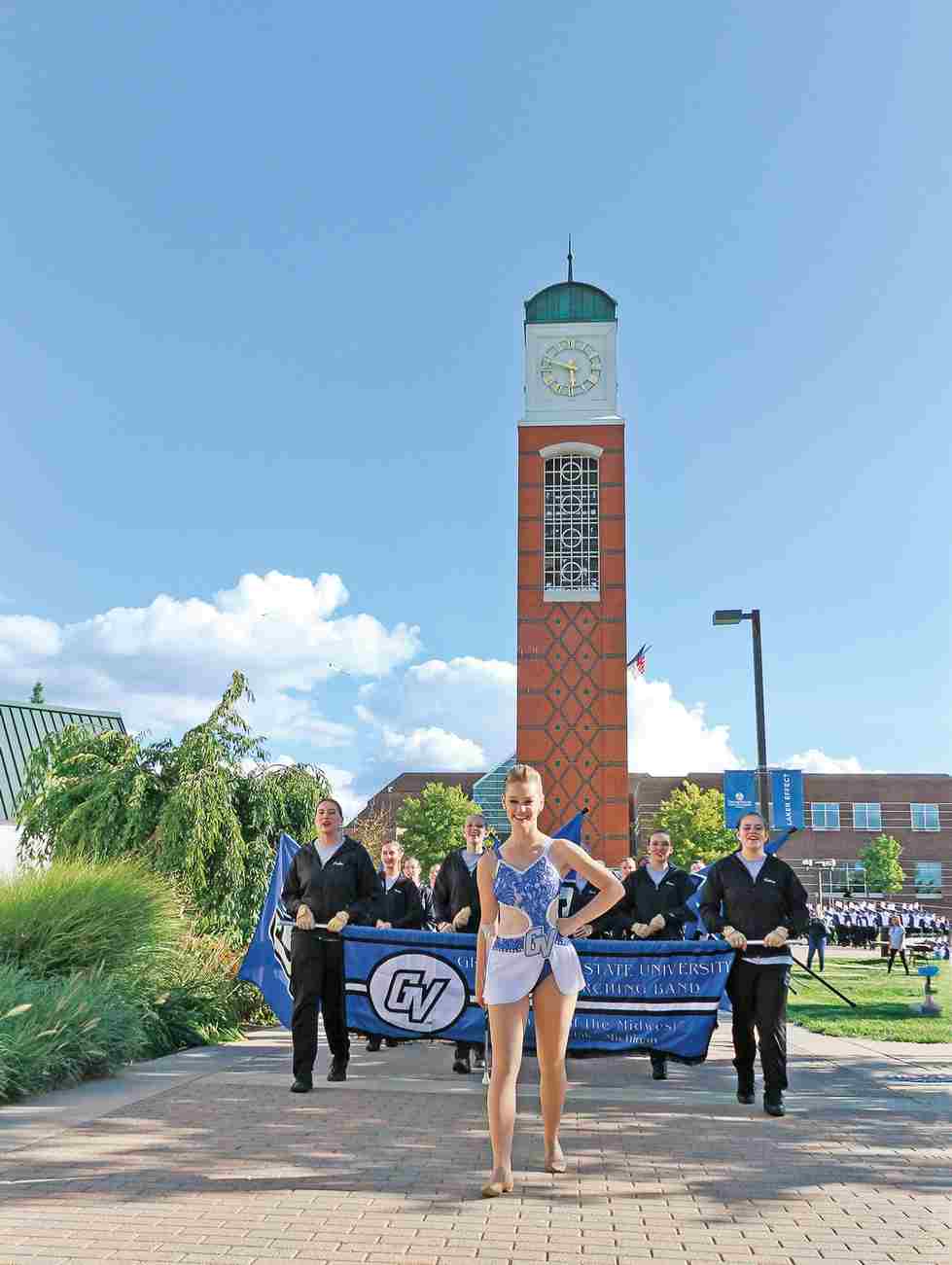