In West Michigan there exists a city comprised of a grand museum, an authentic Chinese theater, bountiful dining rooms, exotic rooftop patios and even a chapel on top of a mountain. The residents of this city are tiny mice dressed as nuns, wizards, soldiers, tourists, pilots, chefs, societal elites, film directors and museum curators.

If this city doesn’t sound familiar, that’s because it can’t be found on a map. The complex resides in the living room of Henry Matthews, director of Galleries and Collections at Grand Valley. 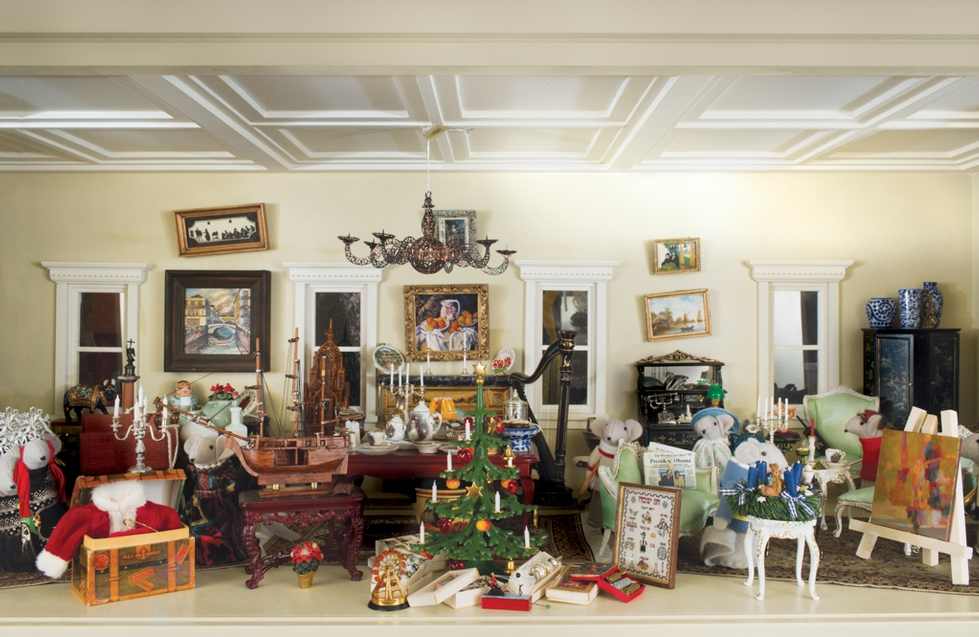 See below for answers to I Spy questions on page 36.

Matthews joined the niche culture of miniature collectors roughly 20 years ago. His complex currently houses hundreds of miniature items from all over the world and even garnered international attention in 2011 thanks to a feature story in "Miniature Collector Magazine."

Matthews recalled that there wasn’t one particular moment that piqued his interest in miniatures, but said it was spurred by a dollhouse from his daughter’s childhood.

“Amalia didn’t have much interest in it so we left it alone, but then I started collecting miniature things, like the items found in the dollhouse, and put them in a separate glass-covered library bookshelf,” Matthews said.

When that displaying method began spatially limiting Matthews’ newfound passion, he began designing the individual buildings of his complex. Thus far, it consists of seven structures resting on a 5- by 8-foot base.

The inspirations for Matthews’ designs primarily come from various historical landmarks and architecture he has encountered during his international travels. 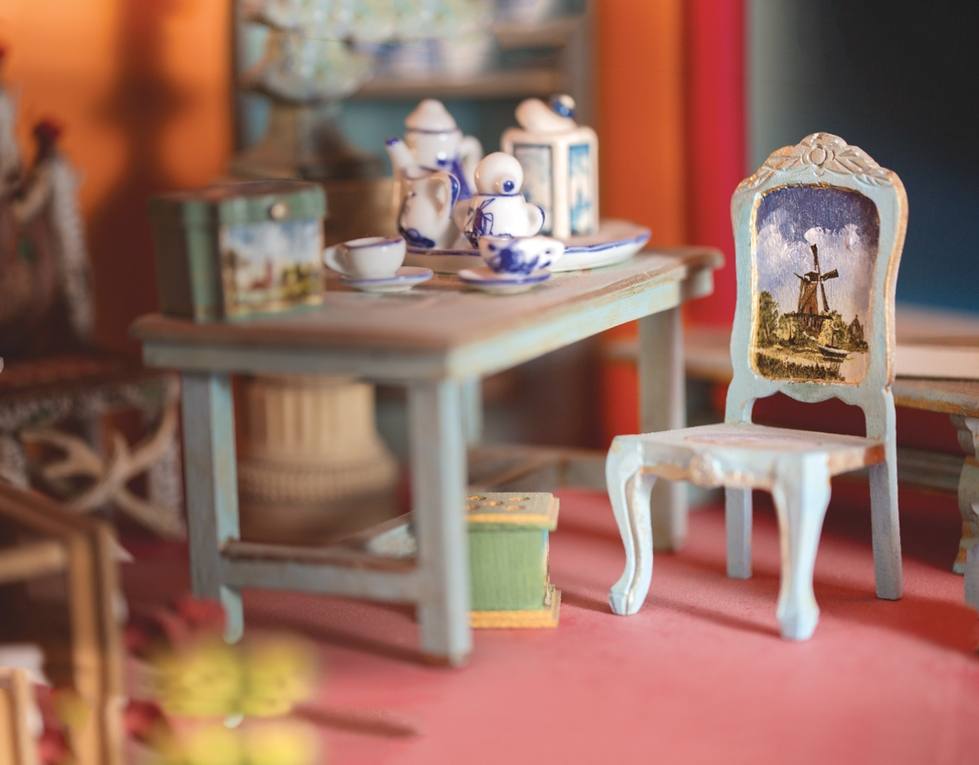 Pictured is a dining room set hand-painted by a Dutch artist in Amsterdam. The set is located in the Matthews’ three-story artist’s apartment.

“The family joke is that while his name is on the building, he has no control whatsoever about what goes inside it,” Matthews said. “The museum wing is essentially an excuse to buy just about anything I want and put it in there.”

Miniatures, ranging from dinosaur skeletons to a collection of European crowns, can be found in the Timoseum, but the centerpiece of this wing was given to Matthews as a gift.

In 2003, St. Petersburg celebrated its 300th anniversary. During that time, Matthews arranged an exhibition of works by Elona Van Gent, former Grand Valley art and design faculty member, in Peter the Great’s Museum. “As a thank you, she made me a mini cupola that now sits on top of my museum,” Matthews said. “This wing began with the cupola, and I built it down from there.” 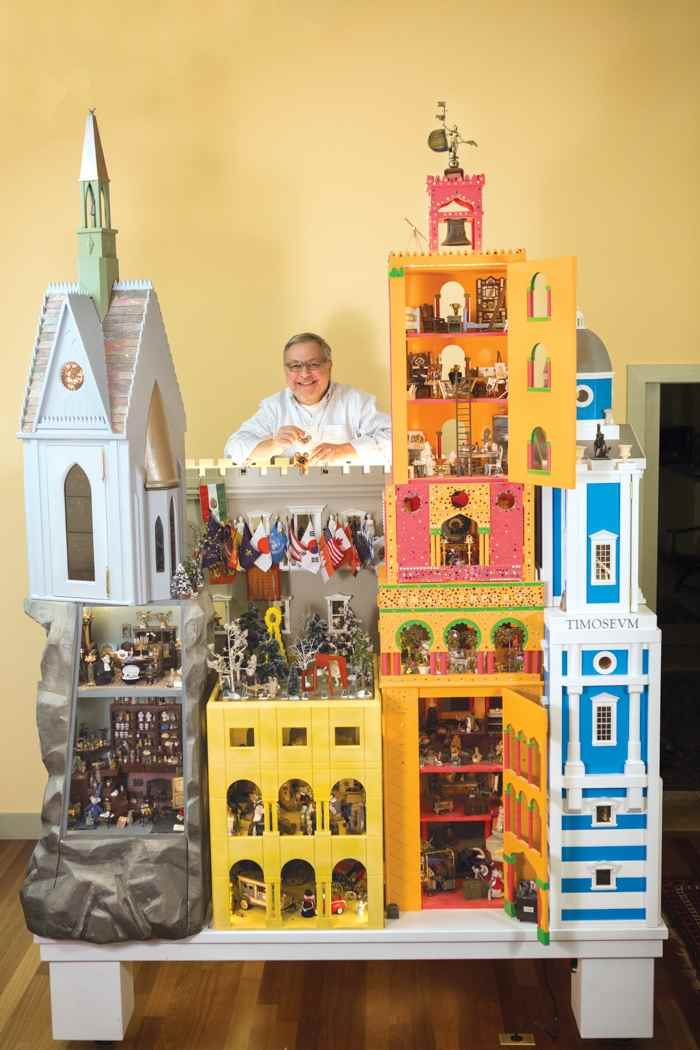 Henry Matthews stands on a ladder behind his collection of miniatures.

Connected to the museum is an 11-foot-high orange and pink diamond-studded tower inspired by Amalia’s study abroad experience through Grand Valley in Seville, Spain, as well as a family vacation to India.

“I named the tower ‘Amalienburg,’ which is German for ‘Amalia’s castle,’ after both my daughter and the famous Amalienburg hunting lodge on the grounds of Schloss Nymphenburg just outside of Munich,” Matthews said.

Sitting atop the tower is a weather vane that represents the Spirit of Seville, as well as an 1876 Centennial model of the Liberty Bell.

“I’m now looking for unique, one-of-a-kind pieces,” Matthews said. “As you get better at any hobby and learn more about it, you keep going to a higher level.”

Around the corner from Amalienburg sits a two-story chapel resting atop an alchemist’s apartment hidden within a rocky mountainside made of Styrofoam. The multi-denominational chapel is the home of a miniature Bible and Torah, both with full text.

The production in the theater is currently sold out as the seats are filled with the social elite of Matthews’ mouse collection. Matthews said mice are the only residents of his complex because they are “perfect in scale and silliness.”

Matthews said his most treasured items are those with meaningful stories.

Located on one of the complex’s rooftop gardens — which change in decor and landscaping seasonally — is a replica of late artist Cyril Lixenberg’s sculpture, “Amaranth.” The full-scale version resides outside of Mackinac Hall on the Allendale Campus.

“When Cyril would visit West Michigan, he would bring host gifts, including Dutch gin and cheese, and, occasionally, a small sculpture,” Matthews said.

While Matthews designs the wings, he doesn’t construct them because he is “not allowed to use power tools.”

“Everywhere I go, I have a room in mind, say a kitchen, library or theater, and I put pieces I see into these categories,” Matthews said. “Eventually, that room is created by master carpenter Greg Harrison and those items come together.”

A number of museums have expressed interest in displaying the complex in the past, but challenging transportation logistics have put the kibosh on possible exhibitions.

“It’s too overwhelming because each room is literally filled with hundreds of things,” Matthews said.

Despite the attention his collection has received over the years, Matthews said he’s simply following a passion. “In the end, this is all just about having fun,” he said. 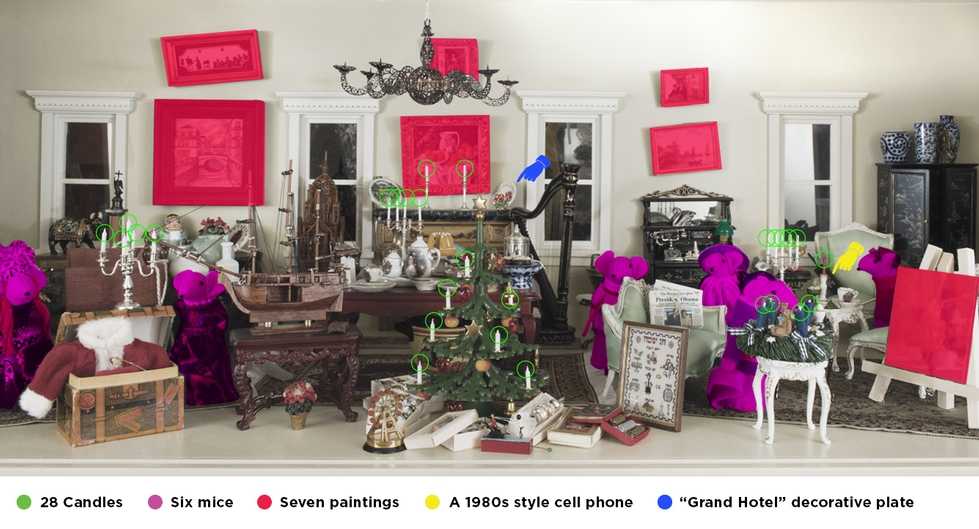 For a larger view of the image, click here.


Page last modified January 27, 2017
Report a problem with this page