The arrow in flight

“The following moments were quick and precious: the tension leaving my back; the string sliding from the tip of my glove; the shock of the bow in my hand, as the arrow left the rest. It was perfect. All of it. And it flew perfectly ...”

The excerpt above is from a short story written by Nick Viau, multimedia coordinator for Institutional Marketing. The story, “A Moment in the Snow,” recounts the first time he killed a deer while bowhunting in Allendale.

It was December 22, 2009. He was alone, taking part in a controlled hunt on university property to control the overpopulating deer herd at the time.

“I remember a large group of deer came through,” said Viau. “I got the shakes and my heart rate went up. I told myself I was going to do it. I picked one, popped up, and in one motion, drew and released. That experience changed everything. I was hooked.”

Viau, ’05 and ’08, said he had no interest in hunting when he first started to practice archery. He got the idea to learn after reading a Green Arrow comic book that featured Howard Hill, a professional archer who was a stunt double for Errol Flynn in the movie, “The Adventures of Robin Hood.” He began researching Hill and archery.

“I was fascinated by what I was reading and it made me want to try it,” he said.  “I found out about this entire community and realized Michigan was at the epicenter of traditional archery. I bought a bow and started practicing.”

Viau first practiced in his basement, for hours at a time, shooting arrows into a little box with a comforter stuffed in it. He had to kneel so his head wouldn’t hit the ceiling. When he moved to a different house, he was able to practice in his backyard. 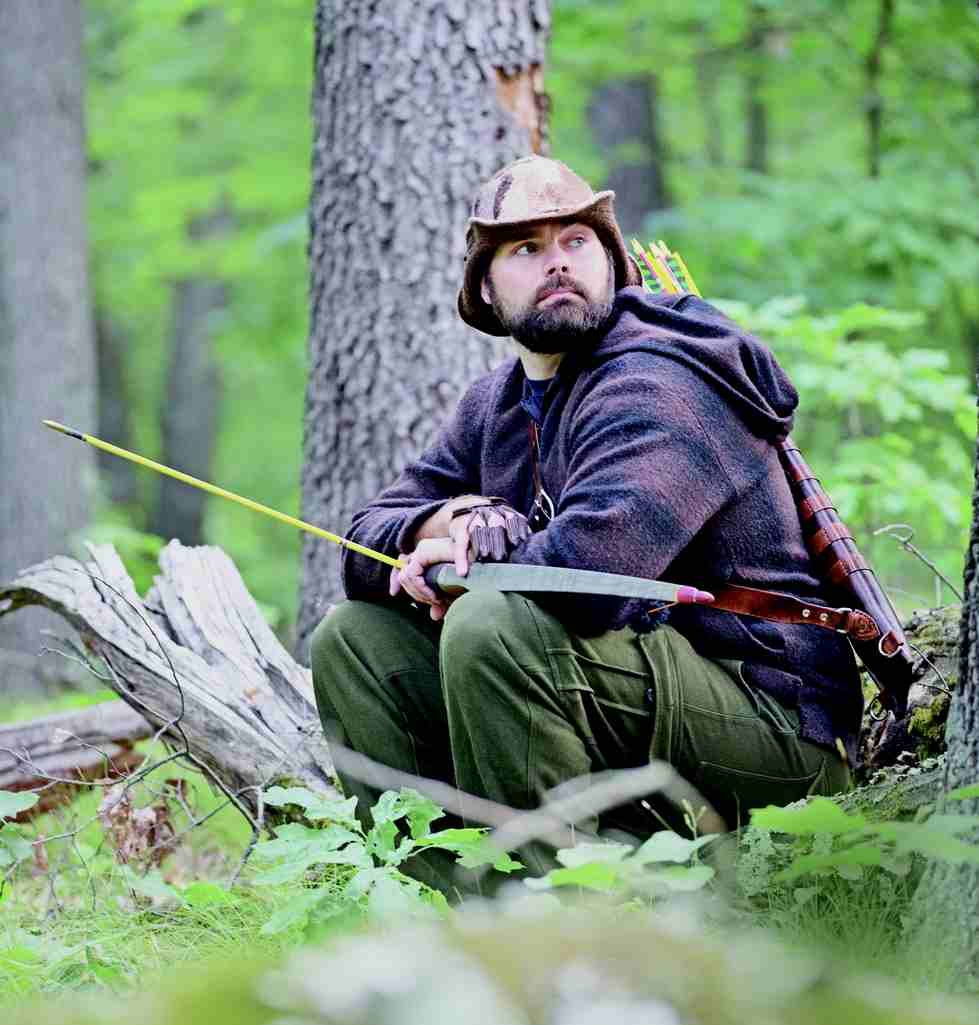 Nick Viau, ’05 and ’08, is pictured in one of his favorite places in the world, a small area of public hunting land in Cannonsburg.

“Archery involves muscle memory, so I would get close to a target, close my eyes and release, trying to get the form down,” he said. “I really love the arrow in flight. That was what I enjoyed the most.”

To sharpen his skills, Viau also spent weekends practicing at an archery range in Allendale, where he connected with bowhunters. Growing up in Cheboygan, some of his family members would hunt deer during rifle season, but he said hunting didn’t interest him at that time.

“I didn’t realize there was a different way to hunt, a more traditional way,” he said.

AN EXCERPT: A MOMENT IN THE SNOW

“I am a bowhunter,” I thought. “I did it.” And I had. After 26 years of having zero hunting interest, I bought a longbow, spent the summer shooting it, and was now entertaining the possibility of harvesting my first deer. The idea filled my heart with pride and my head with a daydream.

“There was also pride, satisfaction, accomplishment, and joy. Yes, there was joy. My longbow had worked perfectly. I had performed brilliantly. I had challenged myself and met it head on.”

“I didn’t think of it as an experience, with the idea of giving the deer every advantage and using your head and woodsmanship.”

Viau learned what he could from mentors before starting to bowhunt; the Michigan season runs from October 1– November 14, and December 1–January 1. He hunts from natural cover, making his own blinds; he also fletches his own arrows and made a bow out of black locust wood.

“When I first started, the hardest part for me was to decide to shoot,” he said. “I would see a deer and talk myself out of it. But, now, the moment I decide to do it, my blood starts to rush and something changes inside me.”

Viau’s love for the sport led him to join the Michigan Longbow Association in 2011 and, at age 32, he served as its youngest president in 2014 and continued in that role until this year. There are about 500 families in the organization.

“My goal was to get young families and youth involved,” he said. “We sponsor an archery award day for second- and third-grade students at a local elementary school. Watching their faces as they hit the target made us want to do this at other places, so we set up youth shooting opportunities throughout the state each year.”

“I didn’t think of it as an experience, with the idea of giving the deer every advantage and using your head and woodsmanship.” — Nick Viau

Viau is actively involved within the bowhunting and archery communities and practices year-round to maintain his deft use of a bow and arrow. He said he found an unexpected benefit from both sports — solace.

“It’s peaceful to be out in the woods in the early morning and alone with your thoughts,” he explained. “It starts out very quiet, and then I get to hear everything starting to wake up.

“Archery helps me relieve stress. You lose yourself in it, putting all your focus on the arrow. You store all this energy and then release it; everything that’s bottled up is released.”


Page last modified November 13, 2017
Report a problem with this page