Professor juggles for sport and health

It’s one of those things that makes people stop and stare — seeing someone juggle.

Corey Anton, professor of communication studies, is now used to being the object of attention. Anton learned to juggle 15 years ago, partly to impress his wife’s family.

“My wife is very talented and comes from a very talented family,” said Anton. “She paints and her mother paints and sculpts. I wanted to do something creative and thought learning to juggle would be fun and a great way to connect with people.”

Learning to juggle five balls took patience, determination and a very long time. “You have to suffer a year or longer of failure to juggle five. I probably worked at it, even if only a little bit, every day for more than a year,” he said.

“Most jugglers go from five to seven balls because of how the cascade works,” he said. “Juggling is counting; you have to count. It’s not a game of catching so much as learning how to throw to the perfect spot. You look at the balls, not your hands. Six is difficult. There aren’t many six-ball jugglers, but six in a fountain pattern looks great.” 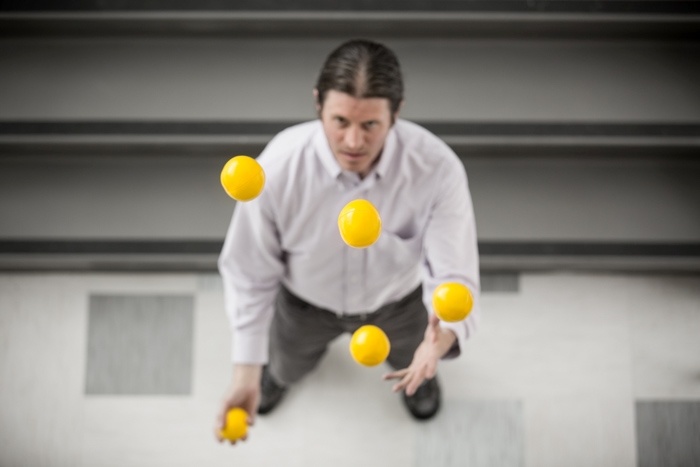 Corey Anton, professor of communication studies, enjoys teaching others to juggle. He said juggling helps him relax and has helped strengthen his back.

Anton has a list of about 30 three-ball tricks he can perform. Some of his favorites are The Fake, The Robotic Drop, Burke’s Barrage and Mill’s Mess.

While Anton juggles for sport, it has also helped him physically. He underwent back surgery 15 years ago and juggling, which requires standing tall while bending at the knees, helped strengthen his back.

“It’s a low-impact, simple way to tone muscle,” he said. “When juggling, your body is much quicker than you realize, so you’re learning to slow your muscles down while you are throwing balls in the air. Juggling is also related to brain growth and development. Anything you can do to strengthen your non-dominant hand stimulates brain growth and creativity.”

Anton tries to juggle every day, even if only for a couple minutes. He enjoys teaching others to juggle and has held various workshops in the area including during Grand Valley’s Shakespeare Festival.

He sometimes draws a crowd when juggling in public, and has learned not to sweat it when dropping a ball. “Juggling is a form of aesthetically pleasing public meditation,” said Anton, “but dropping a ball is a showstopper. It’s not like when a singer hits a bad note. People are more forgiving because the next note immediately takes its place. Not so with juggling. Still, I have learned to just pick up the ball and keep going.”

Anton has been able to learn new juggling tricks from some of the best in the business. 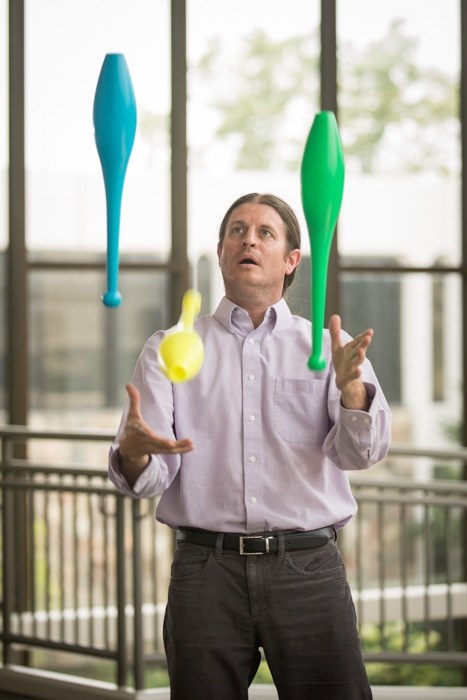 “My wife and I travel a lot and I have learned tricks and techniques from jugglers in Italy, Greece and Hawaii,” he said. “In fact, we were in Hawaii and I saw a man juggling six balls. I told him I was just learning to do six. He winked at me and started doing a six-ball ‘crab claw’ behind his back and over his head. He turned out to be Tony Flowers, a famous juggler. It was amazing, humbling and inspiring.”

A few months ago, Anton started juggling with clubs — something he said is much more difficult.

“I have taken more than one to the eye since I first started with clubs. They can be painful. If I could juggle four clubs, I’d be really happy,” he said.

Anton said he is not one to sit on the sidelines of life. He would rather teach people to juggle than just have them watch. And, while juggling may seem stressful for those watching, Anton said it helps him relax.

“As I said, it’s a type of meditation. If I’ve had a long, stressful day, I can come home, throw some balls in the air, and in 10 minutes I’m quickly mellowed out,” he said.


Page last modified February 1, 2017
Report a problem with this page