It was a chilly January night in 1965 when the then-Grand Valley State College’s basketball team took to the court and defeated the Muskegon Community College team in a close game, marking the first-ever intercollegiate win for a GVSC team.

But the team jerseys that night didn’t bear the name of a mascot, or even a nickname. The early colleges had no athletic identity. It would take more than three decades for the Grand Valley mascot to come to be the Louie that students and alumni know and love today. 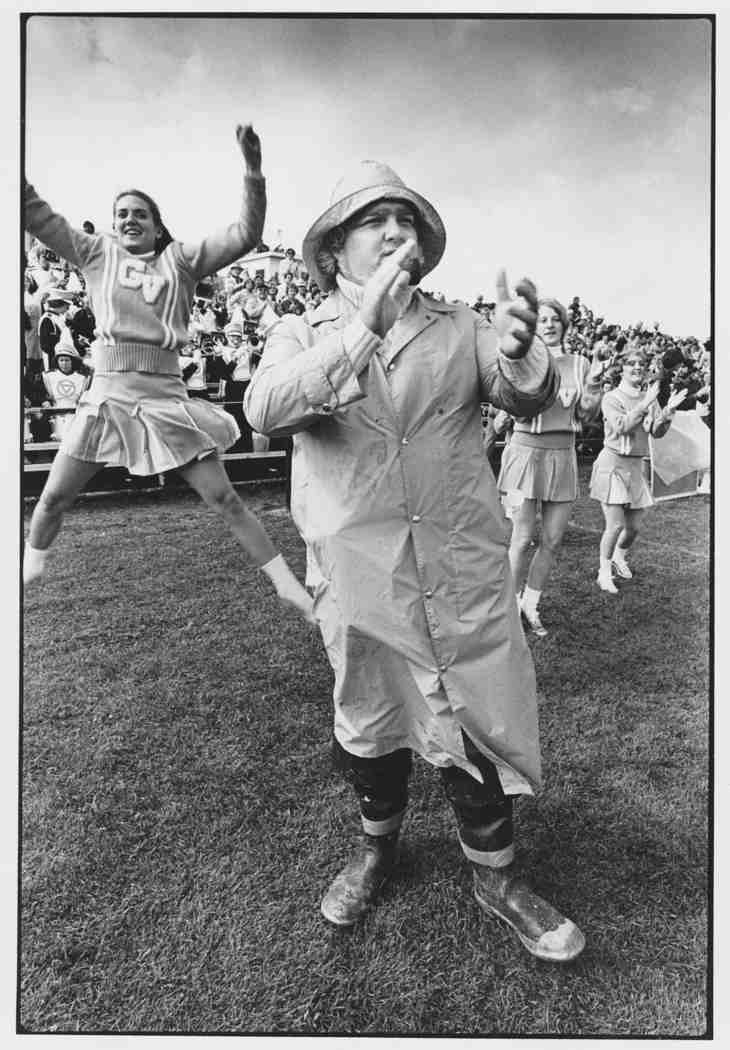 Shortly after that first win, the need for a formal nickname was recognized and a contest was established. The options included Warriors, Bluejays, Archers, Voyagers, Ottawas and the Bruisers (a suggestion derived from the school colors of black, blue and white). But according to historical records in Grand Valley’s Special Collections and University Archives, the students opted for Lakers, a write-in suggestion submitted by Annie Kate McDonald, a student from Grand Haven.

With that, a nickname was born. The Lakers moniker did face some challenges over time, the most significant of which took place in 1975. That year, a nickname task force recommended changing the nickname of the college from Lakers to Sawyers.

In a memo to faculty and staff members, the task force cited several pros to the Sawyers nickname and many cons to the Lakers, while actively advocating for the change.

The memo said, “Lakers has a great deal of traditional value as a nickname. It has endured unchanged thru (sic) 10 years and two college re-organizations, but it has never been entirely satisfactory because: (1) we haven’t been able to come up with a logo to go along with it; (2) the Grand Valley Lakers have to compete each year against the Lake Superior State College Lakers and the Mercyhurst College Lakers, and the rivalries can become confusing, if not downright cannibalistic; and (3) ‘Lakers’ bears no real relationship to the uniqueness of the Colleges, or the countryside.”

The Sawyers nickname, the task force argued, was more original, and a number of “attractive logo possibilities” had been suggested.

“The name comes from the lumber mills along the Grand River that comprised Allendale’s largest industry in the 19th century,” the memo said. “Sawyers (sometimes known as ‘Sawpersons’) were the men and women who ran the great saws in the mills and the name provides a unique link between the rich history of the Allendale community and the riverside character of the GVSC campus.”

Faculty and staff members were encouraged to send back a simple yes or no “ballot” to indicate support or dissent to the change. Obviously, there weren’t enough votes to make a change.

Once the nickname was solidified in the mid-1970s, a mascot wasn’t far behind — but it didn’t start out as Louie, it was a character known as the Great Laker, the brainchild of the sports information and university marketing departments.

Dan Castle, owner of Morat’s Bakery in New Era, said he was the first Great Laker, and held the job from 1977 until he graduated in 1980.

He was working in the advertising department at the Lanthorn, Grand Valley’s student-run newspaper, and only took the job when the student who had been considered fell through. Castle was a theater major, already had a big bushy beard, and said he thought it would be fun to serve as a figurehead of the school during athletic events.

"I was nervous about what my friends would think."
— Dan Castle

“I really enjoyed the whole process, it was a great gig,” Castle said. “But I will admit I was nervous at first. It’s not like mascots today where it’s a big mask and outfit, it was just me with some beard dye spray and makeup and a funny outfit. I was nervous about what my friends would think.”

But Castle said he was well-received by students and the student athletes he traveled with to away games.

“Those were the years that Grand Valley sports really started to pick up and do well,” Castle said. “I also think that it was a time when there was a transition from it not being cool to care about school spirit to a time when it was more acceptable, which made being the mascot much easier.”

Castle said being the Great Laker led to some interesting experiences, including being chased by a mob of angry Ferris State fans who wanted to steal his hat after a basketball game to getting in a mock-fight with another mascot at mid-field.

After Castle, Paul Hagan took over as the Great Laker for one season, but only took the role because of an injury. As a member of the cheer team, Hagan fell during a stunt and separated his shoulder, which meant he couldn’t cheer. But the mascot role was open, so he played the part for a football and basketball season. 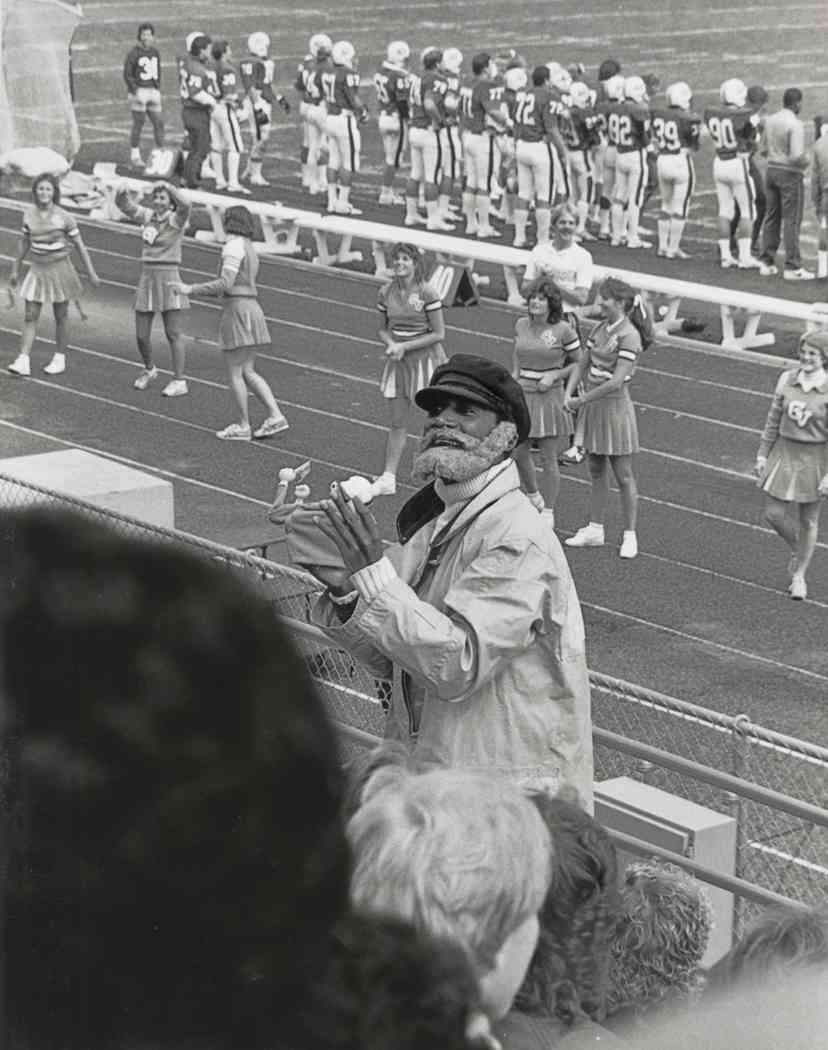 Ron Gates rallies the crowd with a puppet on his hand, circa 1981.

Hagan said the costume was the same as Castle’s, with heavy rubber boots, a raincoat and a rain hat, but Hagan had to use spirit gum to glue on a fake beard before each game. “It was a sticky mess,” he said.

Hagan only served as the Great Laker for one year, after which Ron Gates assumed the role. Hagan said that Gates did the most to create a character out of the Great Laker, including building a routine of crowd-pleasing antics and gags.

After Gates, the record of who served as the Great Laker is largely incomplete. Archive searches indicate that the Great Laker costume changed to include a large foam head around 1986 and stayed relatively the same until the arrival of athletic director Tim Selgo in 1996.

While some mascots are the results of contests or marketing studies, Louie was born from Selgo’s imagination, while sitting in a car traveling to Saginaw just months after he started at the university.

“I was sitting in the car with Odie (Rob Odejewski, the late assistant athletic director for marketing and promotions) on the way to a GLIAC softball tournament in Saginaw in 1996, talking about what we wanted to do to promote athletics more, and we’d been talking about a mascot,” Selgo said. “We knew it had to start with the same letter. So I said, ‘What about Larry the Laker?’ and Odie said, ‘No, that sounds ridiculous,’ and I said, ‘OK, what about Louie?’ And he liked it, and that was that. We had Louie the Laker.”

It would take two more years for Louie to look like the mascot of today, and the biggest appearance change came after a football game in 1997 at the University of California-Davis.

In 1996, Selgo approached the Student Senate and asked the senators who the most spirited students on campus were, and he got the name of Josh Lamers and a group of his friends. Selgo asked them into his office for pizza and to talk about marketing athletic events. Lamers said they suggested a mascot, and Selgo asked if they knew anyone who would be interested — Lamers jumped at the chance, Selgo said.

Lamers was the first Louie in a giant foam head (about 3 to 4 feet tall, according to his recollection) and the jersey of whatever sport he was attending. That setup worked for 1996, but in 1997, the game at UC-Davis would forever change how Louie looked.

At that time, Selgo said, UC-Davis was one of the major powerhouses of Division II college football, and had a major fan presence for home games. At the game, Selgo said he saw Lamers being heckled and given a hard time by the UC-Davis fans because of his outfit, which had been updated with a football jersey rather than a raincoat, but still featured a big foam head. Selgo wasn’t the only one who noticed. 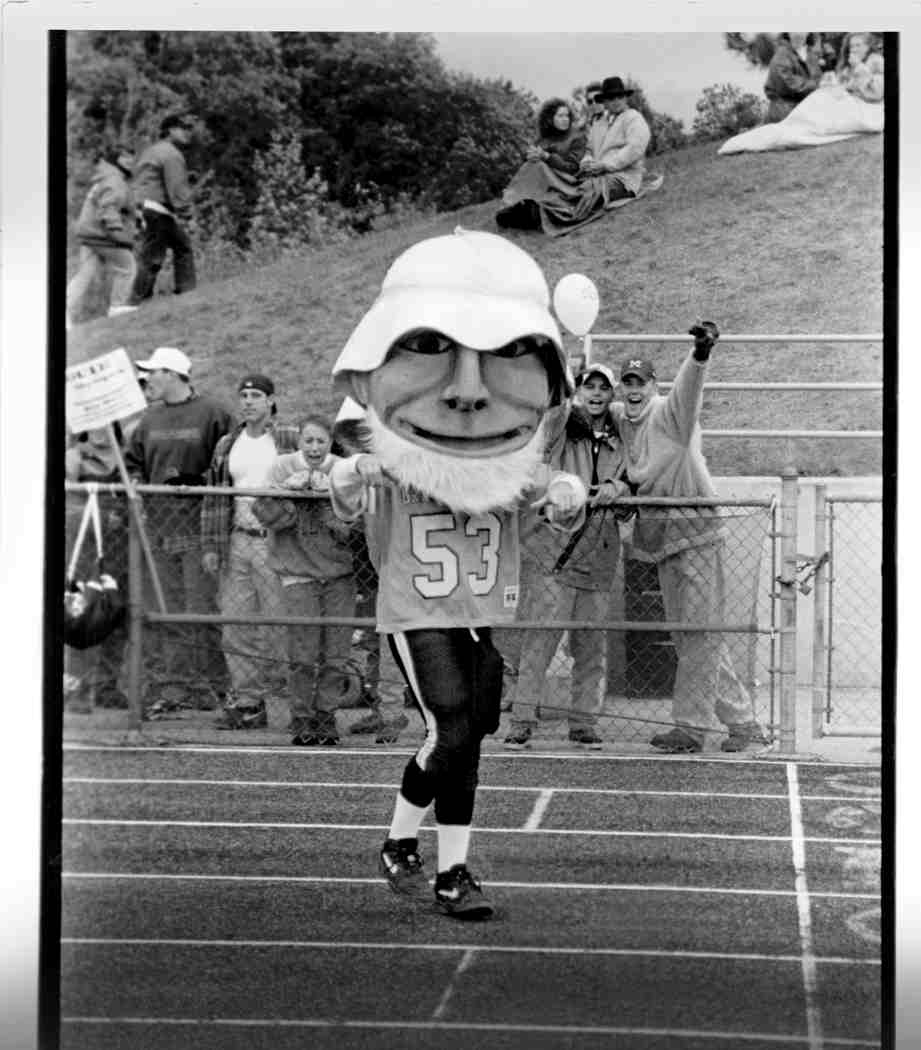 “Ron VanSteeland (former university vice president) saw him getting hassled and came up to me and said, ‘We need something better for the mascot. I’ll pay for it, you just find something that’s a little more presentable on a national stage,’” Selgo said.

The next year, Louie the Laker in his current form was introduced, and has stayed largely the same since, with a few minor cosmetic changes over the years, including changing details like the logo and trim on his hat, adding receiver gloves that feature the logo, and giving Louie a bit more muscle mass in the costume.

The Louie logo did undergo a change in 2001, when representatives from the Peoria (Illinois) Rivermen, a minor-league hockey team, claimed that it was too similar to their own, but the dispute was settled amicably between Grand Valley and the team.

Selgo said he thinks having a recognizable mascot is critically important for the success of athletic programs, and said having a family-friendly atmosphere that Louie contributes to is key to bringing in alumni and area families.

“Having that mascot is huge,” Selgo said. “It’s that way with lots of big athletic programs. You see Sparty, you think MSU. You see Brutus, you think Ohio State. You see Louie? You bet you’re thinking GVSU. He’s an icon for us. He’s a legend in GVSU history.”

Lamers, who was Louie from 1996-97, said Selgo and Odejewski’s efforts to promote Laker athletics, with Louie and a slew of other tools, is the reason Grand Valley’s varsity sports teams are as popular and successful as they are. 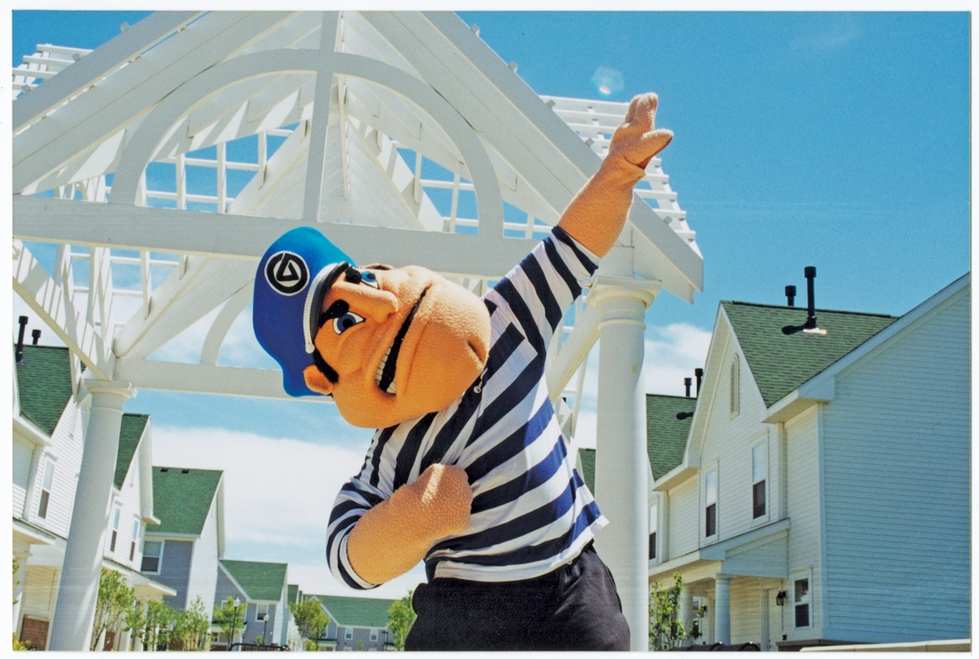 Modern Louie’s hat trim has changed from white to gold, and the logo has been changed as well. Louie is also a bit more muscular than he used to be.

“In 1996 we’d be lucky to have 500 people in the stands for a home game, and most of them would be friends or family of the football team,” Lamers said. “That promotion and branding, along with good teams, is why we have the athletic experience we have today.”

And Louie continues to be popular. He is a hit with fans, and is asked to make appearances at more than athletic events. Selgo said Louie is requested for parades, business openings, holiday activities, and has even been asked to show up at weddings in the past.

“There are times where Louie is booked up,” Selgo said. “You have to remember that ‘Louie’ has to go to class, too.”

Since Louie’s unveiling in his modern form in 1998, the students who have spent time in the costume have remained relatively secret. There are tryouts for students who want to be Louie, and Selgo said that even he doesn’t know the identity of the student who is selected.

The only people who know Louie’s identity are game day staff and probably some family and friends, Selgo said.

“We really appreciate the students over the years who have been Louie for us,” Selgo said. “It’s really hard work to be a good mascot, and we’re very thankful to have had such great students represent us so well over the years.”

Louie, are you out there?

Were you, or do you know a classmate who was the Great Laker or Louie?

We would enjoy hearing your stories! Send an email to [email protected] and a follow-up may appear in a future Grand Valley Magazine.


Page last modified May 26, 2016
Report a problem with this page