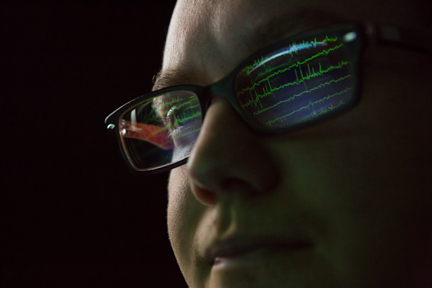 It is one of the most common neurological disorders and there is no known cure. It affects approximately 1 percent of the world's population, and about one in 10 people has suffered a seizure.

"There are a lot of theories, but we don't know why epilepsy happens," said James Gurisko, a graduate student in Grand Valley's biomedical engineering master's program. "A seizure is a change in the electrical activity of your brain, which is a problem because your brain has a very defined way of working."

A group of faculty members and two graduate students, including Gurisko, have teamed with physicians from the Epilepsy Monitoring Unit (EMU) at Spectrum Health Butterworth Hospital to research epilepsy and help patients manage it.

This partnership is one of many that provides an opportunity for Grand Valley graduate students to gain practical experience while obtaining a master's degree in biomedical engineering, one of the fastest growing professions in the nation.

In 2011, Grand Valley became the first university in West Michigan to offer a graduate-level degree in biomedical engineering — a field that pairs engineering expertise with medical design and the only program in Michigan to focus on medical device design and development.

"The aging population and a growing focus on health issues will drive demand for better medical devices, equipment and techniques designed by biomedical engineers," said Joe Iannelli, director of the School of Engineering in the Padnos College of Engineering and Computing. "Our program is even more valuable with the Pew Grand Rapids Campus located in close proximity to Grand Rapids growing medical research and biomedical industries."

The program, funded by a grant from the National Science Foundation, was established in 2010 by engineering professors Samhita Rhodes and John Farris. It has since paired dozens of students with dozens of companies in the West Michigan area, including Spectrum Health and Van Andel Institute. The Grand Valley-Spectrum Health partnership was the first in the program, and began when Drs. Konstantin Elisevich and Brien Smith contacted the School of Engineering for assistance with their research. Elisevich is co-chair of the Department of Clinical Neurosciences at Spectrum and an epilepsy surgeon; Smith works at Spectrum Health's EMU.

Elisevich also contacted former patient Paul Fishback, professor of mathematics at Grand Valley. Elisevich successfully performed surgery on Fishback in 2006 to manage his epileptic seizures. "I was pretty enthusiastic when Dr. Elisevich moved to Grand Rapids in 2011 and reached out to me," said Fishback.

Rhodes and engineering professor Rob Bossemeyer recruited Gurisko and Jeremy Pace to assist Elisevich and the epilepsy team with the time-consuming task of analyzing data from his patients in the EMU. The unit's researchers and physicians focus on helping patients who are considering a surgical procedure, like Fishback's, to help manage or decrease occurrences.

"Every seizure is different and unique for every person," said Gurisko, a native of Wyandotte. "It's very difficult to pinpoint and its very difficult to fix. He said about two-thirds of epilepsy patients can control their seizures with medications, while surgery is another option for the remaining one-third."

At the EMU an epileptologist will analyze data from a video electroencephalogram (EEG) by hand. The data comes from several electrodes, numbering at times more than 100, that are implanted in a patient's brain.

"That's a lot of data. It's very complex to analyze, which is how we've been helping," said Gurisko.

Pace, who also earned a bachelor's degree from Grand Valley in electrical engineering, started in 2011 by analyzing data from the EEG of two patients in the EMU. Using a variety of methods and techniques, including a university-owned super computer, he went through the data, which was collected 24 hours a day for two weeks, and classified spots when a seizure might have occurred.

When Pace graduated in 2013, Gurisko took the data and has been trying to pinpoint where a seizure starts. He said by analyzing each suspected seizure point, patterns will appear, which can help locate where in the brain a seizure starts.

"Our ultimate goal is to speed up the data analyzing process through a variety of techniques to maximize the success rate of surgery and minimize the amount of tissue that could be removed during surgery," Gurisko explained.

Gurisko and Pace said they experienced some challenges along the way. "When I began working with Dr. Elisevich, I knew very little about epilepsy, so one of the biggest hurdles was teaching myself all about the disorder," Pace said. "I had the opportunity to watch him perform a
craniotomy where he implanted the electrodes. That's where it all started."

Gurisko said upon graduation, he wants to continue this type of research. "Biomedical engineering is so rewarding because you see how your work directly affects people in a positive way," he said.

Rhodes, Farris and engineering professor Bruce Dunne are working to expand the program. "The first grant we received helped us support the program, now we want to move it forward so our students can continue to contribute to the growing field of biomedical engineering," Rhodes said.

In 2011, biomedical engineering graduate students Ryan Bozio and Andy Vander Moren were enrolled in a medical device design class led by John Farris, professor of engineering. They were introduced to a project that had the potential to help thousands of surgical patients.

The students worked with Spectrum Health Innovations to design a tube organizer, which can organize and stabilize the tubes of medical and surgical patients. It has the potential to be used in a number of medical settings where there are a number of tubes being used such as kidney dialysis and critical care units. It's also ideal for mobile patients connected to multiple tubes and wires.

Some patients can have multiple tubes hooked to them so a device to secure these tubes was needed to allow these patients to move around easier, Bozio explained.

The initial problem was identified by a cardiovascular physician at Spectrum Health who was looking for a practical, secure way to organize medical tubes attached to one of his patients.

Throughout the semester, the students met with Mike Miller, director of Intellectual Asset Management for Spectrum Health Innovations, to discuss design concepts. The original idea was to create something that can help a person do simple tasks such as getting out of a chair or going for a walk, something they otherwise cant do without some type of support, said Miller.

Bozio and Vander Moren created numerous prototypes and tested them out on each other. "I sewed the belt portion on my kitchen table, which worked really well, especially for someone who can barely sew on a button," said Vander Moren. They used a 3-D printer at Grand Valley to print plastic tubes and researched the best types of fabrics and materials.

When the semester ended, the students presented their final design to Miller and the physicians who would eventually use the device.

"We worked with engineering firms on possible designs before coming to Grand Valley," Miller said, "but Andy and Ryans design knocked it out of the park."

Miller said the tube organizer has been fitted on several patients at Spectrum Health. The next stage is to get the device patented so it can be commercially produced and used by patients across the country. 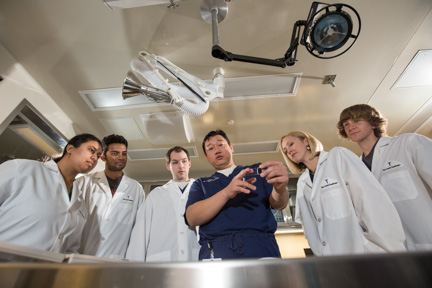 Students gather in a medical imaging lab at Van Andel Institute. They are researching new medical imaging methods, a growing field that aims to improve detection of cancer and disease.

A group of students and faculty has been working with Van Andel Institute to develop new methods to further a growing medical field that aims to improve early detection of cancer and disease.

Chang said, in the future, if a tumor or lesion is found, a doctor will, with the help of advanced imaging technology, be able to predict early on if it will spread or grow. "The medical imaging field, especially molecular imaging is booming," he said. "It's a new concept, and right now people are starting to realize the power of this technology."

A group of graduate students, including Anderson Peck and Chang, helped form the research lab at VAI three years ago.

Peck, who was in the first class of the biomedical master's program in 2010, now works at VAI as a full-time researcher. VAI is the only place in Michigan that's developing these new techniques. "We have a few new techniques, and hope they'll be used in the future," said Peck.

Chang said: "We have a strong presence in the imaging research field, which before, only happened at really big universities. We're putting Grand Valley and Grand Rapids on the map in this field. VAI and our students are helping develop new techniques and concepts that could save lives."

The group presented three years worth of research at the World Molecular Imaging Congress, one of the largest meetings in the medical imaging field, in late September in Savannah, Georgia.


Page last modified November 1, 2016
Report a problem with this page