Caught in the middle

Scholarship would fill gap for students 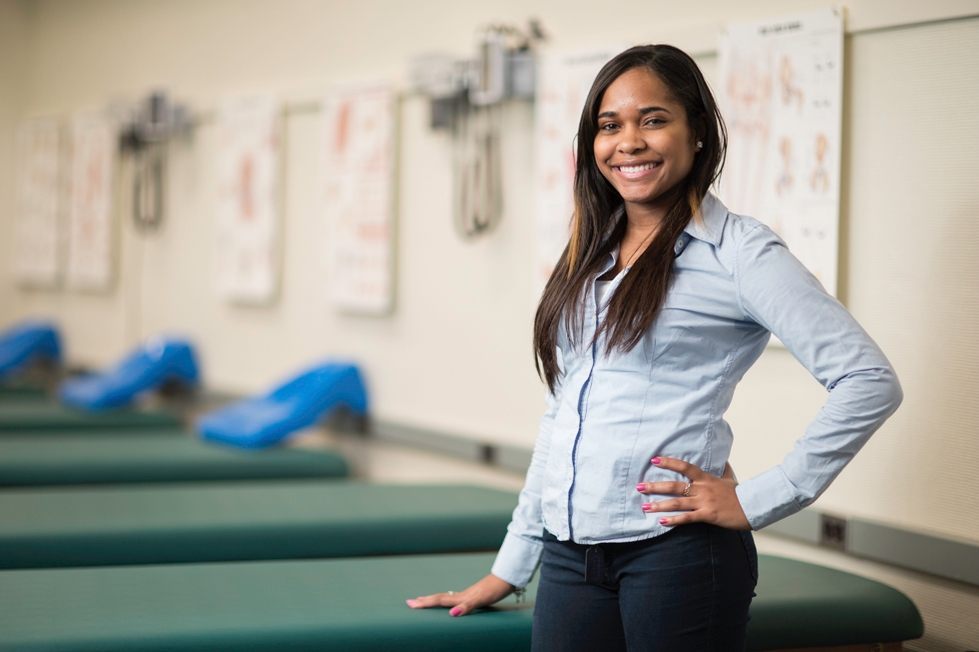 Kierra Washington, an athletic training major, said receiving a Pathway Scholarship would ease the burden of paying for her education.

Kierra Washington is an athletic training major from Southfield who, like many other Grand Valley students, is paying for her education with a combination of loans and scholarships.

A new scholarship initiative was created to help Washington and others like her who are caught in the middle: students from working families with incomes higher than federal financial aid limits but who need help paying for their education. When fully funded, the Pathway Scholarships would fill the gap between savings and financial aid for families sending students to Grand Valley.

If she received a Pathway Scholarship, Washington said she would be able to take out fewer loans.

“It would mean I wouldn’t have to stress about my education and where my money is coming from,” she said. “Receiving another scholarship would help me further my education.” She is among the recipients of the Thompson Working Family Scholarship.

Michelle Rhodes, director of Financial Aid, said Pathway Scholarships spurred from a conversation with a hypothetical question. “I was asked, ‘If we were to get a really large donation right now, where would you choose to use it?’” Rhodes said. “In other words, where did I see the most need?”

Immediately, Rhodes thought of students who are grouped in the middle class and from families who struggle to pay for a college education in addition to regular household bills.

Washington hopes to eventually earn a doctorate in physical therapy. She said she pushes herself academically to make her mother proud. Washington was raised in a single-parent household and said her mother didn’t get a chance to attend college until later in life.

“My grandparents, uncle and aunt also helped raise me and, along with my mother, were very positive role models in my life,” she said.

Washington added that the cost of an advanced degree worries her. “I just hope to continue to get more scholarships and will probably have to take out more loans,” she said.

Rhodes said today’s economy makes paying for college a struggle for many families.

She added that Washington’s story is a familiar one. When students begin receiving tuition bills in July and August, the phones in the Financial Aid office begin ringing.

“We get a lot of calls in the summer,” Rhodes said. “Students are wondering why their financial aid is not as much as they thought. They’re wondering how they are going to pay the bill. “The Pathway Scholarship could be the difference in making or breaking a student’s plan to continue attending classes, or drop out to work.”

There are several ways to support the Pathway Scholarship.

• Annual Pathway Scholarships: Gifts will be put to use immediately.

• Grand Valley Fund: Gifts to this fund will provide support annually for the highest priorities of the university.

Generations of students will be the beneficiaries of two new scholarships established on behalf of Grand Valley’s Pioneer Class (Class of ’67) and the Class of ’68.

Alumni united from both of these classes to start scholarships in the past year. The Pioneer Class Scholarship has been fully endowed, which means it will be available to students in perpetuity. The Class of ’68 scholarship, started with a generous matching gift opportunity in December, is well on its way to becoming endowed. As the funds continue to grow, more students will receive larger scholarships. To support either of these scholarships or begin one to honor your class, visit www.gvsu.edu/giving/scholarships.

More than 20 businesses from West Michigan gathered to show their support for the Seidman College of Business Study Abroad Scholarship. International experiences are critical both for students and local employers who are looking for fresh, young talent with a global perspective.

More than $78,000 was raised by this group, demonstrating support for increasing multicultural, international experiences for Grand Valley students. To support this scholarship visit www.gvsu.edu/giving/give and enter “SCB Study Abroad Scholarship.”

To learn more about how companies can get involved with Grand Valley, visit www.gvsu.edu/giving/corporate.

Students support each other

Grand Valley students demonstrated that they are Lakers for a Lifetime and gave a record amount of gifts this year as they supported the Student Legacy Scholarship.

Responding to a challenge from President Thomas J. Haas, many students increased their giving this year and helped take a Laker tradition to a new level. All gifts made to this fund are designated to help future Lakers. To learn more or support the Student Legacy Scholarship visit www.gvsu.edu/giving/thaaschallenge.

The scholarship is awarded to students who have demonstrated leadership in West Michigan and intend to contribute their skills to benefit West Michigan. More than $70,000 was raised, including presidential match money, increasing the fund by 50 percent and expanding the
number of students who will receive scholarships in the coming years.

To give to the scholarship visit www.gvsu.edu/giving/give.


Page last modified March 21, 2017
Report a problem with this page