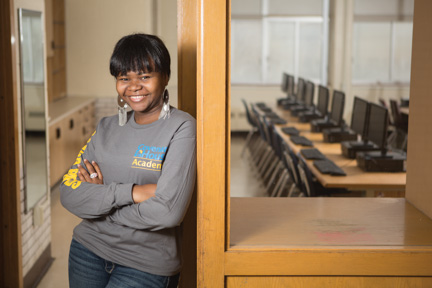 Rebecca Mubiyayi, a refugee from the Democratic Republic of the Congo, is working toward a high school diploma with the help of a specialized program at Covenant House in Grand Rapids.

Rebecca Mukiyayi wants to be a doctor, but knows she has to finish high school and earn a diploma to have a shot at college and, eventually, medical school. But Mubiyayi, a refugee from the Democratic Republic of the Congo, is still working to overcome an education and a childhood disrupted by war. Because she's 19 years old, Mubiyayi is enrolled at Covenant House Academy Grand Rapids, a charter school authorized by Grand Valley that works with homeless and at-risk students who would otherwise age-out of the public school system and lose a chance at earning a diploma.

Her journey to Grand Rapids started more than a decade ago, around the end of the Second Congo War in 2003. Mubiyayi was living in Kinshasa, the largest city in the DRC, with her mother and siblings.

Where we were living was very bad, very poor, she said. It was difficult to find food, so we moved across the country to be with my dad in Goma, and that's when more of the fighting started.

Gun battles between warring groups were common in the city, forcing Mubiyayi and her family to flee their home whenever the gunfire got too close. She saw neighbors raped and killed. Then, her father was abducted.

Some people came and grabbed my dad and put him in the back of a car, and tied him up with rope, and left with him, Mubiyayi said. It would be the last time she would ever see him.

In an effort to shelter her children from widespread violence, Mubiyayis mother instructed a family friend, who delivered food and goods to cities in bordering Uganda, to take 11-year-old Mubiyayi, along with her 13-year-old brother and 9-year-old sister, to a friends house in Uganda. Somehow, the address was lost in the journey, and the family friend refused to bring the children back into the war-torn DRC. Instead, Mubiyayi and her siblings were abandoned, left alone to survive on the streets where death from disease or starvation was a daily reality.

After two years in Uganda, the trio ended up at a refugee camp in Kenya; from there, they were brought to the U.S. by Bethany Christian Services and placed with foster families in West Michigan.

When I was in the Congo, I went to school until fourth grade, and didn't go to school again until I lived with my foster family in Jenison, Mubiyayi said.

The transition to American schools was difficult. She knew how to say Hi and Bye in English, but the native Lingala speaker knew little else of the culture or language. Mubiyayi was able to reach ninth grade proficiency in her studies while learning English with the help of a tutor, but was uncomfortable taking freshman-level courses with students four years younger than she was. She started taking courses at Covenant House to study with students closer to her own age.

Covenant House is one of a few schools statewide with the authority to educate students from age 16-22. Covenant House principal Doreen Mangrum said this makes it an ideal place for nontraditional students like Mubiyayi.

The school also enrolls students who were expelled from other schools, had run-ins with the law, dropped out because of teen pregnancy and childbirth, or are homeless.

"The approach we take is unconditional love and absolute respect," Mangrum said. "We tell these kids that if they show up and continue to work, they will succeed here. It's a different kind of environment. We focus on open heart, open mind, open arms, every single day."

The school focuses on retention, attendance and growth. Mangrum said for students to start working toward a diploma, the very first step is to get them in the door.

Once students are enrolled, they attend for a half-day session, either morning or afternoon. They take computer courses with a curriculum that is tailored to each students individual level in a given subject. There is direct instruction from teachers, but students largely work at their own pace and take online tests and quizzes as they progress, Mangrum said.

No matter why each of the students attends Covenant House, Mangrum treats them with respect, understanding that building relationships with individual students is a large part of the schools function, and will help the students behave and learn how to better interact with other people in their lives.

"These kids are very easy to love. I think about them, I care about them, they're addicting," Mangrum said. "A lot of these kids are just born into hard knocks, or many generations of hard knocks. If there is anything that we can do to help them get out of that cycle, it's critically important that we do it."

Wood said the school started with 40 students last summer and now has an enrollment of 178. Theres a definite need, he said. That population is out there. Students who have been underserved by traditional districts now have a second opportunity to go to school and earn a diploma. It's an incredible opportunity.

Timothy Williams finds the structured environment at Covenant House more conducive to learning than schools he previously attended. He wants to earn his diploma and become a writer. 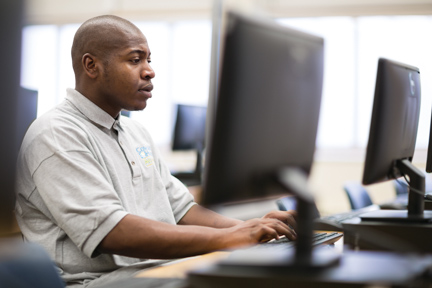 Timothy Williams is a student at Covenant House who is seeking that opportunity. As a child, he and his family did not have secure housing for several years when he was in elementary school. That, coupled with a lack of control in the classroom at the Grand Rapids area high school he attended, caused him to have trouble with his coursework.

"It was distracting, the classes were loud, things were always out of order," Williams said. "I stopped going because I felt like I couldn't get anything done."

"I was cutting school and hanging out, just smoking and drinking," Williams said. "When you're younger, you're easily influenced and that's just what was around."

After two years in two different alternative high schools failed to provide the structure and focus that Williams said he needed, he was told about Covenant House and the opportunity it could mean for him. At the age of 20, it was his last chance to graduate with a diploma instead of a GED.

"I decided to come (to Covenant House) when I realized I wasn't progressing, and I needed to just stop and really focus," Williams said.

Williams is now one of the students who administrators allow to attend both morning and afternoon sessions. Mangrum said its a privilege that must be earned. The school has rules that must be followed such as students wear a specific uniform most days of the week. Williams said that structure and regularity helped him make more progress this summer than he has made in the last several years.

Williams favorite subject is English and writing  he introduces himself as a poet. He spoke at a recent vigil at the school to raise awareness of youth homelessness. Williams said he wants to attend community college and work on writing a novel. He also wants to impress his mom.

"I really want to give her something to be proud of," Williams said. "I want her to be happy and be able to tell her friends that I went to college."

Wood said giving students a chance, which for some is the last real opportunity they have to earn a diploma, is critical and has the potential to change their lives.

"It really gives them hope. The unemployment rate for those without a high school diploma is high, and their options are extremely limited," Wood said. "This gives students an opportunity to earn an education. We're really excited about that component, where you can take a student who has been, for any number of circumstances, unable to complete school and give them that opportunity."

Mangrum said many of the students realize that the school offers hope and support, and some who are older realize that opportunity is knocking.

"They do have hope, there is hope for them, and I think that last hope is really what we offer them," she said. "We tell them it's not over, they can move forward. Some students come in extremely motivated because they realize they've missed their second, third or fourth shot. They still have the same struggles and the same barriers in their way, but the difference is that they are more mature and they handle it differently."

The support system, including breakfast and lunch in the cafeteria, and personalized curriculum are helpful to students. Mangrum is working to establish a day care center at the school so students with children of their own have one less barrier to come back to class. A residential component could be a possibility in the future, which would help students who don't have stable housing worry less about where they will spend the night, Mangrum said.

"The support you get here is something that other schools I went to don't offer," Williams said. "This can help you get back on your feet. You get emotional support, physical support. They help you get over not being able to study if you're tired because you didn't have a place to stay, or you cant think because you're hungry. The teachers want to help you out."

Williams said he thinks one of the most important things students get from Covenant House isn't the diploma, but a different perspective on their lives.

"It gives me something to do with my life that I know isn't going to have me out in the streets and doing the wrong thing. It'll keep me with positive thoughts in my mind," he said. "Sometimes your surroundings build your character and you don't want to build your character into a negative one. It keeps me away from ignorance and helps me stay positive."


Page last modified August 18, 2014
Report a problem with this page