'Grand Valley best place I could have landed'

Shortly before retiring in June, Provost Gayle R. Davis returned to Wichita State University in Kansas to visit friends and colleagues; she had spent 20 years there as a faculty member and administrator before moving to Grand Valley in 2002.

“I told them that Grand Valley was absolutely the best place I could have landed,” Davis said.

Her friends and colleagues agree. 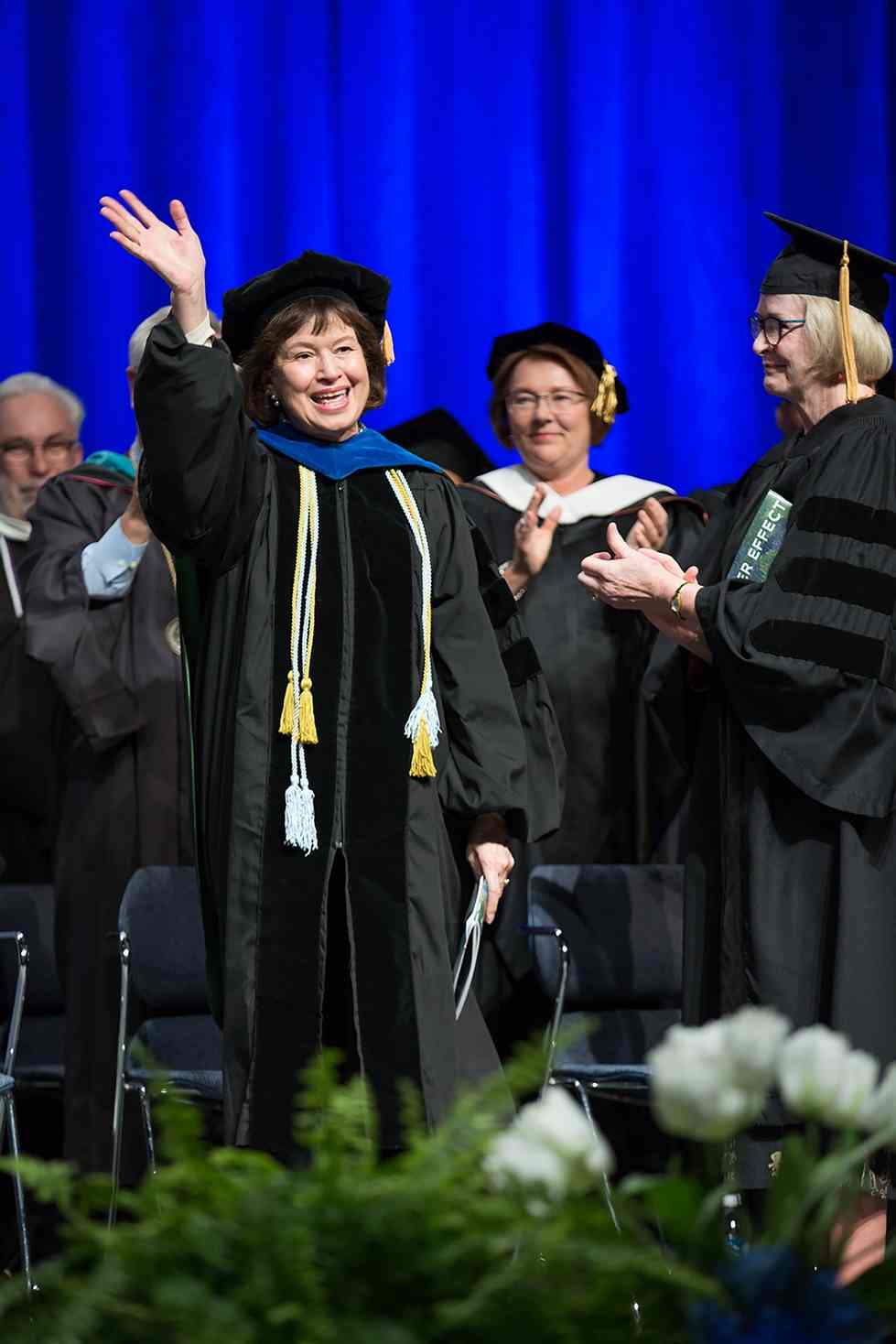 “It’s easy to be a leader for a day, but in 15 years Gayle has been a consistent leader,” said Maria Cimitile, who assumed the role of provost in July. “She has shown us the way by opening the door and saying, ‘Come on in.’”

Statistics from Davis’ 15 years as provost and executive vice president for Academic and Student Affairs certainly indicate that the university has grown in size and stature under her leadership.

President Thomas J. Haas called Davis a champion for diversity and said her areas of influence have touched nearly every aspect of campus, from sustainability and interdisciplinary studies to academic rigor and internationalization. “Gayle has left an indelible mark on Grand Valley and Michigan,” Haas said.

“She’s the consummate academic leader, and she worked with all groups on and off campus, positioning Grand Valley for the future.”

Charles Pazdernik, professor of Classics and member of faculty senate, said Davis’ influence on the university has been enormous, including keeping true to its mission of offering a liberal education and remaining student-centered.

“As a provost, she’s had a breadth of perspective and weight of responsibility that few can appreciate or would be willing to share,” Pazdernik said. “She’s advocated for the faculty while working to ensure that we’re accountable to one another and to our students.”

She said maintaining a liberal education foundation has not always been the popular choice in a world that questions the value of a college degree yet demands competent, intelligent employees.

“We offer what employers say they want in graduates: they want people to lead groups, to think critically and be well-rounded,” Davis said.

In 2004, Davis shepherded the university through a reorganization of its academic colleges to emphasize the core role of a liberal education. Included in this reorganization was the creation of a college that blurred the lines of academic disciplines. Davis said establishing the Brooks College of Interdisciplinary Studies is among her proudest career achievements.

“We have given our students this opportunity, this integration of different disciplines to study and learn,” she said. “Now we see even more crossing of the lines among disciplines. It’s innovation, sustainability, design thinking.

“I like to think of it as the way people live and think. And we offer that to our students.”

While Davis was Provost

“As a provost, she’s had a breadth of perspective and weight of responsibility that few can appreciate.” Charles Pazdernik

Anne Hiskes, dean of Brooks College, said Davis crafted a vision about what a “vibrant, impactful and relevant” campus environment should be, and has brought that vision to reality with collaboration from faculty members and campus leaders.

Donald Mitchell is a former assistant professor of education and coordinator of the master’s of higher education program. He and Davis worked on multiple initiatives during his tenure and Mitchell said he counts himself as a fan.

“She is accessible, communicates clearly and complements President Haas in decision-making so well. And she did this all at a university with 25,000 students,” Mitchell said. “I’m grateful for what I’ve learned from her.”

Davis said her hopes for the future of Grand Valley include that it remain focused on teaching and centered on students. And Davis hopes that future members of the Grand Valley community will discover on campus what she found in 2002. “I hope that people will keep being surprised and delighted by what they find here,” she said.


Page last modified August 11, 2017
Report a problem with this page