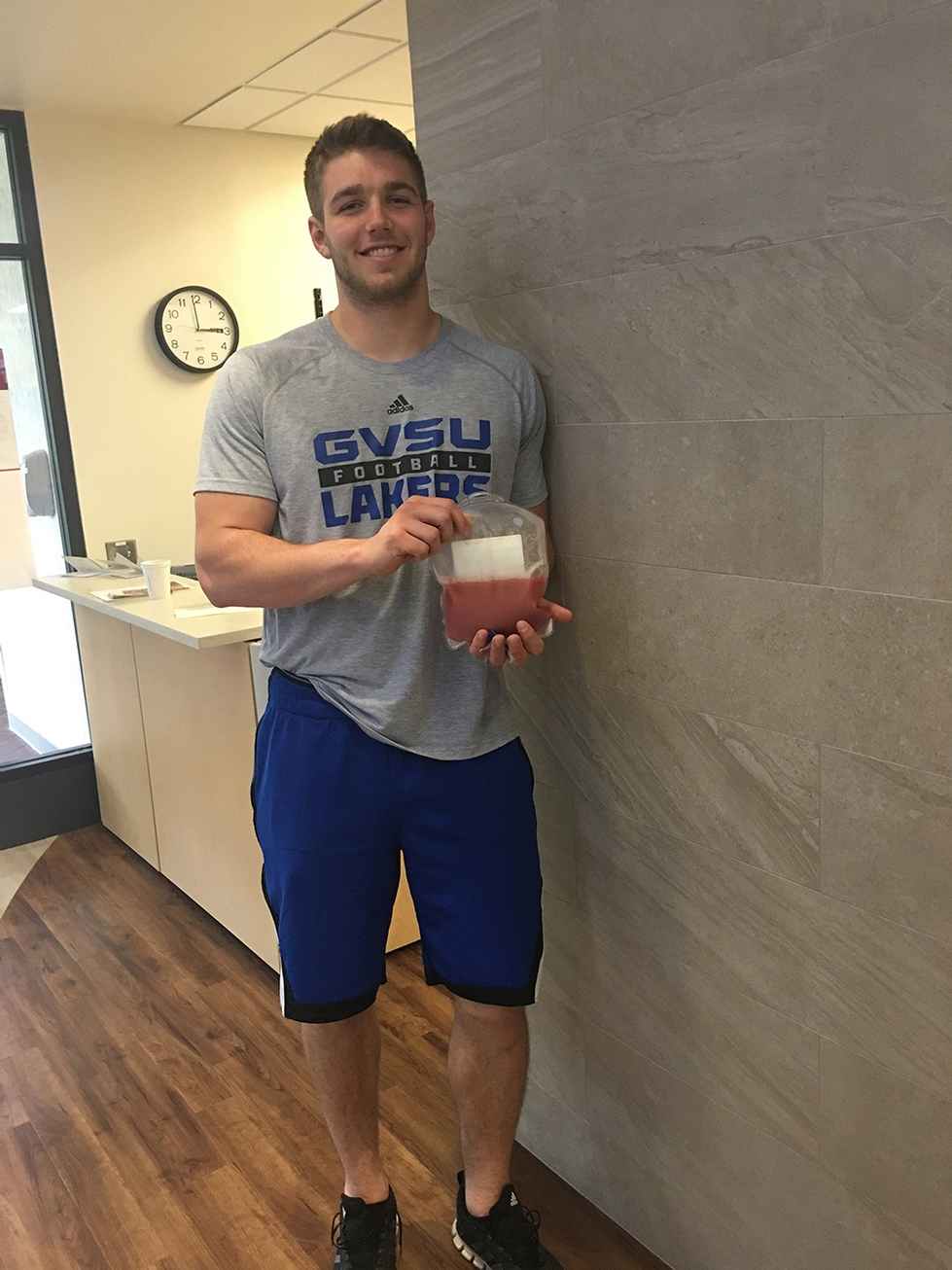 Nick Keizer holds his donated stem cells at Michigan Blood. Keizer was deemed a match for a man in Denmark who needed a bone marrow transplant. (courtesy photo)

Grand Valley football tight end Nick Keizer celebrated his birthday May 2 by donating his stem cells to a man in Denmark who needed a bone marrow transplant to survive.

In March 2016, Keizer and many of his football teammates swabbed the insides of their cheeks during a Michigan Blood registry drive. At the time, Keizer said he never thought he would be a match.

“The presentation pulled at my heart and I thought, ‘Why not sign up to be a donor?’ Yet, I also thought the odds of me actually being a match can’t be that high,” he said.

It’s about a 1-in-500 chance, according to Caitlin Gallagher, community engagement representative for Michigan Blood, Be The Match.

Gallagher said Michigan Blood was notified in December that Keizer was a potential match. He underwent more blood work and in February was deemed a perfect match for a 59-year-old man in Denmark.

Keizer’s donation was non-surgical and took about four hours, with needles in both of his arms. “I’m not a big needle guy, but I figured I could handle a little discomfort, because that doesn’t compare to what the patient is going through,” he said.

His stems cells were then given to a volunteer courier who flew to Denmark on May 2. Gallagher said the transplants usually need to occur within 48 hours.

Keizer, a native of Portage, graduated April 28 with a bachelor’s degree in accounting and finance. He has one more season of eligibility left and will play football for Grand Valley in the fall while pursuing a master’s degree in business administration. 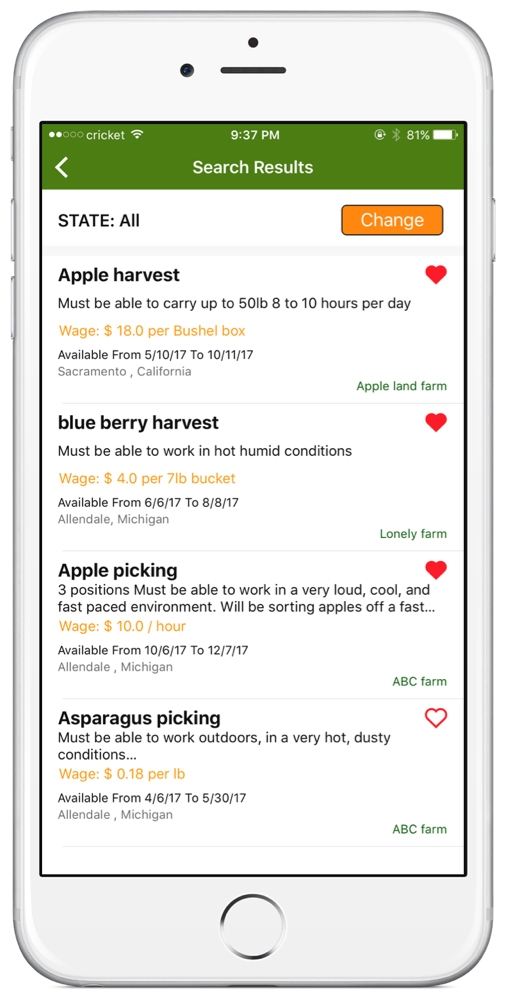 The app AgHelp was developed to assist seasonal workers and the agricultural industry.

Feliciano Paredes grew up in a family of seasonal farmworkers. He remembers the struggles of going to unknown areas for the season, and sometimes they would arrive at a farm to find no work available.

With help from Grand Valley graduate student Xiaomei Huang, Paredes is hoping to solve this problem through an app the two developed.

Paredes was connected to Grand Valley last fall after meeting Linda Chamberlain, Frederik Meijer Endowed Chair of Entrepreneurship and Innovation. She encouraged him to pitch the idea for the app to a mobile application development class.

That is where Paredes met Huang. The pair created a business model for AgHelp; Paredes calls it, “the Yelp for farmworkers” — an app that connects seasonal farmworkers with resources and farms that are hiring. They worked with computing professor Jonathan Engelsma in the Mobile Applications and Services Lab.

“I want to empower workers to find their own help and resources,” Paredes said. “The app will help them connect with a workforce that can maximize the labor that is available in the area.”

Since December 2016, Huang worked on “AgHelp” as her capstone project. She presented the project at IBM’s Women of the Industry Coding Challenge in March and won first place.

“People use apps every day, so this is more than a class project,” Huang said. “We are working on something that is a part of real life. It’s something that can have an impact on many people.”

Paredes doesn’t have coding experience and said he was grateful for Huang’s expertise. “It was just an idea in my head, but with Huang’s passion for the project, we are creating something real and useful,” he said.

Organizations from 45 states have already signed up for “AgHelp” accounts. They represent local, state and federal organizations that connect with workers via the iPhone app.

Paredes is looking for development help for an Android version of the app. For more information, email [email protected].

Paul Kutsche, whose gift established Grand Valley’s Kutsche Office of Local History, died May 18 after several weeks in hospice care. He was 90.

Kutsche, a Grand Rapids native, retired as professor emeritus of anthropology from Colorado College. He returned to Michigan and, in 2008, worked with Grand Valley leaders to establish an office that would support local historians and cultural heritage organizations, and give voice to diverse communities.

Director Kimberly McKee said Kutsche’s passion for preserving the voices of underrepresented communities was evident in his discussions with her.

“He inspired me and my commitment to creating community among those invested in local history and documenting histories of those who often find themselves on the margins,” McKee said. “His loss will be felt by the community as he was a vibrant and steadfast proponent of local history.” 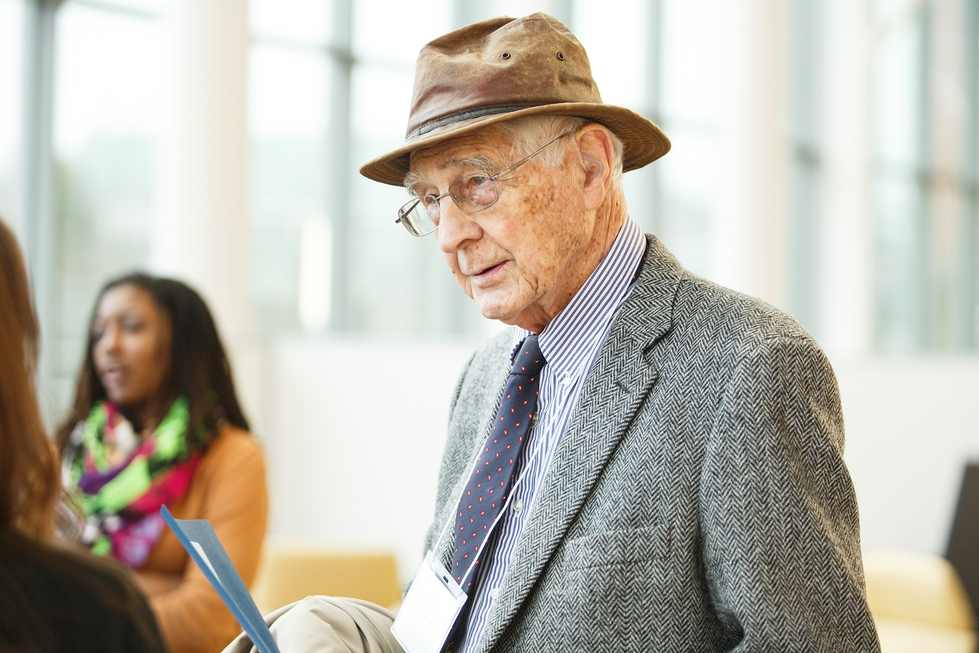 “The Kutsche Office is a fitting legacy for Paul, who was a cultural anthropologist, educator, local historian, and truly engaged citizen of West Michigan and the world,” Hiskes said. “The people of West Michigan and Grand Valley’s students, faculty, and staff will continue to benefit from the generosity of Paul and his family for generations to come.” 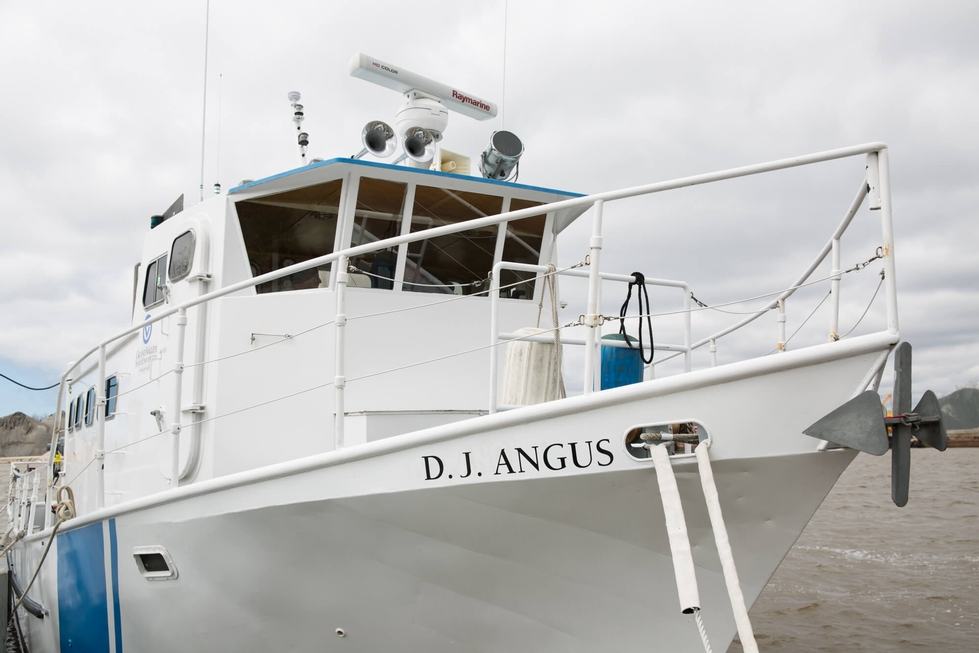 The D.J. Angus, based in Grand Haven, enhanced its research abilities with new upgrades. (Amanda Pitts)

The boat underwent the upgrades during the winter to bring on-board equipment up to the same standard as the Angus’ sister boat, the W.G. Jackson, located in Muskegon Lake at the Annis Water Resources Institute.

“We replaced analog equipment with digital equipment and made several improvements that enhance the efficiency and safety of the vessel,” said fleet captain Tony Fiore.

“It gives us access to navigation charts digitally instead of on paper, so the information is more accurate. It helps us with safety when we’re under way.”

Camera upgrades mean that the captain of the vessel can see, in real-time, what’s happening in all areas of the boat from the wheelhouse, including inside the engine room and on the back research deck. Having that information helps in case of emergency, Fiore said.

Navigation is also greatly improved, as a community data-sharing program provides all vessels that use the Raymarine system with crowd-sourced depth information rather than charts which can become outdated over time.

These upgrades also mean that should a researcher need to use the D.J. Angus instead of the W.G. Jackson, the instrumentation and data collection systems are similar. The new weather sensors digitally track wind speed, wind direction, barometric pressure, temperature and more.

Grand Valley is expanding its health campus in downtown Grand Rapids to accommodate the ever-increasing demand from students and health care providers.

The university’s Board of Trustees approved a building project on the Medical Mile on Michigan Street at its July 14 meeting. The new building, at 333 Michigan, will be next to Grand Valley's Cook-DeVos Center for Health Sciences and within a block of Raleigh J. Finkelstein Hall, currently under construction on Lafayette Avenue.

The new $70 million building project will create additional spaces for health professions and nursing programs. Construction is scheduled to begin in June 2018, with the opening set for May 2021. Finkelstein Hall is 84,000 square feet and will be completed next May.

“This approval is a major turning point for Grand Valley’s health programs,” said Provost Maria Cimitile. “Demand has exceeded our ability to accept highly qualified students, and these two new buildings, right in the middle of the city’s vibrant medical community, will provide exceptional opportunities for more students to attend Grand Valley. This combination makes our graduates highly employable by area hospitals and medical facilities.”

Grand Valley is the leading provider of health care professionals in the region, and the project received authorization from the Michigan Legislature. The state approved a capital outlay request of $29 million for the five-story, 160,000-square-foot building. The rest of the funds will come from private donors and university bonds.

The new building will be attached to the existing CHS building, located on the Medical Mile.

Engineering gets boost from building purchase

The Board of Trustees, during a special meeting on June 21, approved the purchase of the Ferris Coffee and Nut facility in downtown Grand Rapids, with plans to expand the university’s engineering programs.

The purchase of the Ferris facility, at 227 Winter Ave., for $6.5 million allows the university to begin planning what will be the Padnos College of Engineering and Computing’s Design and Innovation Center. It allows the university to avoid the delays and expense of constructing a new facility or taking a short-term approach by expanding existing facilities.

Paul Plotkowski, dean of the College of Engineering and Computing, said engineering enrollment has more than doubled in the last 10 years.

“This facility is move-in ready and perfectly located near our downtown campus, on a bus line and near where our students live,” Plotkowski said. “We’re excited to plan and develop spaces where students from multiple disciplines will work together and develop projects for our industry partners. This is a game-changer for us in terms of opening up potential to be innovative while providing an exceptional talent pipeline to employers.”

Ferris Coffee and Nut is remodeling another facility and will move its operations; Grand Valley is planning on moving into the 63,385-square-foot facility in summer 2018. The retail coffee shop that currently operates is expected to remain open to the public.

Grand Valley leaders announced the launch of the Laker Effect comprehensive campaign June 7. The campaign will provide increased support for students and allow university programs and facilities to stay current with changing needs of employers.

With a fundraising goal of $85 million, the campaign will address three primary areas of need: opportunity, achievement and relevance.

“Our strategic plan inspires and compels us to ensure our students are enabled and successful, and our programs are relevant for their future and the future of our region and our state,” said President Thomas J. Haas. “We appreciate the investment from all our donors and supporters in this campaign, as it will allow us to accomplish our goals and outcomes.” 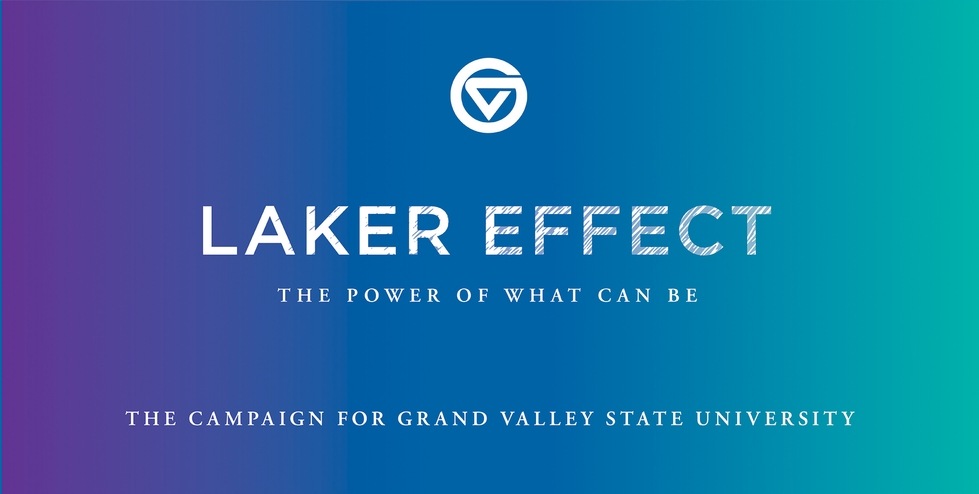 The first goal of the campaign is to increase donor-funded scholarships. These scholarships will help provide access for students attending Grand Valley, and represents $25 million of the total budget. This goal, named Opportunity, will allow students to take the first step toward realizing their Laker Effect.

The second goal of the campaign is to increase the resources and programs aimed at student success, ensuring that every student has the resources they most need. With a focus on Achievement through graduation, this represents $8 million of the total goal.

The final goal is to increase investment in academic programs and facilities, so that Grand Valley meets the changing needs of students and the community. This includes the health campus expansion, initiated by the construction of Raleigh J. Finkelstein Hall. This investment in Relevance represents $52 million of the total goal.

Two surprises were in store for members of the Class of 1967 who participated in their 50th reunion June 23-24.

Mark Zumberge, youngest son of James Zumberge, Grand Valley’s first president, spoke at a luncheon that was held in a tent made to replicate the setting of the first commencement ceremony in 1967.

Zumberge is a research geophysicist at the Scripps Institution of Oceanography, University of California, San Diego. He lived in Michigan from 1962-1969, when his father left Grand Valley for the University of Arizona.

Fifty-one people from the 138-member class attended the reunion. Don Paton, member of the reunion planning committee, said Zumberge looks very much like his father.

“He reflected on the growth of the college and talked about the milestones as his father would relay them: getting ready for students, then the first class of students, then accreditation,” Paton said.

Diane Paton said reunion participants marched in pairs to the luncheon in the tent from Lake Michigan Hall, as they did 50 years ago to receive their diplomas. 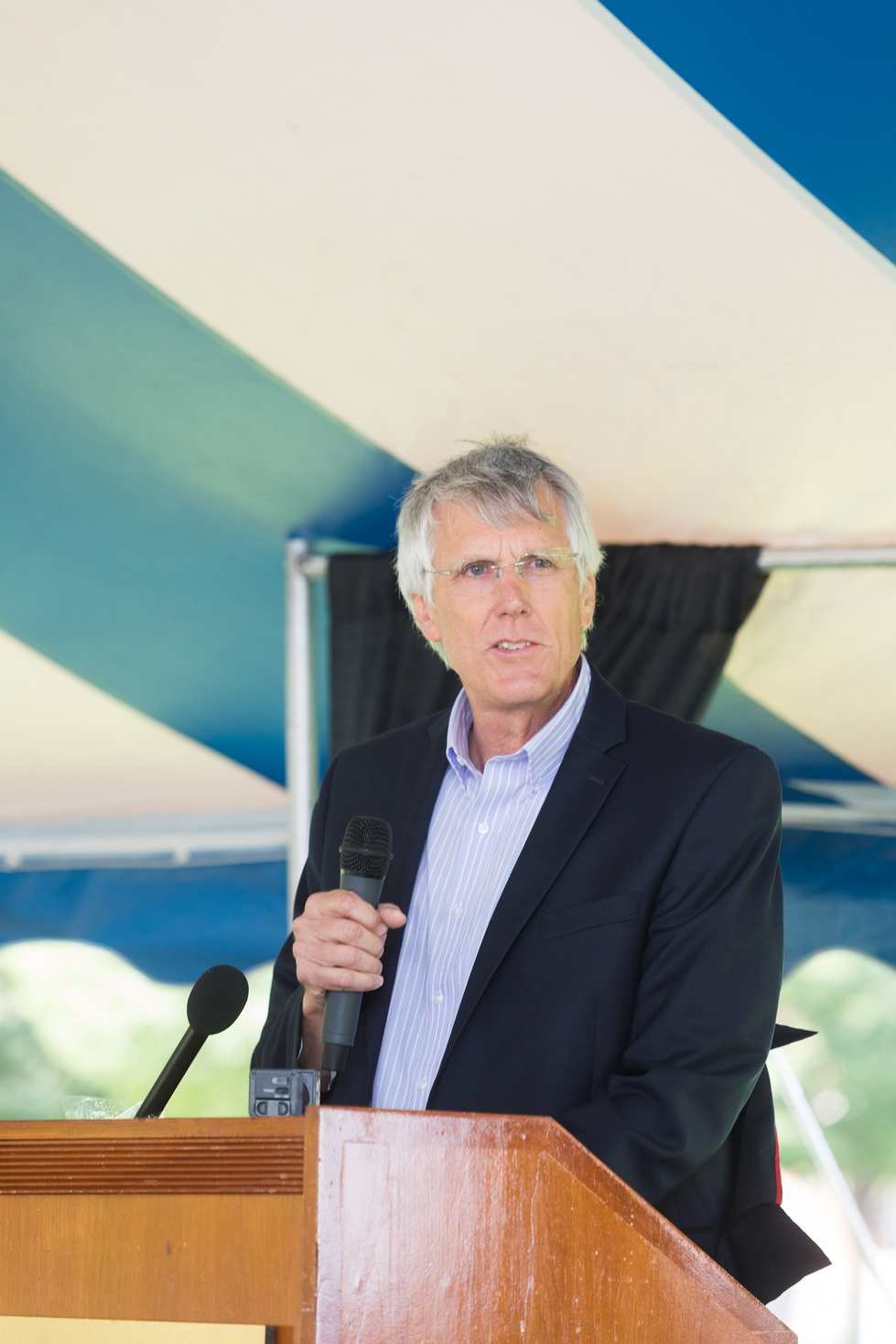 Mark Zumberge addresses the Class of 1967.


Page last modified September 1, 2017
Report a problem with this page