Jean Estebez-Figueroa, a first-grade teacher at Southwest Community Campus elementary school in Grand Rapids, was surprised with an entire library of books for her classroom.

Estebez-Figueroa is one of six area teachers who received hundreds of library books as part of the College of Education’s Classroom Library Book Grant program.

Faculty members Sheryl Vlietstra and Megan Freudigmann came up with the idea of seeking a grant as a way to help new teachers build their classroom libraries. “New teachers are excited to land their first job,” said Vlietstra. 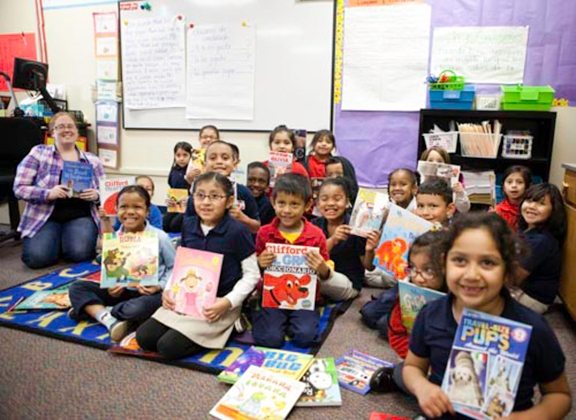 Students at Southwest Community Campus in Grand Rapids show their
excitement and surprise at library books presented to their teacher through the
College of Education’s Classroom Library Book Grant program.

“They arrive with lots of energy and great ideas but often find there aren’t any materials to help them teach. It can take new teachers several years of personal spending to develop a functional classroom library.”

The Classroom Library Book Grant program received a $2,500 Meemic Foundation for the Future of Education grant in February to help support the development of resources for new teacher classroom libraries. The program is open to alumni who began their elementary teaching careers within the last three years and who are teaching in underserved districts in the greater Grand Rapids area. 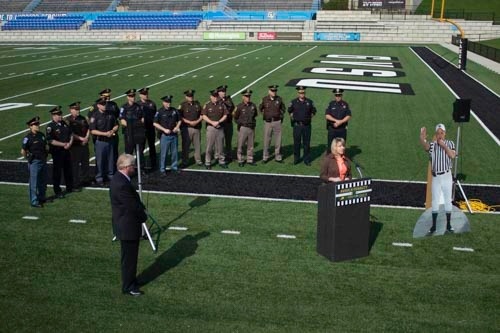 Law enforcement officials kick off the Click It or Ticket campaign at
Lubbers Stadium.

Law enforcement officials from Grand Valley, and Ottawa and Kent counties gathered on the Lubbers Stadium football field to help kick off the Click It or Ticket campaign. The seat belt enforcement campaign is sponsored by the Michigan Office of Highway Safety Planning.

The Michigan OHSP chose Lubbers Stadium as one of its kickoff sites because the theme of this year’s campaign is “Avoid a Penalty” and features a referee throwing penalty flags at unbuckled and improperly belted drivers.

Michigan’s 2013 seat belt use rate was 93 percent, down from a record high of 97.9 percent in 2009. Grand Valley Police Chief Renee Freeman said the campaign is about saving lives. Buckling up can reduce the risk of serious injury or death by 45 percent.

Diana Lawson, new dean of the Seidman College of Business, began her Grand Valley tenure July 1. Lawson served as dean and professor of marketing at the Herberger Business School at St. Cloud State University in Minnesota.

She will oversee a new major. At the July 11 Board of Trustees meeting, trustees approved the entrepreneurship major, which will meet the business community’s demand for students with more of that skill set.

Jeanne Arnold, vice president for Inclusion and Equity at the university, is leaving after nearly seven years in the post.

Arnold began building a team that would go on to make tremendous strides at Grand Valley. It was unusual for universities of Grand Valley’s size to put a diversity officer on the senior management team, but President Thomas J. Haas believed that was an important step.

Arnold has accepted the position of chief diversity officer at Gettysburg College, a private liberal arts college in Pennsylvania, in order to be closer to her family.

Haas said Arnold has had a positive impact on the climate and the culture at Grand Valley. “Jeanne embedded the values of inclusion and equity into the university’s strategic plan,” Haas said. “She remained focused on students, faculty and staff members by having a place for their voices to be heard. She connected with the community, and positioned us for a bright future because of the way she developed the responsibilities of her division. We wish her well in her new position.”

To celebrate National Nurses Week, the Kirkhof College of Nursing dedicated a World War II nurse’s uniform May 8 in the Cook-DeVos Center for Health Sciences.

The Army Nurse Corps uniform showcases a mid-length navy cape and a dress blazer complete with insignia. It will be housed at CHS. The uniform was donated by the family of Virginia M. Gottshall, a registered nurse from Toledo, Ohio, who was assigned to a military hospital in France in 1944.

Gottshall’s family contacted Martha Pituch, emeritus professor of nursing at the University of Toledo, looking for a home for the uniform. Pituch said she immediately thought of Yvette Petti, KCON associate dean for graduate programs. Pituch served as Petti’s nursing professor and mentor. 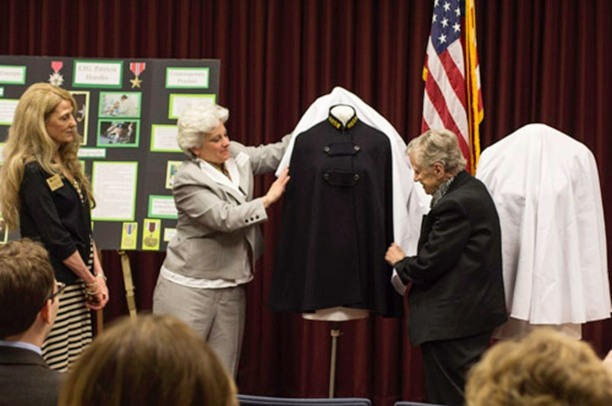 Grand Valley again became the only university in the state and one of 61 in the country to receive gold status after completing a sustainability assessment developed by the Association for the Advancement of Sustainability in Higher Education.

The Sustainability Tracking, Assessment and Rating System (STARS) is designed to gauge the progress of colleges and universities toward sustainability in all sectors, including education and research, operations, innovation and planning, and administration and engagement. Grand Valley joins gold STARS institutions such as Cornell, Colorado State and Stanford.

Of the 282 schools that currently hold a ranking nationwide, Grand Valley’s average score was higher than the national score. The self-reporting assessment included more than 900 questions. This is the third time Grand Valley has participated in the program. The university received gold status in 2013, up from silver status in 2011. The full report can be viewed by searching “Grand Valley” at https://stars.aashe.org/institutions/participants-and-reports/.

President Thomas J. Haas and GRCC President Steven C. Ender signed a 2+2 pre-major articulation agreement during a ceremony June 4 at GRCC. The agreement is designed to help GRCC students in a variety of programs experience a seamless transfer to Grand Valley.

Grand Valley was the first university in Michigan to sign a 2+2 articulation agreement with a community college when Grand Valley and GRCC signed an agreement in exercise science. With the June 4 signing, faculty members from both institutions will work together formalizing a set of GRCC courses that students need in order to complete a transfer to Grand Valley.

“This reduces cost and redundancy so students can get on with what they need to do, which is get into the classroom, engage with faculty and achieve the goal of earning a degree from now both institutions,” Haas said.

Ender called the college’s relationship to Grand Valley a “common law marriage.” “We’ve been in it a long time and now it’s time to go to the altar,” Ender said. “I am proud of the ways we have made it easier for our students to transfer. This has never been a competition. The goal has been to create clear pathways for students.”

There were few dry eyes in the house after former Laker football coach Brian Kelly and his wife, Paqui, announced their support for a Grand Valley scholarship that honors a Laker legend.

The Kelly Cares Foundation presented a $50,000 check to the Hosford Family Scholarship, which honors Jamie Hosford, a 12-time Laker letterwinner who died in March. The foundation held its annual golf outing June 23 at Blythefield Country Club.

Kelly, who coached the Lakers from 1991-2003, said his family continues to come back to West Michigan because “this is where we started our journey.” 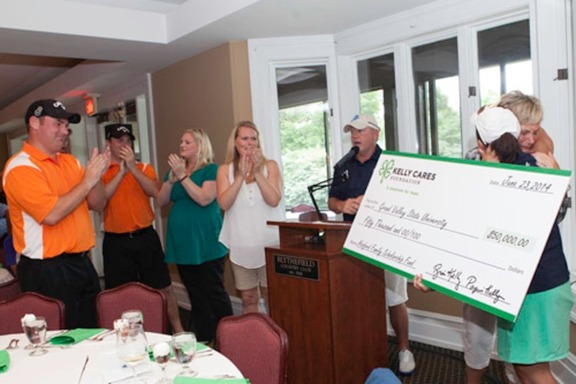 Gloria Hosford hugs Paqui Kelly following a donation from the Kelly Cares
Foundation to the Hosford Family Scholarship fund. Brian Kelly is at the podium, the Hosford family is at left.

“The foundation started here and we wanted to come back here to help out,” said Kelly, head coach at the University of Notre Dame. He said education was important to Hosford, a longtime Rockford Public Schools administrator, and supporting education is one of the Kelly Cares hallmarks.

Dan and Tom Hosford played for Kelly on the first Grand Valley national championship team (2002). Dan Hosford said his family was planning a scholarship to honor Jamie before he died. The Kelly Cares support means the scholarship can be awarded in the fall of 2015.

The Hosford Family Scholarship will be awarded to qualified students from Rockford High School.

For more about the Kelly Cares Foundation, visit www.kellycaresfoundation.org.

Chuck Furman, one of the original employees of WGVU, died May 16. He was 73.

Furman dedicated his life to Public Television and WGVU. His family was also heavily involved including his wife, Judy, and their sons, David and Daniel. After earning a master’s degree in broadcast journalism at Penn State in 1966, Furman embarked on a career that would become his true calling in television — the newly founded Public Broadcasting Service. His first job with PBS was producer/director at WBGU Channel 70 at Bowling Green State University.

In 1972, a colleague told Furman he was moving to Grand Rapids to help start a PBS station and he wanted Furman to join him. Furman made the move and worked to develop the initial operation components for WGVU, becoming the station’s first program manager. Eight years later, Furman was named assistant general manager in charge of community relations, a position he held until his retirement in 2005.

“Chuck started his career when things like videotape and cable television were new and revolutionary,” said Michael Walenta, WGVU general manager. “At the time of his retirement, he had been part of the transition to digital platforms and high definition. He worked with it all — something few broadcasters can say.” 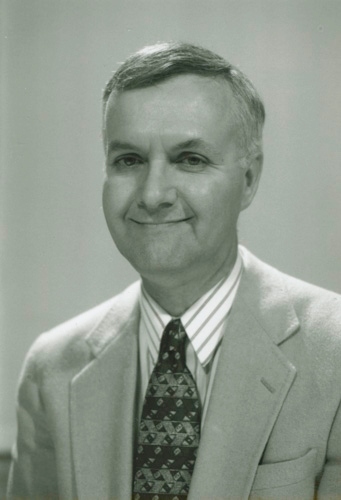 
Page last modified April 24, 2017
Report a problem with this page