A team of their own

When thinking about professional baseball in the U.S., teams like the Detroit Tigers, New York Yankees, Chicago Cubs or Boston Red Sox may sound more familiar than the Grand Rapids Chicks or Muskegon Lassies. That’s because the latter are names of women’s baseball teams that competed in the All-American Girls Professional Baseball League during World War II.

For the past seven years, Grand Valley students, faculty members and alumni have collaborated to produce a documentary about the AAGPBL and its impact on women in sports.

“A Team of Their Own: The First Professional Baseball League for Women” includes interviews with more than 40 women who describe their careers traveling with the league. James Smither, co-producer and Grand Valley Veterans History Project director, said many of the women entered the league while in their teens.

“They were, at the age of 15 or 16, doing something that was virtually unheard of for grown women to do,” Smither said. “These women tell their stories in ways that all sorts of people will find engaging, and may be meaningful for young women wanting to do things that go beyond what most people think they should be doing, or are capable of doing.”

The AAGPBL, developed by former Chicago Cubs’ owner Philip K. Wrigley in 1943, existed for 12 years. The Grand Rapids Chicks played in Michigan from 1945 until the league folded in 1954.

The team won the league championship in 1953 and played most of their games next to the old Grand Rapids South High School located on Hall Street, which is now the Gerald R. Ford Job Corps. The Muskegon Lassies joined the league in 1946 before relocating and becoming the Kalamazoo Lassies in 1950. 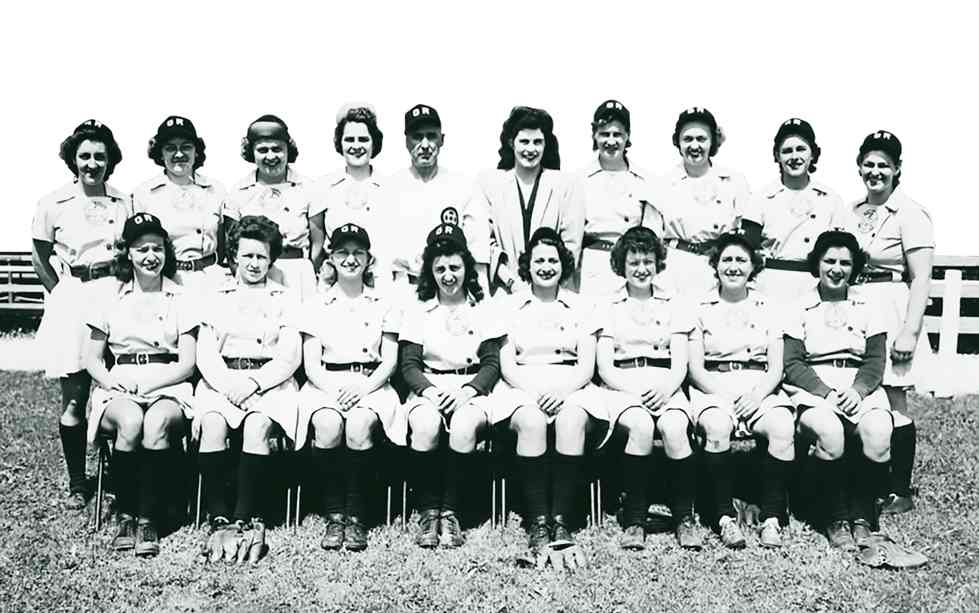 The Grand Rapids Chicks pose for a team photo in 1945, when the team was established.
photo courtesy of Northern Indiana Center for History

The project began with a desire by Frank Boring, co-producer and affiliate professor of communications, to capture stories from these women for historical and archival purposes. After learning about the Grand Rapids Chicks, Boring began collecting interviews with the four remaining players at that time. The week following the interviews, one of the Chicks died.

“I saw the need to interview more of these extraordinary women before it was too late,” Boring said. “The women were very well-known because of the 1992 film ‘A League of Their Own,’ but nobody was really recording their individual stories.”

Grand Valley’s production team wasn’t the first to approach the league to create a similar documentary, but the university’s team was the first to actually complete it. 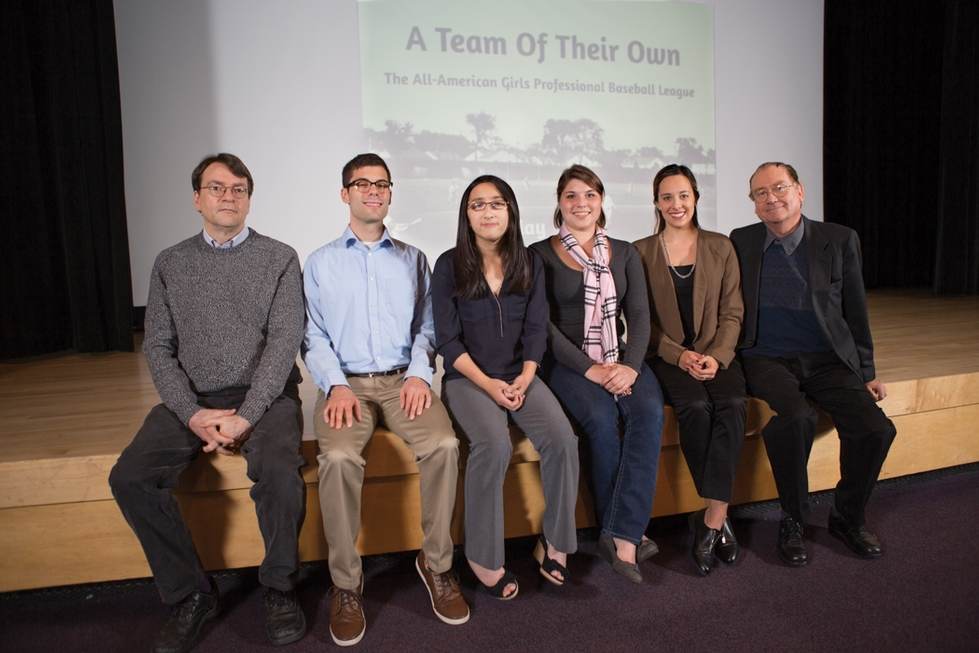 “If it were not for the efforts of Frank Boring, Jim Smither and their team, this story would have literally slipped away,” said Donna McLin, former AAGPBL president and current chair of the licensing and contracts committee. “It was not until the Grand Valley team became involved that it became apparent the talent, expertise and dedication were in place to make it happen.”

To bring his vision to fruition, Boring enlisted a team of his own in 2008: the GVSU Veterans History Project. The Veterans History Project has served as an archiving and collecting partner with the Library of Congress since 2006. With assistance from educational institutions, libraries, museums and historical societies, the project has collected and preserved the stories of U.S. veterans and other participants of the American experience during times of war.

Since the documentary’s production began, Boring and Smither have enlisted the assistance of about 20 Grand Valley students. The students have filled roles ranging from conducting historical research and filming interviews to planning and executing screenings across the U.S.

To begin collecting the stories of the former players, Boring, Smither and their team of students attended AAGPBL reunions in Milwaukee in 2009 and Detroit in 2010. The team also traveled to several museums, libraries, historical societies, archival companies and universities across the U.S. for their research.

“Each person makes their own mark on history, no matter how visible that mark might be,” said Erin Harkness, senior information systems major and Web designer for the documentary’s website. “We are bringing local history into the light and it’s an honor for us to help tell these women’s stories.”

Melissa Nickels, former film and video production major from Deshler, Ohio, joined the project as an intern in 2014 to not only help conduct research but to digitize interviews, organize the editing workflow and collaborate with the scriptwriter, narrator and composer.

“To be able to jump on board the project when the ball was already rolling and the film was going into the production phase made me feel fortunate because I was in the right place at the right time,” Nickels said. “I went from working on projects with other students in classes to doing a project with professionals, and I was also treated as a professional.”

After graduating from Grand Valley in 2014, both Nickels and James Christie, film and video production major from Farmington Hills, were hired to continue their work with the documentary with Christie continuing his role as the film’s editor.

The editing process was no small feat as the pair had to creatively weave together sound bites from the 46 individual interviews that were each roughly an hour in length. 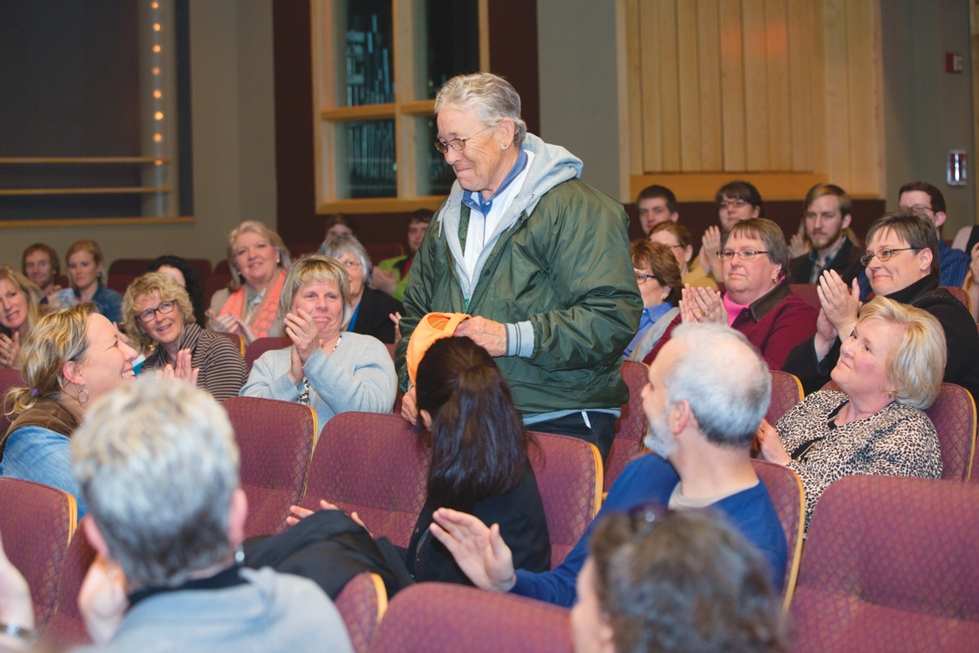 Rosemary Stevenson, former Grand Rapids Chicks player during the league’s final season in 1954, was honored during a screening at the Grand Rapids Public Museum in 2015.

“There are so many ways that a story can be told and this film is comprised of numerous women, each with unique life experiences that span the length of many years,” Christie said. “I like to think of editing a film as a giant puzzle that can be put together in a number of ways. When you finally find that perfect quote or visual, it’s a triumph.”

Since its completion, the documentary team has been traveling across the country screening “A Team of Their Own” in most cities that AAGPBL teams called home.

During her time as a public relations intern for the project from December 2014 to April 2015, Paige Anderson conducted preliminary research for the screenings, including travel costs and assembling a list of theaters, libraries, museums and ball parks in each of the towns that had league teams. 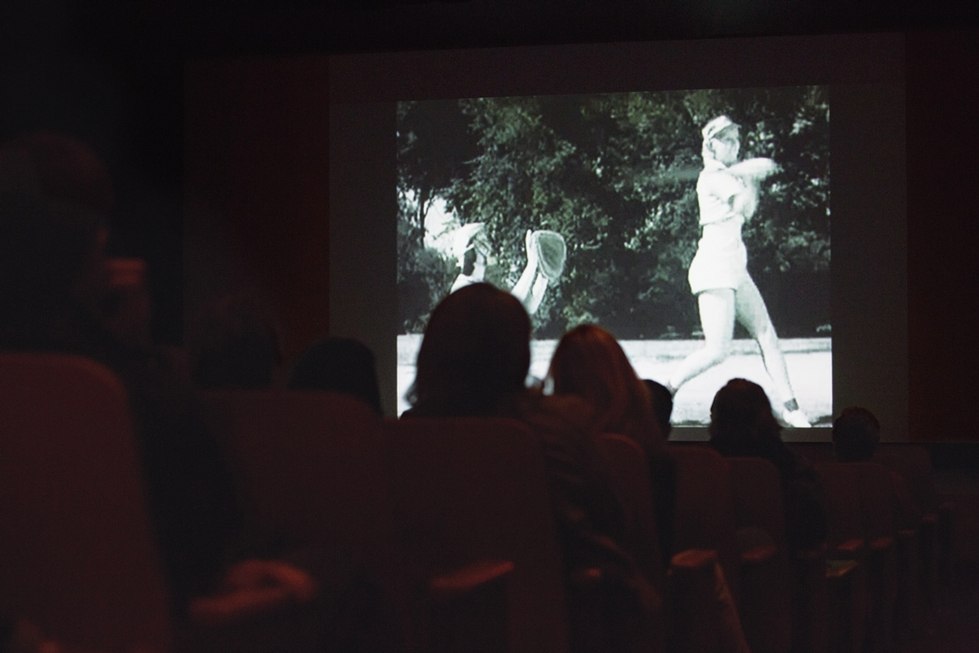 Above, community members watch ‘A Team of Their Own’ during a premiere screening at the Grand Rapids Public Museum in November.

Andrea Lenneman also began her time with the project as an intern working in public relations, but was eventually hired after graduating in April 2015 to focus on event coordination and graphic design. The DeWitt native designed the promotional posters, flyers, programs, DVD covers and the initial logo for the documentary.

“All of my art classes at Grand Valley prepared me to not only understand graphic design, but also the software needed to create a successful advertisement while managing the overall stresses of multiple deadlines,” Lenneman said.

McLin said it is particularly meaningful to the AAGPBL Players Association that the documentary is being shown in most of the cities that hosted teams.

“These cities hold a special place in the hearts of the women, for it was in those cities their dreams came true,” McLin said. “Every aspect of this experience has been a joy for our organization. We always felt the documentary team from Grand Valley was truly interested in our ‘story’ as individuals, as athletes and as participants in the war effort.”

Full interviews with each AAGPBL player, as well as scheduled screenings and additional information, are available on gvsu.edu/wibdoc.