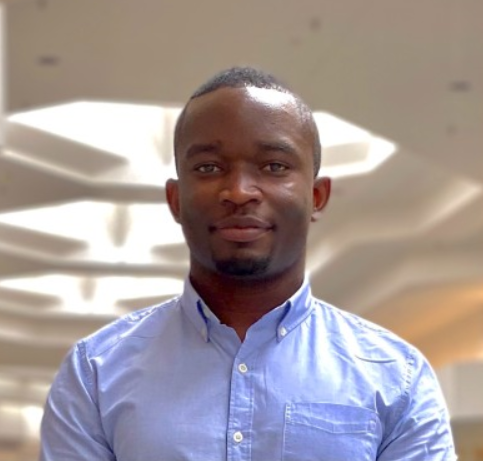 Busuyi came to Grand Valley from Ibadan, Nigeria.  Ibadan is the capital of Oyo State and is the third largest city in Nigeria.  He began his undergraduate studies at Bowen University as a computer science major, but became interested in statistics early on and quickly changed his major.  Upon graduation, Busuyi wanted to further his statistical background so that he could work with medical and biological data, and a Google search led him the Biostatistics program at GVSU.

Busuyi’s degree in statistics prepared him for the biostats curriculum, but he found that his knowledge of SAS wasn’t as advanced as necessary.  Through hard work, he was able to bring himself up to speed on SAS in his first six weeks in the program, and he took off from there. Busuyi was one of three biostatistics students selected to intern with the Research Administration department at Spectrum Health, where he works with nurses, physicians, and other hospital personnel on clinical projects.  One of the best aspects of the internship is the opportunity to work in multidisciplinary teams, but that’s also one of the biggest challenges since not everyone has a strong background in statistics.  He has also learned that projects run far more smoothly when statisticians are included in the design phase!

Busuyi’s statistical knowledge has developed tremendously during his time in the Biostatistics program.  As a result of his classwork and internship, he is now proficient in SAS, R, JMP, and SPSS, and has learned how and when to use statistical tests such as Multivariate Regression, Logistic Regression, Poisson Regression, and ANOVA.  He has also gained experience in designing and building models for clinical trials experiments through his internship at Spectrum.

In the future, Busuyi would like to do his own research on the underlying problems of healthcare.  But for now he wants to continue working as a research analyst doing biostatistics in order to prepare himself for that future.  His time in Grand Rapids has been enjoyable, so much so that he might consider staying despite the cold winters (record low in Ibadan is 50 °F!).  But he’s open to going wherever things take him, and he thanks God for all of his achievements and accomplishments so far.

Return to the listing of student/alumni profiles.


Page last modified February 4, 2016
Report a problem with this page