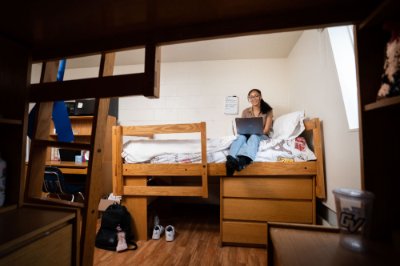 Now a first-year student, Sarah Conway vividly remembers lying in a hospital bed when she was 14, gathering up courage to look at her amputated leg.

"At the hospital, I avoided looking at it for a long time. When I finally did see it, I went through an identity crisis," Conway said. "It was so weird to see myself like that."

Conway, a native of Benton Harbor, was 13 when she looked in a full-length mirror and noticed her right leg was much bigger than her left.

"I was as skinny as a toothpick, so it really stood out. I showed my mom and we went to my doctor, thinking it might be an allergy or something, but my leg only kept getting bigger," she said.

A series of ultrasounds, scans and x-rays were inconclusive; then Conway underwent an MRI.

"Fifteen minutes after leaving the MRI appointment, we were called back to the hospital," she said. "They found an abnormal mass in my leg, a fast-growing tumor."

Conway was diagnosed with osteosarcoma, an aggressive form of bone cancer, in her right fibula. Her doctor recommended rounds of chemotherapy to hopefully shrink the mass. She remembered it was summer. 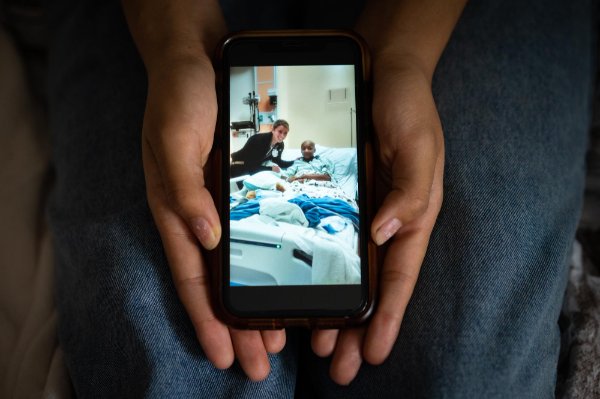 Sarah Conway shows a photo of herself in the hospital with nurse Alyssa Iacoboni, who also had an above-knee amputation when she was a teenager.
Image Credit: Amanda Pitts

"Getting chemo was terrible. What bothered me the most was the hair loss; it's terrible to say that, but losing my hair really bothered me. I was also nauseous, had headaches and pain, plus a loss of appetite," she said.

Conway did not join her classmates when school started that fall; she kept up at home, with the help of a teacher at Helen DeVos Children's Hospital. Nearly a year later, in 2017, her doctors said chemotherapy was not adequate and recommended amputation. Conway was 14 then.

"The word 'amputation' really took me back. That never even crossed my mind, I thought there would eventually be a surgery to remove the tumor and that would be it," she said.

Her parents sought two other medical opinions, but the answer was the same. "All I thought of was, 'Well, that's the end of cross country, track and basketball," Conway said.

At DeVos Children's Hospital, Conway could see Grand Valley's Cook-DeVos Center for Health Sciences and said it was a view she got used to seeing. She also grew close to some of the nurses who cared for her, and began to see a career path.

"In middle school, I never thought any kind of job in the medical field was for me," she said. "But given my experience, the nurses were like my second family.

"I would almost enjoy going to the hospital for appointments when I knew certain nurses would be there. I met a nurse, Alyssa Iacoboni, who also had an above-knee amputation when she was my age.

“Despite what she went through, she became a successful nurse and it was so inspiring. I want to be that certain nurse for someone." 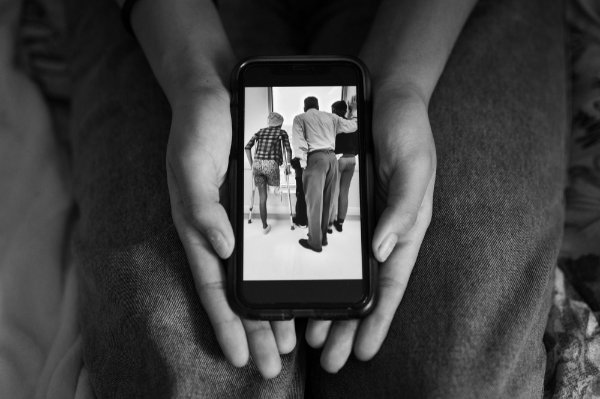 The amputation surgery was in November, Conway spent a week in the hospital. She then spent three months in physical therapy, learning how to balance, stand and walk with a prosthetic leg. She's now on her second prosthetic.

"All beginning prosthetics are similar, I've learned the knee is really important. My first one was really basic; I had to latch and lock it up to my hip," she said. "I now have a better knee and better calf. If I wear skinny jeans or joggers, it looks normal.

"I don't try to hide my prosthetic. I still don't like climbing a lot of stairs."

Conway returned to school in April 2018, with a few months of eighth grade left. It was a difficult adjustment but by the time she got to high school Conway said she felt better — physically and mentally — and had a better outlook. She joined several student clubs at Lakeshore High School and began to prepare herself for college.

Grand Valley checked many of Conway's boxes. It was close to her home, offered nursing and the housing accommodations she wanted: a first-floor room near the restroom. "At night, it still takes me time to strap on my leg," she said.

For traditional bachelor's degree students, the Kirkhof College of Nursing is a secondary admit program. But pre-nursing students like Conway already connect with the program before they are officially admitted. 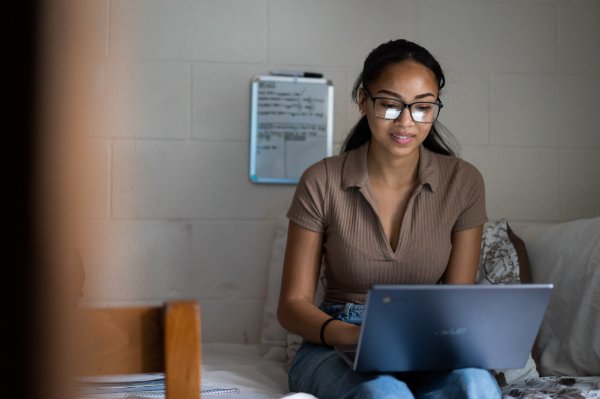 Grand Valley checked many boxes for Sarah Conway. It was close to her home, offered nursing and the housing accommodations she wanted: a first-floor room near the restroom.
Image Credit: Amanda Pitts

"It’s so important to initiate the relationship building process with new students," Norton said. "Academic advisors are an important resource because we can work with students to support both their academic and personal success and connect them with broader university resources."

Every six months, Conway needs to return to the hospital for scans to see if any cancer has returned and to meet with her pediatric oncologist, Dr. Sharon Smith. While there, she will occasionally see some of her favorite nurses. Her doctor and nurses are, of course, pleased to see Conway doing so well.

And so is she.

"My 13-year-old self couldn't imagine what I've been able to achieve," she said. 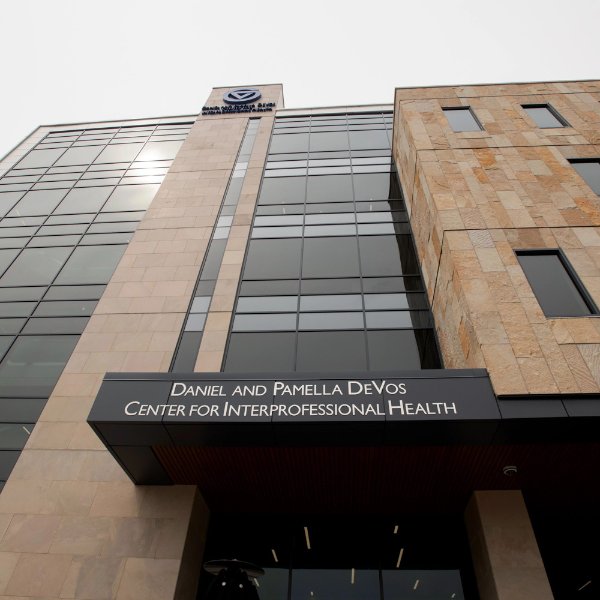 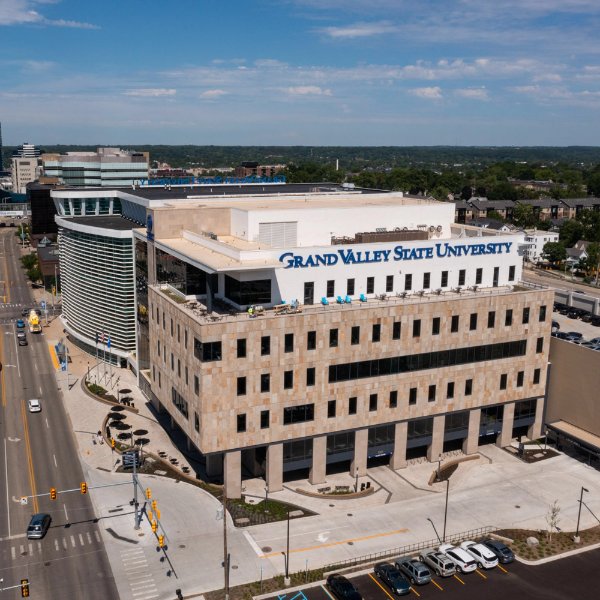 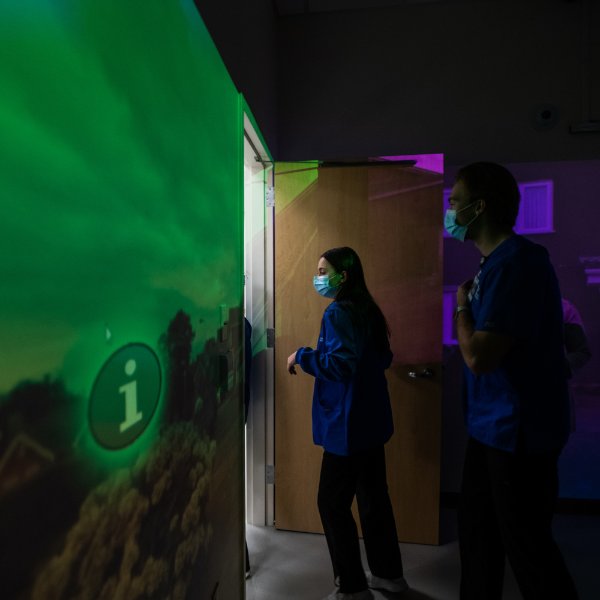