Graduate, a Chicago educator, savoring surprise video call from Obama to thank him for his dedication to teaching 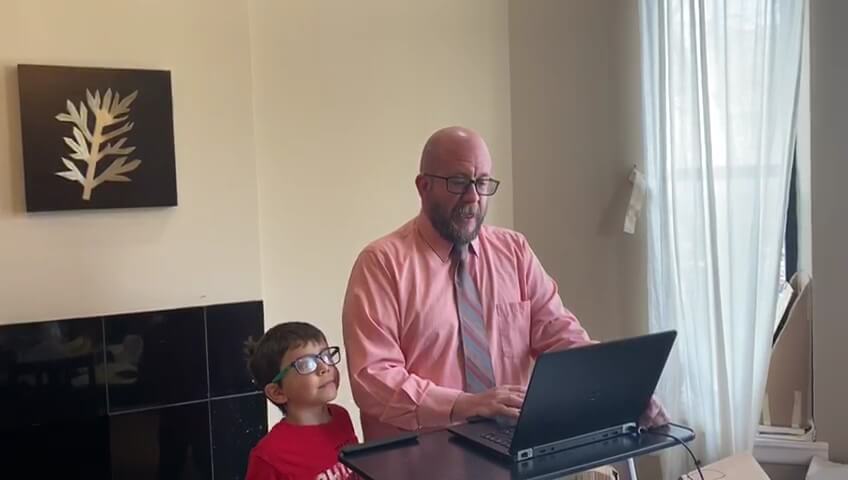 Daniel Michmerhuizen, '00, was honored to learn he had been chosen by the Obama Foundation to receive a special video call to coincide with National Teacher Appreciation Week.

Michmerhuizen figured if he was lucky, he may get a chance to talk with Arne Duncan, who served as secretary of education under President Barack Obama. Or maybe he would view a pre-recorded message. And then, as the Zoom call was beginning, the screen changed to show that he was going to speak with former President Obama.

"It's him! It's him!" Michmerhuizen exclaimed, sending his family into a happy frenzy at their Chicago home.

The first few moments were a blur, said Michmerhuizen, a longtime Chicago Public Schools secondary civics teacher who earned his Grand Valley degree in group social studies with an emphasis in political science. His minor was English and he earned secondary education certification in both subjects.

Obama quickly put him at ease, he said. And when he started talking to Obama about his passion for educating students at Benito Juarez Community Academy, especially in the remote learning environment brought on by the COVID-19 pandemic, Michmerhuizen referenced his guiding principle as an educator that he first learned from one of his instructors at Grand Valley.

"Students don’t really care about how much you know about something until they know how much you care about them," Michmerhuizen said. "That shaped my teaching pedagogy in more ways than any instructional manual could."

Michmerhuizen and Obama talked about the specific challenges many of Michmerhuizen's students face. In the video, Michmerhuizen told Obama how inspired he is by students' grit and determination. "My kids are incredibly resilient. I am moved to tears on a regular basis," he said.

For his part, Obama indicated during the video that Michmerhuizen's dedication resonated with him. "If I ever get too down and out, I'm gonna have to tune in to you so that I can get geared back up," Obama said.

Michmerhuizen said later he regularly draws on the wisdom he received from his Grand Valley instructors as he carries out a philosophy of seeing his students as individuals with whom he can forge a learning relationship. He strives to show his students through their civics education the effect they, along with anyone else, can have in society.

"These kids have more power than they realize," Michmerhuizen said. "Because of poverty, age, socioeconomics, immigration, many think they don’t have agency, but I tell them there are other ways you have power and agency in society. They can affect society even if they're only 14 or 15 years old."

When he is in his classroom, Michmerhuizen teaches with a Grand Valley flag as a backdrop. He also urges his students to consider becoming a Laker, with some success so far.

And he is grateful that someone — he doesn't know who — was impressed enough by his work to nominate him for the call with Obama, giving Michmerhuizen an unforgettable thrill.

"All week, I've been on cloud nine," Michmerhuizen said.