Researcher studying whether food production could be safer with new E. Coli test 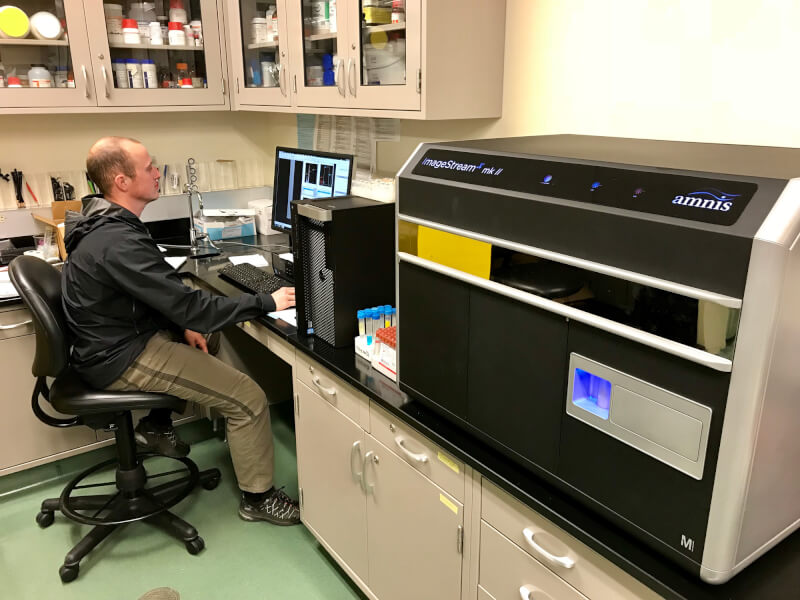 A Grand Valley researcher has been awarded nearly $100,000 to study the effectiveness of a new method of detecting E. Coli bacteria that could improve the safety of agricultural food production in Michigan.

Kevin Strychar, an ecological researcher at Grand Valley's Annis Water Resources Institute in Muskegon, was awarded the $96,007 grant by the Michigan Department of Agriculture and Rural Development to test the use of an imaging flow cytometer — a tool that can sample thousands of cells per second with a laser, and identify and mark specified pathogens — to discover E. Coli contamination in food as it's being brought to production from harvest. The technique that's being tested can result in positive E. Coli identification within minutes or seconds, rather than hours or days like current testing methods. The testing could also include identifying pathogens in the water being used to irrigate crops, thereby limiting the exposure in the first place.

"The benefit here is speed," said Strychar. "If we can successfully detect E. Coli in a sample within 60 seconds after it's brought in from a field, or detect other pathogens in the water being used for irrigation, it's much easier to fix those problems immediately before food is packaged and shipped and then must be recalled from all across the country. The advantage would be immediate."

Initial testing is ongoing in Strychar's lab, with the help of Darrick Gates, an undergraduate student studying biology.

"If it works in the lab, we'll bring in samples from a real field and test that, and if our results are good, there's a chance we'd get to pilot mobile units that could travel to different production facilities around the state," Gates said. "This testing has the potential to make agricultural food production safer and healthier, and increase profitability for farmers because of reduced recall costs and lost production time."

The grant was inspired by massive nationwide recalls on produce like lettuce and spinach that have sickened dozens across the country in recent months. The concern is that similar pathogen-based recalls could happen to staple Michigan crops, like apples, blueberries or cherries, among others.